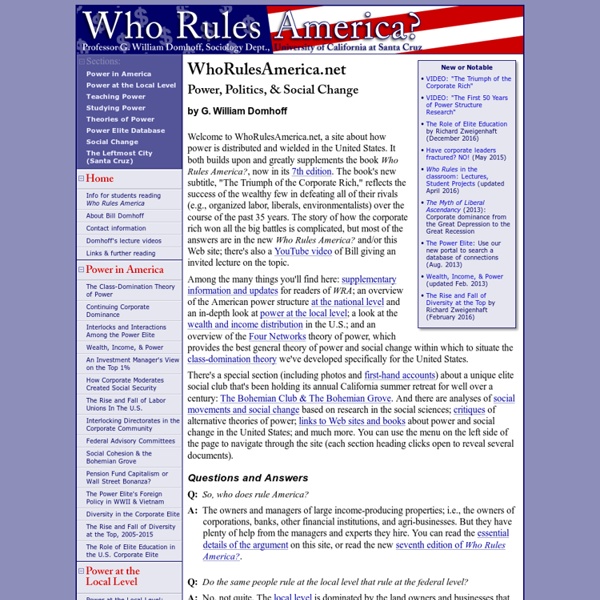 by G. William Domhoff Welcome to WhoRulesAmerica.net, a site about how power is distributed and wielded in the United States. It both builds upon and greatly supplements the book Who Rules America?, now in its 7th edition. The book's new subtitle, "The Triumph of the Corporate Rich," reflects the success of the wealthy few in defeating all of their rivals (e.g., organized labor, liberals, environmentalists) over the course of the past 35 years. Among the many things you'll find here: supplementary information and updates for readers of WRA; an overview of the American power structure at the national level and an in-depth look at power at the local level; a look at the wealth and income distribution in the U.S.; and an overview of the Four Networks theory of power, which provides the best general theory of power and social change within which to situate the class-domination theory we've developed specifically for the United States. Questions and Answers Q: So, who does rule America?

politics, films for action The World Trade Organization (WTO) held its Third Ministerial Conference in Seattle from November 30 to December 3, 1999. Tens of thousands of protesters managed to halt the summit with nonviolent tactics (such as blocking roads to the meetings by sitting... The Main Stream Media (MSM) have had a ratings bonanza with the tragic and untimely disappearance of Malaysia Flight MH370 and this video exposes all the related twists and turns in this yet unsolved tragedy involving Malaysia Airlines and Kuala Lumpur's... It has been over several day's since Flight MH370 has gone missing and Main Stream Media has totally avoided asking the hard questions.

Marx & Engels’ Collected Works . The following is a petition that recently appeared over at www.change.org, imploring the book publisher Lawrence & Wishart [L&W] to withdraw its demand that the Marxist Internet Archive [MIA] take down its transcriptions of Marx & Engels ‘Collected Works [MECW]. Like most of the petitions begun on that website, it will almost surely prove ineffectual. U.S. Should Not Meddle in Ukraine Ukraine is a dangerous situation because the U.S., at least verbally, is threatening Russia and because Putin and Obama, at least in public, analyze, understand and see the situation there in very different ways. We do not know what was said when Obama and Putin recently conversed at length by telephone. The U.S. and E.U. have embraced the revolution, while Russia does not see that riots are part of a democratic process. A key problem in Ukraine is that there is a strong right-wing, ultra-nationalist and neo-Nazi type party and other similar groups that have played a key role in generating the violence that brought down the government and breaking an agreement reached in late February. Putin’s rationale for a Russian presence in Ukraine includes reference to this destabilizing and violent element. On the other hand, the public statements of Kerry and Obama focus almost solely on Russia’s reactions and on generalities about democracy and the Ukrainian people.

It Doesn't Have to Be This Way "Induce people all to want the same thing, hate the same things, feel the same threat, then their behavior is already captive--you have acquired your consumers or your cannon-fodder."The potential for transformation can be expressed in one simple phrase: it doesn't have to be this way.The structures that benefit from dominating the current system maintain their dominance by convincing us that "the way it is" is inevitable and impervious to systemic change. That is the primary mythology that generates and maintains their dominance.The second level of dominance is created by persuading us that not only is the current "way the world works" inevitable, it is the best way possible because it enables self-expression and convenience via consumption.R.D. Laing described the essence of the hidden machinery of dominance in his bookThe Politics of Experience: “All those people who seek to control the behavior of large numbers of other people work on the experiences of those other people. 1.

Why Is It Necessary For The Federal Government To Turn The United States Into A Prison Camp? There has been no society in the history of the world that has ever been 100% safe. No matter how much money the federal government spends on "homeland security", the truth is that bad things will still happen. Our world is a very dangerous place and it is becoming increasingly unstable. The federal government could turn the entire country into one giant prison camp, but that would still not keep us safe. Cut in Food Stamps Targets Benefits Paid in Northeast, West Coast + Mich, Mont, Wisc & DC The LIHEAP Loophole or Heat and Eat SNAP benefits paid to recipients in 16 states and the District of Columbia are targeted by new budget cutting legislation proposed in Congress by a bipartisan conference made up of members from the House and Senate. Certain SNAP recipients in the following states would be affected if the legislation passes. California Connecticut Delaware District of Columbia Maine Massachusetts Michigan Montana New Hampshire New Jersey New York Oregon Pennsylvania Rhode Island Vermont Washington Wisconsin

What if a Muslim Company Used the 'Hobby Lobby' Decision to Impose Its Values on White Christians? The slide towards American theocracy was nudged one more step forward by today's Supreme Court decision in support of the "freedom" of corporations with "religious" beliefs to restrict the rights of their employees. In essence, religious "beliefs" trump the obligations, rights, and responsibilities that come with being members of the polity and a broader political community. The NY Times details the logic of the theocrats as: The 5-to-4 decision, which applied to two companies owned by Christian families, opened the door to challenges from other corporations to many laws that may be said to violate their religious liberty.