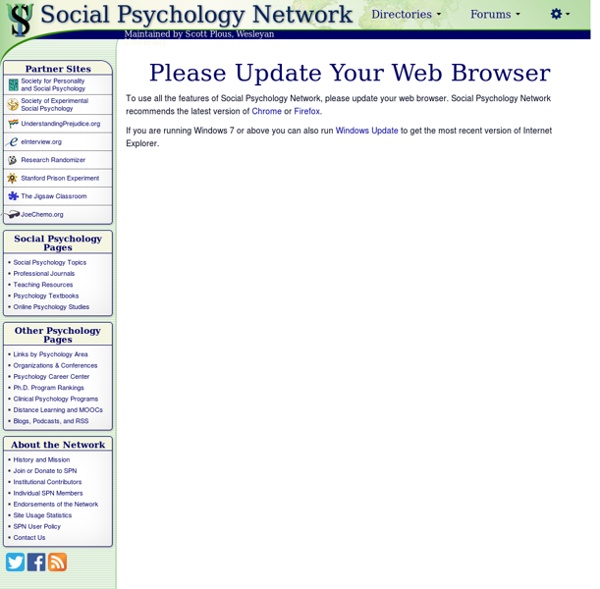 Related:  Sociology of Race and Ethnicity • tinakathryn • Things to Learn/Keep in Mind

Social psychology Social psychologists therefore deal with the factors that lead us to behave in a given way in the presence of others, and look at the conditions under which certain behavior/actions and feelings occur. Social psychology is concerned with the way these feelings, thoughts, beliefs, intentions and goals are constructed and how such psychological factors, in turn, influence our interactions with others. In addition to the split between psychology and sociology, there has been a somewhat less pronounced difference in emphasis between American social psychologists and European social psychologists. As a broad generalization, American researchers traditionally have focused more on the individual, whereas Europeans have paid more attention to group level phenomena (see group dynamics).[3][page needed] History[edit]

7 Life Changing Keys to Success Success does not belong to a select few; success belongs to “you,” if you’re willing to go after it. Success is never handed out, you must take it, but you don’t take it by force. You take success by becoming a successful person internally. List of cognitive biases Illustration by John Manoogian III (jm3).[1] Cognitive biases can be organized into four categories: biases that arise from too much information, not enough meaning, the need to act quickly, and the limits of memory. Cognitive biases are tendencies to think in certain ways that can lead to systematic deviations from a standard of rationality or good judgment, and are often studied in psychology and behavioral economics. There are also controversies over some of these biases as to whether they count as useless or irrational, or whether they result in useful attitudes or behavior. For example, when getting to know others, people tend to ask leading questions which seem biased towards confirming their assumptions about the person. However, this kind of confirmation bias has also been argued to be an example of social skill: a way to establish a connection with the other person.[8]

Group behaviour Group behaviour (or group behavior) in sociology refers to the situations where people interact in large or small groups. The field of group dynamics deals with small groups that may reach consensus and act in a coordinated way. Groups of a large number of people in a given area may act simultaneously to achieve a goal that differs from what individuals would do acting alone (herd behaviour).

Replication Effort Provokes Praise—And 'Bullying' Charges After a string of scandals involving accusations of misconduct and retracted papers, social psychology is engaged in intense self-examination—and the process is turning out to be painful. This week, a global network of nearly 100 researchers unveiled the results of an effort to replicate 27 well-known studies in the field. In more than half of the cases, the result was a partial or complete failure. As the replicators see it, the failed do-overs are a healthy corrective. Sociology of Race and Ethnicity By Ashley Crossman Race and ethnicity are important concepts in the field of sociology and are ones that are studied a great deal. Race plays a large role in everyday human interactions and sociologists want to study how, why, and what the outcomes are of these interactions. Sociologists look at many questions related to race and ethnicity, including:What is race? What is ethnicity?

100 Wedding Tips Every Bride Should Know Congrats! You're newly engaged and eager to dive in to planning the details of the big day. Before you get overwhelmed by the choices, costs and innumerable possibilities, read these tips that every bride should know. Planning 1. Cognitive bias Some cognitive biases are presumably adaptive. Cognitive biases may lead to more effective actions in a given context.[7] Furthermore, cognitive biases enable faster decisions when timeliness is more valuable than accuracy, as illustrated in heuristics.[8] Other cognitive biases are a "by-product" of human processing limitations,[9] resulting from a lack of appropriate mental mechanisms (bounded rationality), or simply from a limited capacity for information processing.[10][11] A continually evolving list of cognitive biases has been identified over the last six decades of research on human judgment and decision-making in cognitive science, social psychology, and behavioral economics.

Pearls Before Breakfast - washingtonpost.com HE EMERGED FROM THE METRO AT THE L'ENFANT PLAZA STATION AND POSITIONED HIMSELF AGAINST A WALL BESIDE A TRASH BASKET. By most measures, he was nondescript: a youngish white man in jeans, a long-sleeved T-shirt and a Washington Nationals baseball cap. From a small case, he removed a violin. Placing the open case at his feet, he shrewdly threw in a few dollars and pocket change as seed money, swiveled it to face pedestrian traffic, and began to play. It was 7:51 a.m. on Friday, January 12, the middle of the morning rush hour.

Open Science Collaboration Blog · Questions and Answers about the Förster case by Denny Borsboom, Han van der Maas, Eric-Jan Wagenmakers, Department of Psychological Methods, UvA By now, everyone is probably familiar with the recent investigation of the work of Dr. Förster, in which the Landelijk Orgaan Wetenschappelijke Integriteit (LOWI) concluded that data reported in a paper by Dr.

Sociological Theories of Prejudice and Racism Home >> Ethnicity >> Sociological Theories of Prejudice and Racism Functionalist theory argues that for race and ethnic relations to be functional and thus contribute to the harmonious conduct and stability of society, racial and ethnic minorities must assimilate into that society. Assimilation is a process by which a minority becomes socially, economically, and culturally absorbed within the dominant society.