If the World were 100 PEOPLE 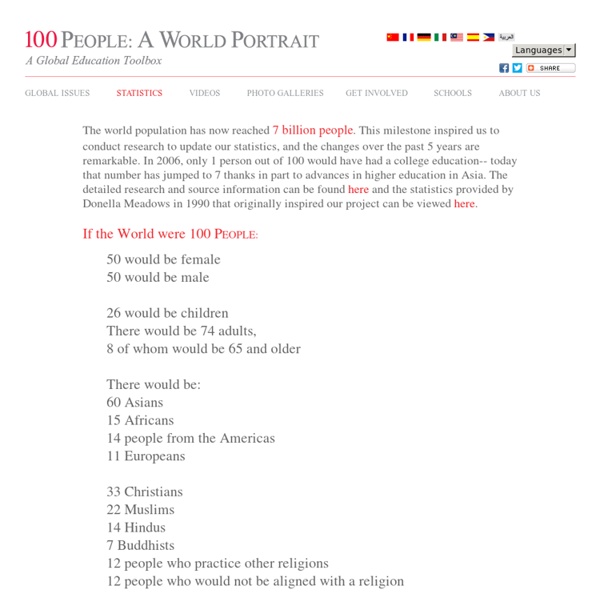 40 Maps They Didn’t Teach You In School By the time we graduate high school, we learn that they never taught us the most interesting things in there. Sure, you might be able to name the European countries or point New York on the map, but does that give a you real understanding of how the world functions? To fill this gap, we have gathered a great and informative selection of infographical maps that they should’ve shown us at school: every single one of these maps reveals different fun and interesting facts, which can actually help you draw some pretty interesting conclusions. Show Full Text What makes infographical maps so engaging is how easy it becomes to conceive graphically presented information. The best part, there are brilliant services like Target Map that “allow everyone (from individuals to large organizations) to represent their data on maps of any country in the world and to share their knowledge with the whole Internet Community.” Trust us, these are way better than the ones they taught you at school!

The World Factbook The surface of the Earth is approximately 70.9% water and 29.1% land. The former portion is divided into large bodies termed oceans. The World Factbook recognizes and describes five oceans, which are in decreasing order of size: the Pacific Ocean, Atlantic Ocean, Indian Ocean, Southern Ocean, and Arctic Ocean. Because of their immense size, the Pacific and Atlantic Oceans are generally divided at the equator into the North and South Pacific Oceans and the North and South Atlantic Oceans, thus creating seven major water bodies - the so-called "Seven Seas." Some 97.5% of the Earth's water is saltwater. In a 100-year period, a water molecule spends 98 years in the ocean, 20 months as ice, about two weeks in lakes and rivers, and less than a week in the atmosphere. Earth's land portion is generally divided into several, large, discrete landmasses termed continents. Asia usually incorporates all the islands of the Philippines, Malaysia, and Indonesia.

The Most Disproportionately Well-Paying Job in Each State 8513 25Share1 Click to enlarge Get rich quick schemes rarely go according to plan, so unfortunately you're going to have to do some work if you want to make it big. Still, if you want to get the most bang for your buck, you might want to check out what state is going to pay you the most for the same job. Business Insider found the jobs that make the most money in each state versus the national average. The Afternoon Map is a semi-regular feature in which we post maps and infographics. November 11, 2015 - 4:25pm ©2016 Mental Floss, Inc. ENFP Personality Types Each letter in the personality type code - E, N, F, and P - describes a preference for a way of thinking or behaving. There are eight styles and you use all of them, but ENFPs prefer: Extraversion (interacting with people) more than Introversion (thinking things through)iNtuition (perceiving new possibilities) more than Sensing (perceiving tangible facts)Feeling (making decisions using subjective values) more than Thinking (making decisions using objective logic)Perception (a flexible lifestyle) more than Judgement (an organised lifestyle) Find out how close your unique personality is to ENFP. If your closest personality type is ENFP then you are someone who senses the hidden potential in people. You enjoy starting discussion or activities that challenge and stimulate others into having new insights about themselves, which they can then take and apply to their own personal growth. Next: ENFP's Mental Functions By Steve Myers (Google+).

Origin of crops |click on pic by Colin K. Khoury, Harold A. Achicanoy, Carlos Navarro-Racines, Steven Sotelo, and Andy Jarvis at the International Center for Tropical Agriculture (CIAT). Version 1.0 (May 2016). This work is licensed under a Creative Commons Attribution 4.0 International (CC BY 4.0). This work is associated with the publication: Khoury CK, Achicanoy HA, Bjorkman AD, Navarro-Racines C, Guarino L, Flores-Palacios X, Engels JMM, Wiersema JH, Dempewolf H, Sotelo S, Ramírez-Villegas J, Castañeda-Álvarez NP, Fowler C, Jarvis A, Rieseberg LH, and Struik PC (2016). About the circular plots Each region has a color representing its own “native” crops and those colors are connected to other regions due the importance of those crops in the diets/agricultural production in other regions. Methods and code for the plots were derived from The Global Flow of People by Nikola Sander, Guy J. About the data

High School Study Tips - Ability "You cannot teach a man or woman anything; you can only help them to find it within themselves."Galileo "Just as eating against one's will is injurious to the health, so study without a liking for it spoils the memory, and it retains nothing it takes in."Leonardo Da Vinci The only way to make study work for you is to avoid BOREDOM - the worst enemy of learning. From a very early age, we vary what we do to stop ourselves getting bored. Over time we develop a concentration-span - the time between starting a task to the time we find our minds wandering. The brain receives information from our senses. If you are bored, short term memory is lost very quickly and so can never be passed on. The best way to learn is to limit study periods to the length of our concentration-span. Go to your study area and get settled. Now that you know what your own brain can cope with you can sort out your reading and revision to suit. study beyond your concentration-span. Finally, you must REVISE. For example: Or:

MapCrunch - Random Google Street View How Steelcase Redesigned the 21st Century College Classroom When it comes to creative office spaces, "collaboration" and "flexibility" are the bywords of the moment. Companies happily invest in modular furniture and open-plan layouts that make it easier for workers to actually, well, work together. So wouldn't it be natural for college campuses nationwide — the feeders of tomorrow's office workers — to create like-minded classrooms? The truth is, most college classrooms look shockingly similar to those that our parents and grandparents were educated in. You know exactly what we're talking about: those cavernous lecture halls, with podiums fronting endless rows of one-arm tablet desks. Steelcase's tech-enabled "LearnLabs" are trying to change that. What does a typical LearnLab look like? [media:scape tables] [A huddle board] One school to see positive results is Arizona State University. [You can't hide!] Another school is Richland College in Dallas. So why don't we see LearnLabs everywhere? There are now more than 80 LearnLabs around the country.

Mongolia Adopts An Innovative System of 3-Word Locations The idea is simple enough. Wouldn’t locations be easier to remember if we traded in complicated GPS coordinates for simple and memorable three-word phrases? That’s the idea behind what3words, a new system that—in the words of Big Think’s Frank Jacobs in his entertaining article on the system—is “doing for geolocation what domain names did for IP addresses.” That is, make them easier to share and to remember. (Read Frank’s article—it’s fun.) what3words has divided up the earth into 57 trillion three-by-three-meter squares and created an algorithm to assign each one a three-word name. You can also find the name of any location using their website’s interactive map. what3words estimates 4 billion people live in locations without a numbered street system, and it’s difficult for these people to open bank accounts, receive deliveries, or even be contacted. It’s not that surprising it’s Mongolia, well-monied these days thanks to its vast mineral deposits.

Latest Study Validates Testing, Forced Retrieval and SQRRR Good old-fashioned testing and a comprehensive reading theory developed in 1946 remain great learning tools. It is a practice born of yesteryear and quite frankly appears to be giving way to concept-mapping and other forms of study habits. But yet another new study has confirmed that the practice known as forced retrieval today continues to be one of the best methods for learning new material. In the latest report, “Retrieval Practice Produces More Learning than Elaborative Studying with Concept Mapping,” researchers Jeffrey D. Karpicke and Janell R. Blunt actually cast a negative light on one of the most popular current practices. And when these researchers say learning, they include three extremely important elements. But even more importantly than this retention, forced retrieval was deemed to be the best method for helping teach students to draw inferences as well as apply concepts to new settings. Forced Retrieval The Recent Study Why retrieval testing helps is still unknown.

A Real Map of the Middle East Could this map be any more different from the previous one discussed on this blog? That one dealt with the water, wetlands and shifting shorelines of Louisiana. This one zooms in on lines in the sand of the Middle-Eastern desert. Yet both maps do something similar: knowing that our current maps no longer reflect reality, they replace their conventional wisdom with a new cartography, based on the new facts on the ground. For Louisiana, that means a shoreline that bites much deeper inland. The Middle East has been in turmoil since the so-called Arab Spring of 2011, with the Syrian civil war as its bloodiest consequence. Here, the colonial-era boundary system known as Sykes-Picot has broken down, apparently permanently: few can envision a return to a unitary Syrian state – or a unitary Iraqi one, for that matter. The Syrian central government (in light grey), based in Damascus, controls a coastal strip of territory in a patchwork shared with a number of rebel forces.

How to make infographics: a beginner’s guide to data visualisation | Global Development Professionals Network As a growing number of international NGOs are using infographics, charts and interactive maps to share success and highlight disaster, how can organisations with less resources create high quality visualisations without having to pay to outsource them? We’ve put together a beginner’s guide for visualising development data. Organising your data The first thing you need to do is have a clear idea of the data you want to visualise. Are you trying to highlight a particular disparity between money spent in one place and another? Are you trying to show a volume of activity going on in one location? Let’s imagine I’m running a campaign calling for better sanitation worldwide. While I have data for over 10 years, I just want the figures for 2000 and 2012, so the first thing I need to do is remove any irrelevant columns and rows (tip: save a separate copy of the original first). Before... After... Once you’ve cleaned-up your data, you’re ready to visualise it. How to build a chart How to build a map