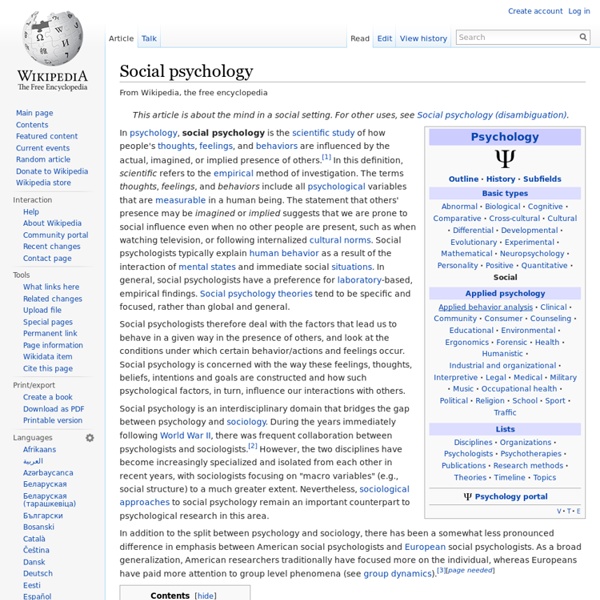 Social psychologists therefore deal with the factors that lead us to behave in a given way in the presence of others, and look at the conditions under which certain behavior/actions and feelings occur. Social psychology is concerned with the way these feelings, thoughts, beliefs, intentions and goals are constructed and how such psychological factors, in turn, influence our interactions with others. In addition to the split between psychology and sociology, there has been a somewhat less pronounced difference in emphasis between American social psychologists and European social psychologists. History[edit] Although there was some older treaties about social psychology such as those by Islamic philosopher Al-Farabi (Alpharabius).[4] The discipline of social psychology, as its modern day definition, began in the United States at the dawn of the 20th century. Intrapersonal phenomena[edit] Attitudes[edit] Persuasion[edit] Social cognition[edit] Heuristics are cognitive short cuts. Research[edit] Related:  Sociology of Race and Ethnicity • Psychology

Home The Happiness Hypothesis The Happiness Hypothesis: Finding Modern Truth in Ancient Wisdom is a 2006 psychology book by Jonathan Haidt written for a general audience. In it, Haidt poses several "Great Ideas" on happiness espoused by thinkers of the past - Plato, Buddha, Jesus and others - and examines them in the light of contemporary psychological research, extracting from them any lessons that still apply to our modern lives. Central to the book are the concepts of virtue, happiness, fulfillment, and meaning. Summary of Chapters[edit] Ch.1: The divided self[edit] Haidt looks at a number of ways of dividing the self that have existed since ancient times: mind vs bodyleft brain vs. right brain: (lateralisation of brain function)old brain vs. new brain (frontal cortex)controlled vs. automatic Haidt focuses on this last division, between the conscious/reasoned processes and automatic/implicit processes. Ch.2: Changing your mind[edit] Ch.3: Reciprocity with a vengeance[edit] Ch.4: The faults of others[edit] See also[edit]

Not Another Icebreaker! I was recently privy to a conversation about icebreakers—folks were exploring whether icebreakers are successful or not. I learned a lot about why some people love them and a lot of people hate them. On Thin Ice Lots of people hear the word "icebreaker" and cringe. Icebreakers are perceived as touchy-feely, frivolous, and a big waste of time. Others suggest the dislike of icebreakers may not be so much a reflection of the culture but of the individuals themselves. Still, despite their bad reputation, icebreakers remain a highly valued component of many learning sessions, no matter the age, level, or geographic location of the learners. The first suggestion to improve the effectiveness of icebreaker activities involves changing the name. What to Call Them? As a marketer myself, I am keenly aware of a brand in need of a makeover. Why Bother? Whatever you choose to call them, trainers around the world keep using icebreakers because they are powerful tools. The Right Way Tell them everything.

Helpful tips Jonathan Haidt Education and career[edit] Haidt was born in New York City and raised in Scarsdale, New York. He earned a BA in philosophy from Yale University in 1985, and a PhD in psychology from the University of Pennsylvania in 1992. He then studied cultural psychology at the University of Chicago as a post-doctoral fellow. His supervisors were Jonathan Baron and Alan Fiske (at the University of Pennsylvania,) and cultural anthropologist Richard Shweder (University of Chicago). During his post-doctoral appointment, Haidt won a Fulbright fellowship to fund three months of research on morality in Orissa, India. In 1999 Haidt became active in the new field of positive psychology, studying positive moral emotions. Research Contributions[edit] Haidt’s research on morality has led to publications and theoretical advances in four primary areas: The Social Intuitionist Model[edit] Haidt’s principle line of research since graduate school has been on the nature and mechanisms of moral judgment. Criticism[edit]

What is the new sociology of Ideas ? A Discussion with Charles Camic and Neil Gross - Transeo Review Humanities are not so common an object of investigation for social scientists. Other disciplines (intellectual history, political science or even philosophy) tend to challenge the accounts produced by sociologists. Moreover, the sophistication of disciplines such as philosophy or economic analysis can sometimes be a barrier for sociologists working on them. Charles Camic : Although I “turned” about 10 years ago to using the expression “sociology of ideas” to describe my work, I’ve actually been doing research in this vein onward from my time in graduate school. When I was a sociology graduate student at the University of Chicago in the mid-1970s, my initial interests were social theory and the sociology of education. As I began reading the sparse literature that then made up the sociology of knowledge, however, I was quickly disabused of this expectation. Neil Gross : Any sociologist of ideas worth his salt will naturally be suspicious of the autobiographical narratives of intellectuals.

Sociology of Race and Ethnicity By Ashley Crossman Race and ethnicity are important concepts in the field of sociology and are ones that are studied a great deal. Race plays a large role in everyday human interactions and sociologists want to study how, why, and what the outcomes are of these interactions. Sociologists look at many questions related to race and ethnicity, including:What is race? What is the difference between race and ethnicity? Within sociology, the terms race, ethnicity, minority, and dominant group all have very specific and different meanings. An ethnic group is a social category of people who share a common culture, such as a common language, a common religion, or common norms, customs, practices, and history. Ethnic groups have a consciousness of their common cultural bond. Like ethnicity, race is primarily, though not exclusively, a socially constructed category. Major Sociological Theories of Race and Ethnicity Symbolic interaction theorists look at two issues in relation to race and ethnicity.