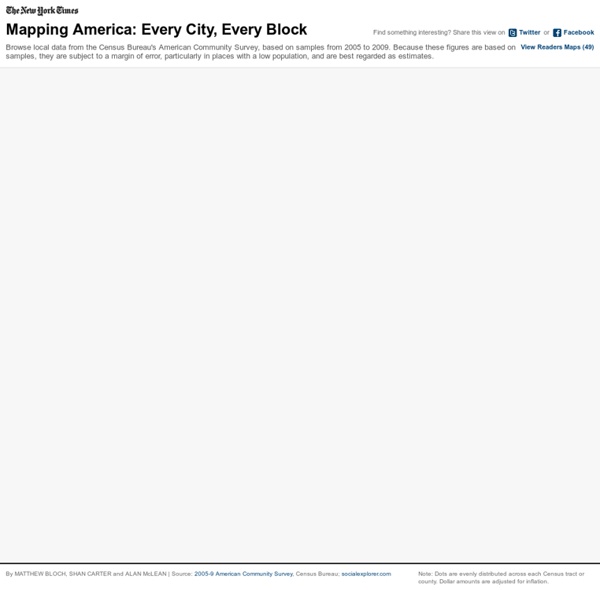 jQuery Geo docs Welcome! jQuery Geo is an open-source, geospatial mapping jQuery plugin from Applied Geographics developed with the intention of making spatial web mapping significantly simpler than it may initially seem. We would like to point out the term "open-source" to explictly state that Google, Bing, & Esri are generally free but not open. Please read the following sections for more information and examples, and thank you for considering us! If you have any questions feel free to ask the lead developer on Twitter. A Man Replaces His Lawn With a Giant Vegetable Garden and No Regrets During the summer, nothing is better than the smell of freshly cut grass. That is, unless, you have a giant vegetable garden growing in the place of your lawn. Instead of turf, this awesome homeowner, user locolukas on Reddit, opted for tomatoes. The results are absolutely epic.

Comparing US states with countries: US equivalents Which countries match the GDP and population of America's states? IT HAS long been true that California on its own would rank as one of the biggest economies of the world. These days, it would rank eighth, falling between Italy and Brazil on a nominal exchange-rate basis. Population Lines Print I recently produced a map entitled “Population Lines”, which shows population density by latitude. The aim was to achieve a simple and fresh perspective on these well-known data. I have labelled a few key cities for orientation purposes but I’ve left off most of the conventional cartographical adornments. I am really pleased with the end result not least because it resembles Joy Division’s iconic Unknown Pleasures album cover, which in itself is a great example of data visualisation as art. The data, from NASA SEDAC, have been mapped many times before and in many beautiful ways but none seem to me quite as compelling as the simple approach here of using only black and grey lines across the page.

Watch FRONTLINE Online Aired: 02/18/201453:41Rating: NR Thanks to social media, teens are able to directly interact with their culture -- celebrities, movies, brands -- in ways never before possible. But is that real empowerment? Or do marketers hold the upper hand? JavaScript APIs - HERE Developers HERE Maps API for JavaScript 3.0 See documentation The HERE Maps API for JavaScript 3.0 comes with a highly improved performance, enabled through leaner size and optimized API code, and is completely re-designed using the latest in browser and hardware technology. Additionally, it provides improved processing speed and faster load times while enabling application development across any desktop and mobile browser environment.

How it Works Watch this: Watch 3 actual turbines in action! SheerWind’s INVELOX Wind Delivery is simply a better way to harvest wind energy. Where Are The Jobs? Where Are The Jobs? Employment in America, 2010 Leaflet | Jobs: Map data from US Census LEHD, Imagery by Robert Manduca under CC BY 4.0, Background: Map tiles by Stamen Design, under CC BY 3.0. Data by OpenStreetMap, under ODbL. One Dot = One Job.

Discrimination and poor job prospects hit children of immigrants 2/7/2015 - The children of immigrants continue to face major difficulties integrating in OECD countries, especially in the European Union, where their poor educational outcomes leave many struggling to find work, according to a new OECD/EU report. Indicators of Immigrant Integration 2015: Settling In finds that youth with immigrant parents experience nearly 50% more unemployment in the European Union than those with native-born parents. The OECD/EU report presents the first detailed international comparison of the outcomes of immigrants and their children in all European Union and OECD countries.

Welcome to Alcatraz Welcome to AlcatrazHistory.com! Alcatraz History was designed to help introduce you to the rich history of Alcatraz during the penitentiary years and many of the inmates who called "the Rock" home. From the mid 1930's until the mid 1960's, Alcatraz was America 's premier maximum-security prison, the final stop for the nation's most incorrigible inmates. Today, Alcatraz is a place of contradictions, with a grim past and an enduring future as one of San Francisco 's most prominent landmarks and tourist attractions. AlcatrazHistory.com explores this history through brief narratives and photos, and serves as an excellent reference for researchers seeking a basic collection of information. If you find that your interest and research needs go beyond the basic, we offer an exceptional reference book for $26.99.

Voter Gravity Features - Voter Gravity Targeting, Contacting and Turning Out Voters Voter Gravity is a state-of-the-art mobile canvassing solution that can be accessed by smartphone, personal computer or tablet. Voter Gravity's simple and beautiful design produces targeted, insightful and immediate information about the audiences that mean most to your campaign. Battle-Tested Technology Launched in 2011, the Voter Gravity solution was developed by leading grassroots campaign experts who understand both the door-to-door and online battle for each vote. Part of Nature cartoon by Stuart McMillen - Recombinant Records This cartoon is heavily influenced by the books Natural Capitalism - Paul Hawken, Amory Lovins and Hunter Lovins (1999) and Mid-Course Correction - Ray Anderson (1998). It is also in the same vein as the flash animation "The Story of Stuff" by Annie Leonard, which I watched when I was about 90% of the way through the drawing process. Back to post / website.