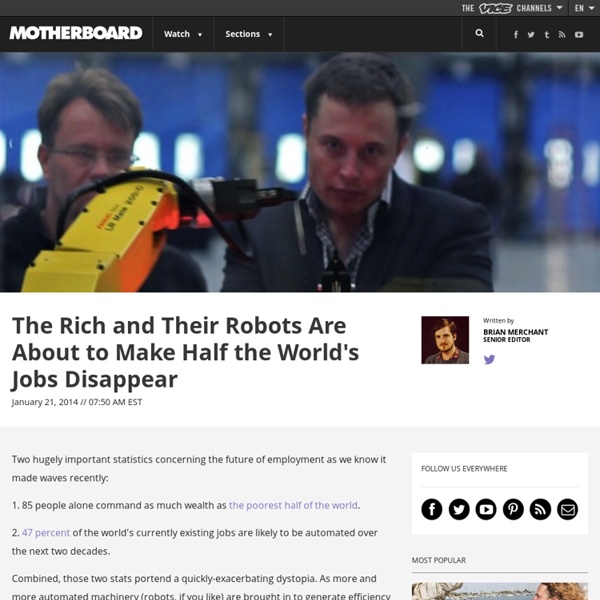 Two hugely important statistics concerning the future of employment as we know it made waves recently: 1. 85 people alone command as much wealth as the poorest half of the world. 2. 47 percent of the world's currently existing jobs are likely to be automated over the next two decades. Combined, those two stats portend a quickly-exacerbating dystopia. As more and more automated machinery (robots, if you like) are brought in to generate efficiency gains for companies, more and more jobs will be displaced, and more and more income will accumulate higher up the corporate ladder. The inequality gulf will widen as jobs grow permanently scarce—there are only so many service sector jobs to replace manufacturing ones as it is—and the latest wave of automation will hijack not just factory workers but accountants, telemarketers, and real estate agents. That's according to a 2013 Oxford study, which was highlighted in this week's Economist cover story. Related:  Future Work

How Technology Is Destroying Jobs Given his calm and reasoned academic demeanor, it is easy to miss just how provocative Erik Brynjolfsson’s contention really is. ­Brynjolfsson, a professor at the MIT Sloan School of Management, and his collaborator and coauthor Andrew McAfee have been arguing for the last year and a half that impressive advances in computer technology—from improved industrial robotics to automated translation services—are largely behind the sluggish employment growth of the last 10 to 15 years. Even more ominous for workers, the MIT academics foresee dismal prospects for many types of jobs as these powerful new technologies are increasingly adopted not only in manufacturing, clerical, and retail work but in professions such as law, financial services, education, and medicine. That robots, automation, and software can replace people might seem obvious to anyone who’s worked in automotive manufacturing or as a travel agent. But Brynjolfsson and McAfee’s claim is more troubling and controversial. Dr.

Google buys AI firm DeepMind to boost image search - tech - 27 January 2014 Google's shopping spree is far from over. Today the firm confirmed it has purchased DeepMind Technologies, a machine-learning company based in London, for $400 million. The acquisition of the AI firm follows Google's purchase of eight advanced robotics companies in December and the smart thermostat maker Nest Labs earlier this month. It is not hard to see why Google might be interested. DeepMind Technologies employs machine-learning engineers led by Demis Hassabis, a former commercial video-game coder turned artificial-intelligence expert and neuroscientist. The firm is aiming to build general purpose artificial-intelligence systems. Last month, DeepMind revealed that it had developed an AI algorithm that was able to learn how to play iconic early video games like Breakout and Pong. Although Google has not elaborated on why it has bought the firm – and on past form it probably won't – two US patents filed by DeepMind Technologies on 16 January offer some clues. More From New Scientist

The Long-Term Unemployment Crisis Is as Bad as Ever Advances in Artificial Intelligence Could Lead to Mass Unemployment Warn Experts Speaking on Radio 4’s Today programme, Dr Stuart Armstrong from the Future of Humanity Institute at the University of Oxford said that there was a risk that computers could take over human jobs “at a faster rate than new jobs could be generated.” “We have some studies looking at to which jobs are the most vulnerable and there are quite a lot of them in logistics, administration, insurance underwriting,” said Dr Armstrong. “Ultimately, huge swathe of jobs are potentially vulnerable to improved artificial intelligence.” Dr Murray Shanahan, a professor of cognitive robotics at Imperial College London, agreed that improvements in artificial intelligence were creating “short term issues that we all need to be talking about.” "It's very difficult to predict," said Dr Shanahan. Both academics did however praise Google for creating an ethics board to look at the “how to deploy artificial intelligence safely and reduce the risks” after its £400 million purchase of London-based start-up DeepMind.

A smart-object recognition algorithm that doesn’t need humans (Credit: BYU Photo) BYU engineer Dah-Jye Lee has created an algorithm that can accurately identify objects in images or video sequences — without human calibration. “In most cases, people are in charge of deciding what features to focus on and they then write the algorithm based off that,” said Lee, a professor of electrical and computer engineering. “With our algorithm, we give it a set of images and let the computer decide which features are important.” Humans need not apply Not only is Lee’s genetic algorithm able to set its own parameters, but it also doesn’t need to be reset each time a new object is to be recognized — it learns them on its own. Lee likens the idea to teaching a child the difference between dogs and cats. Comparison with other object-recognition algorithms In a study published in the December issue of academic journal Pattern Recognition, Lee and his students demonstrate both the independent ability and accuracy of their “ECO features” genetic algorithm.

World's Second-Richest Man Calls For Three-Day Workweek By Bryce Covert "World’s Second-Richest Man Calls For Three-Day Workweek" Carlos Slim, the world’s second-richest man CREDIT: AP/Dario Lopez-Mills Carlos Slim, the CEO of telecom company Telmex and the world’s second-richest man, told the audience at a business conference that we need a “radical overhaul” of the way we work that should include instituting a three-day workweek. “With three work days a week, we would have more time to relax; for quality of life,” he said. The tradeoffs would be longer hours — he suggested putting in as many as 11 hours a day — and working later into life, with a call to push the retirement age back to 70 or 75. He’s already started to test his theories out. Others have similarly experimented with reducing work hours in the hopes that it will make workers more productive. Workweeks are limited countrywide in other places, although no one comes close to Slim’s suggested three-day week.

Study indicates Robots could replace 80% of Jobs In a few decades, twenty or thirty years — or sooner – robots and their associated technology will be as ubiquitous as mobile phones are today, at least that is the prediction of Bill Gates; and we would be hard-pressed to ﬁnd a roboticist, automation expert or economist who could present a strong case against this. The Robotics Revolution promises a host of beneﬁts that are compelling (especially in health care) and imaginative, but it may also come at a significant price. The Pareto Principle of Prediction We find ourselves faced with an intractable paradox: On the one hand technology advances increase productivity and wellbeing, and on the other hand it often reinforces inequalities. In his study Elliot relies on advances in speech, reasoning capabilities and movement capabilities to illustrate how robots and technology can replace jobs. Elliot is not the first to claim that robotics and technology will have such a profound impact on employment or inequality. Thinking machines

Vertical farms sprouting all over the world - tech - 16 January 2014 Leader: "Fruit and veg, fresh from the skyscraper" URBAN warehouses, derelict buildings and high-rises are the last places you'd expect to find the seeds of a green revolution. But from Singapore to Scranton, Pennsylvania, "vertical farms" are promising a new, environmentally friendly way to feed the rapidly swelling populations of cities worldwide. In March, the world's largest vertical farm is set to open up shop in Scranton. Vertical farms aim to avoid the problems inherent in growing food crops in drought-and-disease-prone fields many hundreds of kilometres from the population centres in which they will be consumed. The plant racks in a vertical farm can be fed nutrients by water-conserving, soil-free hydroponic systems and lit by LEDs that mimic sunlight. The whole apparatus can be monitored from a farmer's smartphone (see "Farming from afar"), says GSF's R&D manager, Daniel Kluko. GSF's first farm was inspired by the long-term drought that has been afflicting many parts of the US.

A guaranteed income for every American would eliminate poverty — and it wouldn't destroy the economy Eliminating poverty seems like an impossibly utopian goal, but it's actually pretty easy: we can just give people enough money that they're above the poverty line. That idea, known as a basic income, has been around forever, but it's made a comeback in recent years. And it's a sign of how far it's come that opponents of the idea are beginning to feel the need to make arguments against it. Not so fast — the experiments raise valid worries, but they hardly herald doom, and still suggest that a negative income tax could eliminate poverty at a manageable cost. The 1970s experiments President Nixon and Daniel Patrick Moynihan, who designed his negative income tax plan. A negative income tax isn't precisely the same thing as a basic income, but it's related: after giving everyone a cash grant, an NIT rapidly taxes it away, such that the vast majority of taxpayers get no money back at all. The problems with concluding too much 1. This is the big one. 2. So what happened, then? 3. 4. 5.

Robotic-Farming Grows With the Ladybird My following article below was originally published by SERIOUS WONDER: Robots are going to steal your job, but that’s okay, because they’ll be liberating us away from boring, strenuous and monotonous labor and give us far more time in doing what we truly want to do. Agriculture will not be an exception, and is in fact moving fast in becoming a model of what the entire workforce will eventually transform into. In today’s age, we’ll be witnessing the coupling of the agricultural revolution with the industrial revolution – robotic farming. From drones to autonomous tractors, robotic farming is here to stay and (dare I say it?) Serious Wonder was able to briefly speak with Professor Salah Sukkarieh, the lead researcher in project Ladybird, to which he stated: “Ladybird is a completely new approach to agriculture robotics. The Ladybird is an omnidirectional, self-driving vehicle with three goals in mind: collect data, analyze data, and harvest. Like this: Like Loading...