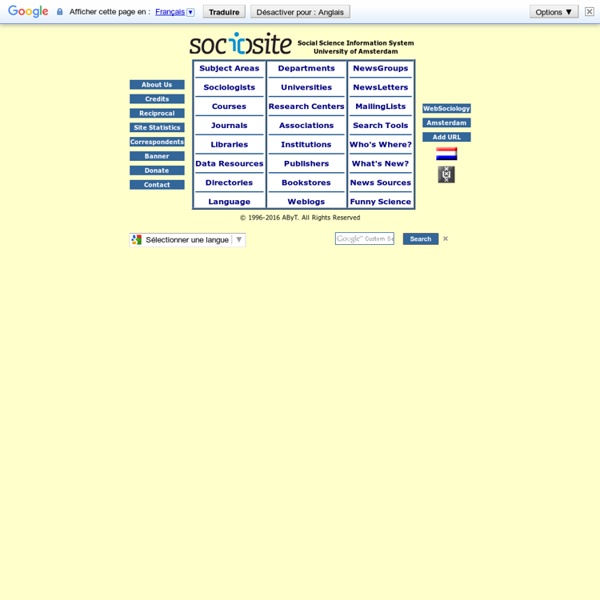 The Encyclopedia of Psychology Submit to Add Your Site If you have a resource you feel should be listed, please use this form to have it approved. We individually review each submission, so be sure to fill in every field to expedite the process. Should your resource pass muster, we will notify you of our plans to post it. Managing Submissions To make changes to a listed resource, please email us at contact@psychology.org with URL of the resource, the issue, the fix and your name. Robert Wonser's Sociology Page Welcome to the homepage of Robert Wonser, adjunct professor of Sociology at College of the Canyons, Moorpark College and Pierce College. This site contains all of the resources for my sociology courses at all three schools. "Sociology's misfortune is that it discovers the arbitrary and the contingent where we like to see necessity, or nature ... and that it discovers necessity, social constraints, where we would like to see choice and free will." - Pierre Bourdieu

"Theory" in sociology What is a sociological theory? And how does it relate to the challenge of providing explanations of social facts? In the natural sciences the answer to this question is fairly clear. A theory is a hypothesis about one or more entities or processes and a specification of their operations and interactions. Science overturns view of humans as naturally ‘nasty’ By Agence France-PresseMonday, February 20, 2012 20:50 EDT VANCOUVER, Canada — Biological research increasingly debunks the view of humanity as competitive, aggressive and brutish, a leading specialist in primate behavior told a major science conference. “Humans have a lot of pro-social tendencies,” Frans de Waal, a biologist at Emory University in Atlanta, told the annual meeting of the American Association for the Advancement of Science. New research on higher animals from primates and elephants to mice shows there is a biological basis for behavior such as cooperation, said de Waal, author of “The Age of Empathy: Nature’s Lessons for a Kinder Society.” Until just 12 years ago, the common view among scientists was that humans were “nasty” at the core but had developed a veneer of morality — albeit a thin one, de Waal told scientists and journalists from some 50 countries.

Anthropological Index Online The Anthropological Index Online (AIO) is published by the Royal Anthropological Institute (RAI) in cooperation with Anthropology Library and Research Centre at the British Museum. It is an index to articles in journals taken by the Library and to films held at the Royal Anthropological Institute. The Library, which incorporates the former RAI library, holds some 4,000 periodical titles (1,500 current) covering all branches and areas of anthropology. The Collection of Computer Science Bibliographies About the Collection This is a collection of bibliographies of scientific literature in computer science from various sources, covering most aspects of computer science. The bibliographies are updated weekly from their original locations such that you'll always find the most recent versions here. The collection currently contains more than 3 millions of references (mostly to journal articles, conference papers and technical reports), clustered in about 1500 bibliographies, and consists of more than 2.3 GBytes (530MB gzipped) of BibTeX entries. More than 600 000 references contain crossreferences to citing or cited publications. More than 1 million of references contain URLs to an online version of the paper.

Who Rules America? Power, Politics, & Social Change by G. William Domhoff Welcome to WhoRulesAmerica.net, a site about how power is distributed and wielded in the United States. It both builds upon and greatly supplements the book Who Rules America?, now in its 7th edition. Why Are People Dying to Bring You Dinner? The Shocking Facts About Our Food System March 30, 2012 | Like this article? Join our email list: Stay up to date with the latest headlines via email. Cesar Chavez, the champion of farmworkers' rights who gets his annual day of state recognition this Saturday, must be rolling in his grave.

Trifunctional hypothesis This part of a 12th-century Swedish tapestry has been interpreted to show, from left to right, the one-eyed Odin, the hammer-wielding Thor and Freyr holding up wheat. Terje Leiren believes this grouping corresponds closely to the trifunctional division. The trifunctional hypothesis of prehistoric Proto-Indo-European society postulates a tripartite ideology ("idéologie tripartite") reflected in the existence of three classes or castes—priests, warriors, and commoners (farmers or tradesmen)—corresponding to the three functions of the sacral, the martial and the economic, respectively. This thesis is especially associated with the French mythographer Georges Dumézil[1] who proposed it in 1929 in the book Flamen-Brahman,[2] and later in Mitra-Varuna.[3] Three-way division[edit] According to Dumézil, Proto-Indo-European society comprised three main groups corresponding to three distinct functions: