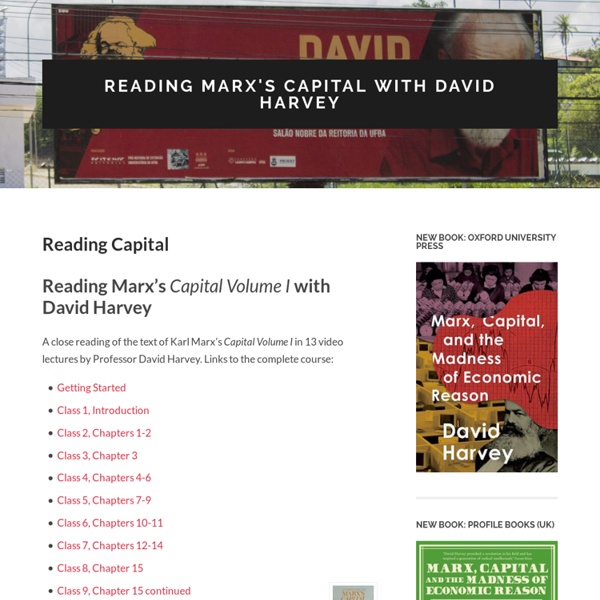 Avineri: Hegel's Theory of the Modern State, 5: Modern life and social reality Shlomo Avineri (1972) Source: Hegel's Theory of the Modern State, Shlomo Avineri, 1972. 5: Modern life and social realityLabour, Alienation & the Power of the Market In the System der Sittlichkeit and the two versions of the Realphilosophie Hegel introduces for the first time his theory of what he would later call 'objective spirit', though the Realphilosophie contains also much else. [13] Both sets of texts remained unpublished in Hegel's own lifetime. The System der Sittlichkeit, composed around 1802-3, was published in its entirety for the first time by Lasson in 1913, though an earlier incomplete version was published by Mollat in 1893. The two versions of lectures known as Realphilosophie I and II, delivered by Hegel at Jena University in 1803-4 and 1805-6 respectively, were published by Hoffmeister for the first time in the early 1930s.

Marxism in the 21st Century: Alternative to Neoliberal Capitalism and Imperialism The Marxist, XXVII 4, October–December 2011 Prakash Karat Marxism in the 21st Century: Alternative to Neoliberal Capitalism Challenging Evolution What if our current view of human history which Darwin's theory of evolution propagated is fundamentally flawed? As we head into a time in which we are faced with more technology than wisdom to know what to do with it - where on the horizon is bioenhancement, extended life span, machine-mind interfaces and much much more, where we are starting to run into the idea of "accelarated evolution", I believe it important that we take a look at our current view of human evolution and its history. At the moment, the overwhelming majority of scientists (but not all), and especially laymen, follow the view of evolution first put forth by Darwin and furthered by many scientists and discoveries since. It is the preeminent theory of human origins, and has had many effects on our current world model. You can see the effects of Evolution everywhere. Just today I saw an ad in which a human regresses all the way into a reptile.

The Naxalite Rebellion: Social Inequality and Violence in India By Peter Brown While it is seldom mentioned in the Western media, the Naxalite rebellion in India represents a significant threat to the establishment in its effectiveness and its level of popular support. According to some reports, the Naxals control up to one-third of India’s territory at any given time, and in some places they have established alternate governments.

Law of Value- the series Though most use the term “Labor Theory of Value” Marx never did. Instead he referred to the “Law of Value”. Either way, that is the subject of this video series, which you can find linked below. 4th August 1914: The Great Betrayal and Collapse of the Second International This year marks not only 100 years since the outbreak of the First World War, but it also marks the centenary of another debacle: the collapse of the Second International, the international body that brought under its banner all the mass workers’ parties. It was not The War That Will End War, as the title of H. G. Wells’ 1914 book optimistically declared, but the starting point of a deepening world crisis. The “Great War” would last more than four years and result in the death of ten million people, with tens of millions more maimed and crippled. The imperialist rivalries that caused the War would not be eliminated or diminished, but would later emerge with a vengeance.

M-L-M Mayhem!: The Hard Sell of Revolution in the First World Due to the default opportunism that festers at the centres of capitalism, organizing in the so-called first world possesses particular challenges that exist as stumbling blocks and/or anti-organizational principles that even the most radical marxist in theory might end up incorporating in their practice. Whereas the challenges of organizing in the peripheries are indeed monumental––since revolutionaries in these contexts experience the entire brunt of imperialist super-exploitation––the fact that, as Amin once pointed out, the contradictions are clearer in these contexts due to the very fact of super-exploitation means that revolutionary consciousness also possesses a clarity. A comrade of mine who was politicized in a third world context lamented the fact that his children were not interested in communism, despite his best efforts, whereas he grew up in a context where his entire family was politicized as communists due to their experience.

M-L-M Mayhem!: Reflections on Robert Biel's *The Entropy of Capitalism* At the conclusion of The Communist Necessity I wrote: "the window in which we can make revolution is closing as the world approaches the armageddon promised by the logic of capital." The intention of this claim was to point out the necessity of organizing in the face of capitalism's depletion of liveable existence, arguing that we needed to get our shit together because, due to capitalism's internal logic, it might be too late to continue waiting until the current mode of production has played its course. At that time I had not read Robert Biel's The Entropy of Capitalism––though I had helped edit the second edition of his earlier manuscript, Eurocentrism and the Communist Movement––and he was nice enough to write a blurb for the back of The Communist Necessity… I really wish I had read his most recent book, however, considering that The Entropy of Capitalism dove-tailed with the conclusion of my book. It's not just the source material. But I digress. Niche?

Class Struggles in the USSR: 1917-1923 In book form the first volume of Charles Bettelheim's Class Struggles in the USSR: 1917-1923 exceeds 500 pages in length. An electronic version of the text prepared for this site would, as a single file, exceed 1.5MB! Given the very large size of this text, I have once again departed from my normal practice of making a single complete file available, and have instead divided the text into five easily managable sections and set off the author's bibliograpy and index in a separate sixth section. Social Democracy and Fascism as Cousins-German Sheri Berman’s book on the past and future of European social democracy makes (at least) two big contributions. First, it takes up Karl Polanyi’s claims about the origins of socialism and fascism and makes something new of them. Berman is explicitly writing in a Polanyian tradition, but she isn’t a disciple or an epigone of Polanyi. Like the social democrats who are the heroes of this book, she takes a classic set of arguments and interrogates and updates them, making claims about what works and what doesn’t, what’s relevant to our contemporary situation, and what isn’t. Second, in so doing she decisively demonstrates the importance of ideas to politics. Her story is one where ideas have dramatic consequences for history.

What Is Marxism? Understanding Marxist economics Capitalism's big con: Understanding Marxist economics by Peter Watson THE PICTURE is the same wherever you look: part-time, low-paid jobs and DIY stores where there were once factories, people scrambling to keep their heads above water. Anarchism: reading guide Libcom.org's reading guide on anarchism, anarchist theorists and their development through history. Recommended introductions An Anarchist FAQ - Absolutely massive archive of frequently asked questions, with clear and highly detailed responses drawing on the theory and practice of the anarchist tradition. What is anarchism?