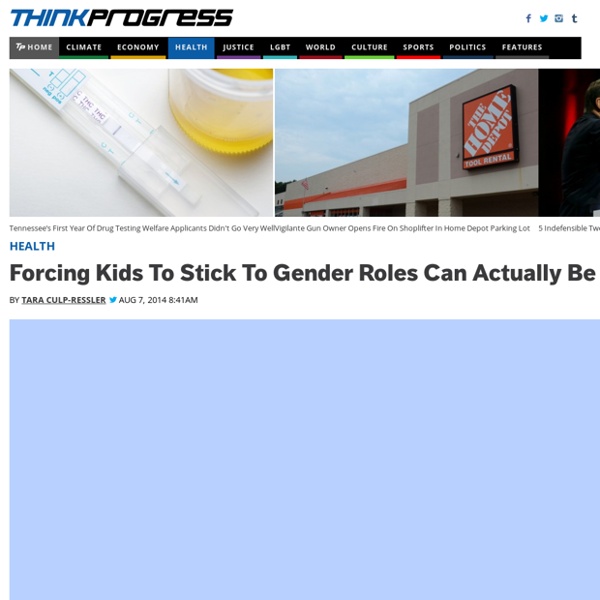 Raising children in societies that adhere to rigid gender roles, with fixed ideas about what should be considered “masculine” and “feminine,” can actually be detrimental to their physical and mental health, according to a study that observed 14-year-olds’ interactions over a three month period. “Usually we think of gender as natural and biological, but it’s not… We actually construct it in ways that have problematic and largely unacknowledged health risks,” lead researcher Maria do Mar Pereira, the deputy director for the University of Warwick’s Centre for the Study of Women and Gender, explained in an interview with ThinkProgress. Pereira drew her conclusions after being embedded in a class of teenagers in Lisbon, Portugal. Pereira observed both boys and girls regulating their behavior in potentially harmful ways in order to adhere to gender norms. “All of the girls were within very healthy weights, but they were all restricting their intake of food in some way.

Skirting Ochobo: Big Business Finds a Way around Local Customs Ten women marched in defiance of the stigma against women smoking cigarettes as part of the New York Easter Day Parade in 1929. The interesting thing was, however, it was all a sham. The tobacco industry had set the whole thing up with the help of public relations mastermind, Edward Bernays. American Tobacco Company President George Hill knew cigarette sales would skyrocket if more U.S. women smoked, a behavior reserved for men in the 1920s that had closed off the female market. Within one year of Bernay’s stint, women were smoking.

Feminism benefits men too – and it’s vital we bring our boys up to be more than victims of gender On 24 May at Methodist Central Hall, Westminster, a short distance from where he once governed, Tony Blair resurfaced for a public discussion. Having arrived on an overnight flight, he looked drawn and puffy-eyed but soon warmed to his theme: a robust defence of liberal globalisation. He admitted, however, to bafflement at recent events in the world. "I thought I was pretty good at politics. But I look at politics today and I’m not sure I understand it." The 5 Biases Pushing Women Out of STEM By now, we’ve all heard about the low numbers of American women in science, technology, engineering, and math (STEM). Some argue it’s a pipeline issue – that if we can interest more young girls in STEM subjects, the issue will resolve itself over time. But that’s not convincing. After all, the percentage of women in computer science has actually decreased since 1991.

Diversity/Multi Cultural with Language-Literacy Updated January 2013 Some languages have more than one word for what English speakers think of as a single entity. Since ice is so important in their lives, the Inuit people reportedly differentiate among the various kinds, from slush ice to black ice. Have children choose something important to them – stickers, ice cream or ???– and MAKE-UP WORDS for different kinds. France Just Passed A Sweeping Gender Equality Law To Make It Easier To Get An... by Tara Culp-Ressler Posted on Share this: Why Today presenter Karl Stefanovic wore the same suit for a year Karl Stefanovic in his Burberry knock-off with co-host Lisa Wilkinson. Angered by the sexism he saw being heaped upon his female colleagues – and attempts to downplay it – Karl Stefanovic decided to conduct an experiment. He wore the same blue suit on air, two days in a row.

Why Teach Multicultural Literature? iStockphoto.com I have taught literature at the college level for almost a decade and at as many as six different campuses. These have mainly been classes that were focused on non-western writing. ACT for Youth - Adolescence - Ethnic and Racial Identity Development Identity development, the growth of a strong and stable sense of self across a range of identity dimensions, is central to adolescent development [1]. While we have many types of identities (religious, cultural, and national, to name a few), ethnic and racial identities are an important part of how we see ourselves and how others see us. Ethnic and racial identities, of course, are not adopted solely by minority populations. Everyone develops a sense of ethnic and racial identity.

It's Simple, Invest In A Girl, Invest In The World This infographic, courtesy of UNICEF, Every Woman Every Child and UN Global Education First Initiative, illustrates how investing in women and girls, is an investment in the world. A girl multiplies the impact of an investment made in her future by extending benefits to the world around her. When girls and women earn income, they are likely to reinvest 90% of it into their families. In a recent letter to The New York Times entitled, Help Boys, but Don’t Shortchange Girls, Gloria Steinem, Pamela Shifman and Girls Inc., outline the lack of funding for girls by foundations, “Foundation funding directed to girls and women remains less than 7.5 percent of all foundation funding; funding dedicated to girls and women of color has, to our knowledge, never been counted.” It’s simple, investing in women and girls is the right and smart thing to do! Other Stories You Might Like

Having a working mother works for daughters Negative perceptions around women who combine paid work with parenthood have been comprehensively demolished in a major study by Harvard University, which shows the daughters of working mothers enjoy better careers, higher pay and more equal relationships than those raised by stay-at-home mothers. Using data from 24 countries including the UK and US, the Harvard study says that while working mothers “often internalise social messages of impending doom for their children”, the reality is that their sons and daughters appear to thrive, with daughters benefiting most from the positive role model of a mother with a career. Harvard Business School professor Kathleen McGinn, lead author of the study, noted that the effect on daughters’ careers of mothers working was particularly marked in the UK and US, where public attitudes to career equality could be more of a barrier than in some European countries such as Finland and Denmark.

Classroom Strategies for Multicultural Literacy August 20, 2015 A lack of early reading skills can result in poor outcomes for students in the classroom and beyond. Students from certain communities tend to have lower literacy levels, which can reduce both academic and career potential. Female Writer Faces Twitter Backlash After Asking About Tampons Trending on Related Blogs How I Became Thousands of Nerds' Worst Enemy by Tweeting a Photo 919 people reading on Gawker Let's Stop Trying To Teach Students Critical Thinking 490 people reading on io9 DJ Stephanie Hirst returns to air after gender change - BBC News A DJ who underwent gender reassignment is returning to mainstream radio after a year-long break. Stephanie Hirst, formerly known as Simon, hosted the commercial Top 40 show nationally between 2003 and 2006. The Barnsley-based DJ left Capital FM Yorkshire and television channel Gold last June after confirming her gender change. She will join BBC Radio Manchester for a weekly show, saying she "wanted to ensure that my return is gentle". Numerous sources told BBC News last year that Ms Hirst was suspended by bosses at Global Radio when she disclosed that she wanted to be a woman. The company said at the time: "Hirsty made the decision to take time out to focus on the process he was going through.