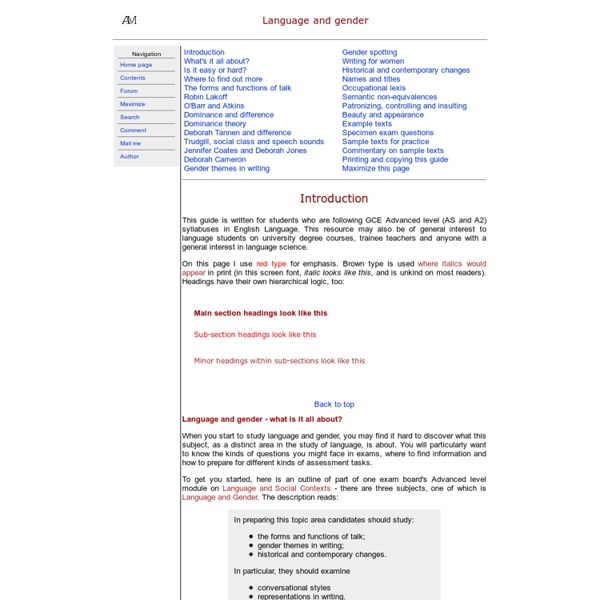 Introduction This guide is written for students who are following GCE Advanced level (AS and A2) syllabuses in English Language. This resource may also be of general interest to language students on university degree courses, trainee teachers and anyone with a general interest in language science. On this page I use red type for emphasis. Brown type is used where italics would appear in print (in this screen font, italic looks like this, and is unkind on most readers). Headings have their own hierarchical logic, too: Back to top Language and gender - what is it all about? When you start to study language and gender, you may find it hard to discover what this subject, as a distinct area in the study of language, is about. To get you started, here is an outline of part of one exam board's Advanced level module on Language and Social Contexts - there are three subjects, one of which is Language and Gender. How language reveals, embodies and sustains attitudes to gender. Is it easy or hard?

Representing gender in children's reading materials would a boy have been shown with flowers in the 1970s? Are girls and boys portrayed differently in children’s reading materials today than in the past? During the 1970s and 80s, studies of children’s reading materials found that males not only featured more than females but also they tended to take the lead roles and were more active than their female counterparts, who were often restricted to traditional stereotyped roles. Many of these earlier studies of gender in children’s reading material analysed the texts based on their content, which meant that researchers made their own judgements about what was sexist and what was not. Feminism "damages" our mother tongue (Gelernter) How can I teach my students to write decently when the English language has become a wholly-owned subsidiary of the Academic-Industrial Complex? Our language used to belong to all its speakers and readers and writers. But in the 1970s and '80s, arrogant ideologues began recasting English into heavy artillery to defend the borders of the New Feminist state. In consequence we have all got used to sentences where puffed-up words like "chairperson" and "humankind" strut and preen, where he-or-she's keep bashing into surrounding phrases like bumper cars and related deformities blossom like blisters; they are all markers of an epoch-making victory of propaganda over common sense. We have allowed ideologues to pocket a priceless property and walk away with it. Today, as college students and full-fledged young English teachers emerge from the feminist incubator in which they have spent their whole lives, this victory of brainless ideology is on the brink of becoming institutionalized.

Language and Woman's Place: Text and Commentaries - Robin Tolmach Lakoff, Mar... The 1975 publication of Robin Tolmach Lakoff's Language and Woman's Place, is widely recognized as having inaugurated feminist research on the relationship between language and gender, touching off a remarkable response among language scholars, feminists, and general readers. For the past thirty years, scholars of language and gender have been debating and developing Lakoff's initial observations. Arguing that language is fundamental to gender inequality, Lakoff pointed to two areas in which inequalities can be found: Language used about women, such as the asymmetries between seemingly parallel terms like master and mistress, and language used by women, which places women in a double bind between being appropriately feminine and being fully human. Lakoff's central argument that "women's language" expresses powerlessness triggered a controversy that continues to this day.

From Lakoff to Today – The Gender Factor in Spoken Interaction Robin Lakoff’s Predictions: Robin Lakoff, in 1975, published an influential account of women’s language. This was the book Language and Woman’s Place. In a related article, Woman’s Language, she published a set of basic assumptions about what marks out the language of women. Among these are claims that women: 1. The genius of Jodie Foster's speech Reading this on mobile? Click here to view the video It's a considerable thing to deliver a speech that is at once artfully put together and emotionally affecting. At the Golden Globes – where in accepting the Cecil B DeMille award for lifetime achievement, she made the first public acknowledgement of her sexuality – Jodie Foster managed both. What's striking is not what the speech gave away, but the control and delicacy with which it delivered its payload. The art of rhetoric is, at root, about the relationship between a speaker and an audience.

Feminism defined International Women's Day rally in Dhaka, Bangladesh, organized by the National Women Workers Trade Union Centre on 8 March 2005. Feminism is a collection of movements and ideologies aimed at defining, establishing, and defending equal political, economic, cultural, and social rights for women.[1][2] This includes seeking to establish equal opportunities for women in education and employment. A feminist advocates or supports the rights and equality of women.[3] Feminist theory, which emerged from feminist movements, aims to understand the nature of gender inequality by examining women's social roles and lived experience; it has developed theories in a variety of disciplines in order to respond to issues such as the social construction of sex and gender.[4][5] Some of the earlier forms of feminism have been criticized for taking into account only white, middle-class, educated perspectives. This led to the creation of ethnically specific or multiculturalist forms of feminism.[6] History

Gender Styles in Computer Meditated Communication A Theory of "Powerless Language" An excerpt from "Men and Women in Conversation: An Analysis of Gender Styles in Language" by SUSAN GITHENS Lafayette College May 1991 Language, Gender and Feminism: Theory, Methodology and Practice - Sara Mills,... Language, Gender and Feminism presents students and researchers with key contemporary theoretical perspectives, methodologies and analytical frameworks in the field of feminist linguistic analysis. Mills and Mullany cover a wide range of contemporary feminist theories and emphasise the importance of an interdisciplinary approach. Topics covered include: power, language and sexuality, sexism and an exploration of the difference between second and third wave feminist analysis.

Level Up: English Language - Language and gender Language and Gender There are two different types of Language and Gender questions you could be asked about: representations of gender and gender in action. For instance, magazine articles, adverts and books all include representations of gender (usually stereotypes) and not what males and females are really like. It's the perception of a gender difference, not a real gender difference. Transcripts, however, will show you how gender differences affect language (unless they are faked, be careful!) A distinction you must understand: Men and women: are we really worlds apart? - Features Do women and men talk differently? And, if they do, why? Kitty Sadler explores the theories Kitty Sadler, 13 March 2011

Gender neutrality in English Gender-neutral language is a form of linguistic prescriptivism that aims to minimize assumptions about the gender or biological sex of people referred to in speech or writing. This article discusses aspects of gender neutrality as they relate to the English language. Rationale[edit] Proponents of gender-neutral language argue that the use of gender-specific language often implies male superiority or reflects an unequal state of society.[1][2] According to The Handbook of English Linguistics, generic masculine pronouns and gender-specific job titles are instances "where English linguistic convention has historically treated men as prototypical of the human species.

Sexist language: it's every man for him or herself As long ago as 1911, the American writer Ambrose Bierce, in his satirical The Devil's Dictionary, objected to Miss – "a title with which we brand unmarried women to indicate that they are in the market" – and proposed that for consistency there should be a title for the unmarried man: "I venture to suggest Mush, abbreviate to Mh." We may have to wait a while longer for "Mh", but Ms, which I recall being greeted with ridicule when it started to catch on in the 1960s and 70s, is now well established. The assumption that women's marital status, but not men's, should be included in the formal way they are identified is rightly becoming a thing of the past. Some men just do not have the grace to admit they are beaten. The fact that the deputy leader of one of our main political parties is female and has the word "man" in her name is an endless source of amusement to the kind of person who thinks it witty to call her "Harriet Harperson".