Even in Entrepreneurship, Women Face Gender Constraints. For women who face disadvantages in climbing the corporate ladder, entrepreneurship is a potential way for them to meet their potential. 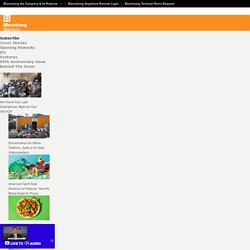 But even then, women still face gender-related constraints when starting a business, according to a study by the Asia-Pacific Economic Cooperation. Laws that restrict women's access to financing is one key barrier for female owners of small and medium enterprises, according to the study. “Restrictive inheritance laws are a good example of this type of barrier.

If we're serious about gender equality, we need more women in leadership roles. Women still believe there are greater benefits to being male, according to new research, despite significant improvements in gender equality. 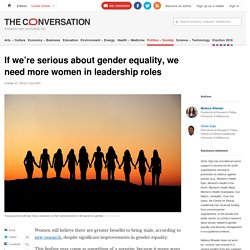 This finding may come as something of a surprise, because it many ways women are doing better than ever. Female labour force participation in Australia has been steadily increasing over the last sixty years. Women are finishing university degrees at an unprecedented rate, and female representation in tertiary education programs in fields that were previously male-dominated, such as life sciences, business and law, have improved. In the political arena, Australia elected its first female prime minister. 'We live in constant fear': Argentina's women on marching against violence. ‘The violence that women suffer is the result of an underlying ideology that is common to all’ I marched from the Obelisk to Plaza de Mayo because I don’t remember a time when I wasn’t afraid of the harassment that comes with being a woman. 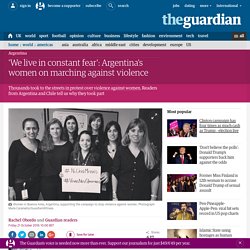 I am joined in this feeling by so many others. And we are finally taking a stance. I wanted to help make a point together with all my fellow Argentines that misogyny is a social disease and that we are ready to fight to erradicate it. Royaume-Uni. Écarts de salaire hommes-femmes : bientôt la fin du déni ? Benefits of women to business and the economy are clear, but distant. Research overwhelmingly suggests that having more women in the C-suite improves profitability. 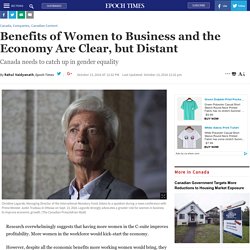 More women in the workforce would kick-start the economy. However, despite all the economic benefits more working women would bring, they remain very poorly represented in the workforce, let alone at the top levels of companies. Inégalités salariales : à quelle heure les femmes arrêtent-elles d'être payées ? How ‘neurosexism’ is holding back gender equality – and science itself. People looking for proof that men and women learn, speak, solve problems or read maps differently often think brain scanners are the ultimate answer.

And it’s easy to see why. Whether you want to advocate separate schools for girls and boys or sex-segregated training of our armed forces, you can be sure to find brightly colour-coded maps highlighting differences between males and females in various brain areas – potentially backing up your argument. Investors must speak up about corporate gender inequality. Fred Pinto is chief executive officer of OceanRock Investments. 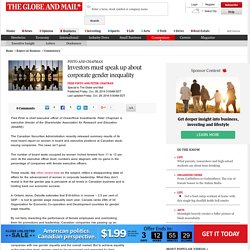 Peter Chapman is executive director of the Shareholder Association for Research and Education (SHARE). The Canadian Securities Administration recently released summary results of its most recent report on women in board and executive positions at Canadian stock-issuing companies. The news isn’t good. The number of board seats occupied by women inched forward from 11 to 12 per cent. At the executive officer level, numbers were stagnant, with no gains in the percentage of companies with female executive officers. La femme va-t-elle enfin trouver sa place dans l’économie africaine ? Malgré des discriminations persistantes, le poids économique des femmes en Afrique est de plus en plus important. 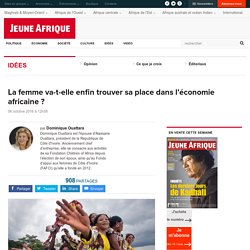 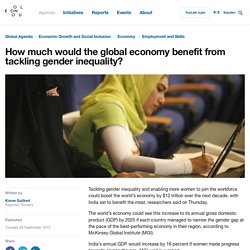 The world’s economy could see this increase to its annual gross domestic product (GDP) by 2025 if each country managed to narrow the gender gap at the pace of the best-performing economy in their region, according to McKinsey Global Institute (MGI). India’s annual GDP would increase by 16 percent if women made progress towards closing the gap, MGI said in a report. Workplace equality could be achieved sooner if countries improve women’s access to education, financial services and digital technology, offer greater legal protection and reduce time spent doing unpaid work, such as childcare and cleaning, the report said. Yet this is unlikely to happen without significant social change, according to the report’s authors. To keep up with the Agenda subscribe to our weekly newsletter. Share. The G20 and Gender Equality. Le droit à l’éducation pour les filles et les femmes, un enjeu de taille. Today’s challenges for girls’ education. Educating a girl is one of the best investments her family, community, and country can make. 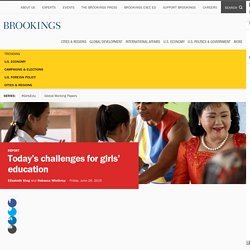 We know that a good quality education can be life-changing for girls, boys, young women, and men, helping them develop to their full potential and putting them on a path for success in their life. More women in startups means more female CEOs down the line. It was widely reported last year that in Australia there were more men named Peter leading ASX 200 companies than there were women of any name. 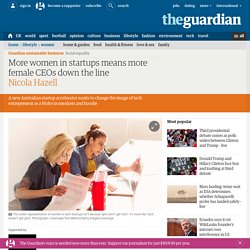 Unfortunately this is also true at the other end of the pipeline, in the startup space – where the high-impact companies of the future are being created. Women in work: The Norwegian experience - OECD Observer. Any country’s main asset is its workforce, and Norway, with its oil wealth, is no exception. Sustainable policies for low unemployment and high participation rates for women, men and young people are predominant and the burden sharing of the cost of the welfare state is carried on the back of the labour force.

In the last 50 years, there has been a tremendous change in women’s participation in paid work in most OECD countries. Global Development Professionals Network. During the first US presidential debate, observers noted that Donald Trump interrupted Hilary Clinton 51 times, while Clinton talked over her opponent 17 times. For many commentators, the gender dynamics within these televised debates have been impossible to ignore. They have magnified the gendered nature of political debate globally. In countries around the world, “masculine” qualities of strength and aggression are valued.