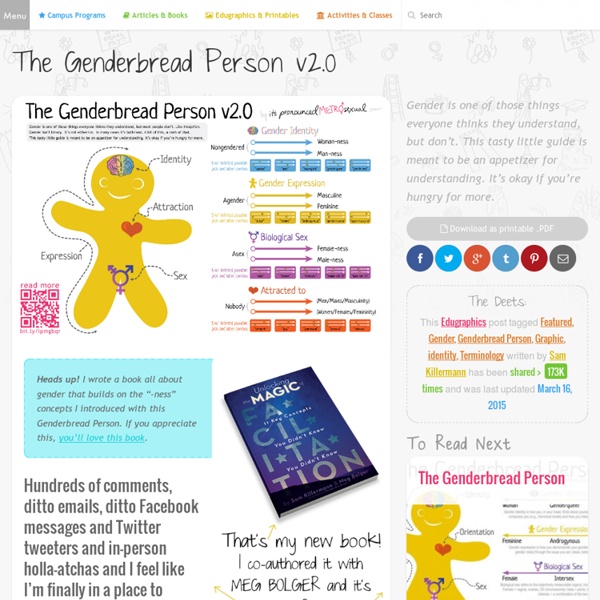 Hundreds of comments, ditto emails, ditto Facebook messages and Twitter tweeters and in-person holla-atchas and I feel like I’m finally in a place to release this. I give you the new and improved Genderbread Person! (click for larger size) Depending on what you folks have to say after checking this out and reading the rationale below, I’ll be updating the Breaking through the Binary article and uploading a printer-friendly version of the new graphic. But first, let’s rationalize. Let’s break this thing down. I would really like to see this model replace all instances of the old one. More accurate Men are from Mars and women are from Venus is a funny expression (and scientifically dubious), but it actually nails down the strength of this model. Let’s take “Gender Identity” for our example. This model allows one to define their gender in a way that accounts for varying intensities of -ness. More inclusive Let’s take “Attraction” for our example. Just as adorable This was a tough nut to crack. Related:  pastoral care • gender fluidity

Stress Stress is a process, not a diagnosis. We experience stress when there is an imbalance between the demands being made on us and our resources to cope with those demands. The level and extent of stress a person may feel depends a great deal on their attitude to a particular situation. An event that may be extremely stressful for one person can be a mere hiccup in another person’s life. You may feel under pressure to do something and fear you may fail. The more important the outcome, the more stressed you feel. Stress is not always a bad thing. Stress may also contribute to physical illness such as cardiovascular disease. Effects of stress Stress affects us in many ways, including: Emotionally – anxiety, depression, tension, anger The way we think – poor concentration, forgetfulness, indecisiveness, apathy, hopelessness Behaviourally – increased drinking and smoking, insomnia, accident proneness, weight problems, obsessive-compulsive behaviour, nervousness, gambling. Your response to stress

Genderpalooza! A Sex & Gender Primer You probably already know what sex is (and no, not that kind of sex): the classification of a person (or plant or animal) based on whether their anatomy and chromosomes are what we identify or classify as male or female, from a physiological perspective. It’s typically assumed that sex and gender are the same thing. What the heck is gender? identity , roles and status based on ideas about sex and what it means to different people and groups. binary : as being only one thing or the other, without any overlap or grey area in between. masculine and what feminine , man or woman, or other kinds of gender altogether either outside those two terms, mixing them or expanding those ideas and feelings. Making sense of gender – and the roles and status based on gender -- can sure get complicated, especially because of what a big deal gender is in our world, how it effects everyone’s relationships and personal identity, and how varied – yet pervasive – ideas about gender can be. genitals and for women, . sexual

The Conversation, Promoting Sexual Wellness | Campfire Introduction Have you had “the conversation” (cue appropriate nudge and wink)? Whether you’re a parent, grandparent or young person, talking about sex often makes us uncomfortable. In this special collection of short films, we’ve partnered with a number of organisations to make the conversation easier for everyone. When so much of the discussion around human sexual relations today gets lost in politics and innuendo, we hope this focus on sexual wellness provides a fresh opportunity to promote the values of honesty, openness and respect. Any conversation about sex can be easier to start by looking at the broader issues at stake. Despite sex education currently being taught in the majority of Australian secondary schools, just 59 per cent of teens reported using condoms when they last had sex (according to the La Trobe University National Survey of Secondary Students and Sexual Health 2013). NO TIME? Two short films available at Campfire from the Ask Grandad resource kit:

Non-binary gender — Sexpression:UK What does it mean to be non-binary? Although people tend to think of gender as a strict binary (the idea that people are either men or women), in reality people are more complicated than that - and that's where non-binary people come in! A non-binary person is someone who identifies as something other than entirely a man or entirely a woman. Is being non-binary the same as being transgender? Well, yes and no. However, like any group of people, non-binary folks are a diverse bunch - not everyone experiences dysphoria to the same degree, if at all, and the amount of dysphoria a person feels doesn't necessarily determine the changes they make. Someone I know just told me they're non-binary - what can I do to support them? First of all, accept that they're telling the truth. To Summarise: Non-binary people identify as something other than entirely a man or entirely a womanSome of us are transgender and some of us aren't - and that's okay! Links: Nonbinary.org The Genderbread Person

We Promise, These Aren't Two Different People, Just Years Of Drug Use (19 pics) Posted Feb 13, by BJ Rudd He looks really tired now Change occurs fast You don't age well You struggle to make regular facial expressions Your skin suffers You lose a lot of weight Disheveled is their new look The weight loss make them unrecognizable Smiles start to fade Loss of color and hair Motor skills become difficult to control Ages your twice as fast You give up your ability to age well Heavy drug use is never positive in your life You wonder if there are regrets But sometimes it looks as if there arent.. 2 Months and WOW 1 Year and such a big difference Is this even the same person? It's crazy what 2 years can do

The Trans Inquiry Report: A Non-Binary Summary In the small hours of this morning, many of us could be found reading the Trans Inquiry report [1] as released by the Women and Equalities Commission at midnight. While not legally binding in itself, it is the result of months of investigation chaired by Maria Miller MP and is likely to be influential. During the inquiry, evidence was submitted to the panel, some of it by people whose gender transcends the binary. The report openly states that “it was not possible within the scope of our inquiry to undertake an in-depth consideration of the position of all non-binary and non-gendered people” [Page 5] and as such it doesn’t recommend steps for nonbinary inclusion and recognition as firmly and to the same extent as it does for binary trans people. – It recommends a wholesale review that includes an investigation of the needs of nonbinary people within the next six months. [Page 9] – It recommends that the UK offer the option of X as a gender marker on passports to anyone who asks for it.

Meet Hari Nef, the transgender top model who is blurring fashion’s gender boundaries, all the latest styles | Fashion Life is full of chances, the HSC is just one The ad every 17-year-old should watch Western Sydney University's powerful advertisement about the achievements of a young refugee. On Monday, NSW year 12 students will sit the first of their Higher School Certificate examinations, for English. The exams run over the next few weeks until November 6. For many the long anticipation will have been intense and the last few months stressful. Sitting down with the questions in front of them will be a relief. For others the exams will be a relief for a different reason. A still from the Western Sydney University video about Deng Adut. Another group will approach the exams knowing that, for whatever reasons, they have not fulfilled their potential at school. The 69,211 individual (mainly) 17- and 18-year-olds who make up the 2K15 HSC cohort (as they like to call themselves) will have experiences of their final school year, and attitudes towards their exams, as diverse as would you would expect from any cross section of the population.