The Road to World War 3 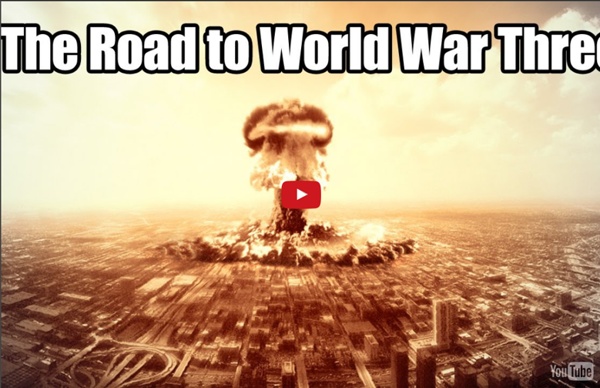 September 2013 Breaking News Mounting evidence suggests Israeli strike on Iran approaching Nuclear Deal With Iran Prelude to War, Not "Breakthrough" Tony CartalucciActivist Post "...any military operation against Iran will likely be very unpopular around the world and require the proper international context—both to ensure the logistical support the operation would require and to minimize the blowback from it. The best way to minimize international opprobrium and maximize support (however, grudging or covert) is to strike only when there is a widespread conviction that the Iranians were given but then rejected a superb offer—one so good that only a regime determined to acquire nuclear weapons and acquire them for the wrong reasons would turn it down. Written years ago, as the US, Saudi Arabia, and Israel were already plotting to overrun Iran's neighbor and ally Syria with Al Qaeda to weaken the Islamic Republic before inevitable war, this quote exposes fully the current charade that is the "Iran nuclear deal." If you enjoy our work, please donate to keep our website going.

Terminator Robots to Take Over the Battlefield by 2023? Nicholas WestActivist Post The U.S. military's pursuit of killer robots continues to make the news, despite the concerns of major international human rights groups who have launched a campaign to stop the runaway development of robots for war. Cambridge University has even launched a "Terminator" study program known officially as the Centre for the Study of Existential Risk. Nevertheless, the military-industrial complex and their partners in the Congressional "drone caucus" are reaping big profits from machine warfare. However, studies done within the military have revealed that there has been an emotional connection established, with some soldiers even mourning robots that have been "killed" in action. Not only will soldiers be outnumbered -- they will be massively outnumbered ... by a factor of 10 to 1 according to robotic weapons expert, Scott Hartley: ten years from now, there will probably be one soldier for every 10 robots. Daksh – Daksh is one of the most current military robots.

While the World Watches the Iran Talks, Japan and China Move Closer to War Chris CarringtonActivist Post A small group of uninhabited islands, the Senkaku Islands if you are Japanese, the Diaoyu Islands if you are Chinese, are causing major friction between the countries. China has created a new ‘air defense identification zone’ over the disputed waters around the islands. The islands are claimed and controlled by Japan and Japan purchased three of the islands from a private citizen who owned them in September 2012. China, though, still claims the islands are in their territorial waters. Taiwan has also laid claim to the small island chain and has declared that it would “defend its sovereignty of the archipelago”. The air defense zone came into effect on Saturday and China is insisting that all aircraft passing through the zone must: “maintain two-way radio communications” and “respond in a timely and accurate manner” to identification inquiries, China’s Defence Ministry said. So why all the fuss? Read more…

China-Japan Spat Could Lead to World War III Chris CarringtonActivist Post As the row over the rocks that are claimed by not only Japan and China, but South Korea and Taiwan continue, a former UN Ambassador has warned that any conflict in the region could quickly become global. Former Chinese Ambassador Sha Zukang said in a report in The China Times: If China started a war with Japan, it would be much larger than both the Sino-Japanese War and World War II, said Sha. The United States and Japan should cooperate with China to maintain regional peace. In the last few days Japan has set up its own air defense zone, and that has spurred South Korea to do the same. A report by political and economic analyst Ambrose Evans-Prichard states: Beijing’s implicit threat to shoot down any aircraft that fails to adhere to its new air control zone in the East China Sea is a watershed moment for the world. Japan’s foreign minister, Fumio Kishida, accused China of “profoundly dangerous acts that unilaterally change the status quo”.

US Hawks Want War on Iran Stephen LendmanActivist Post Neocons infest Washington. Norman Podhoretz is one many loathsome examples. On December 11, he headlined a Wall Street Journal op-ed "Strike Iran Now to Avert Disaster Later." No respectable editors would touch this trash. Podhoretz isn't America's only lunatic hawk. "Is the Bush Administration merely going to slink out of office with that legacy," it asked? "The Iranians aren't likely to stop unless the US starts doing something about it," it claimed. In 2008, then presidential candidate John McCain advocated bombing Iran. Then presidential aspirant Hillary Clinton was just as abhorrent. I want the Iranians to know that if I'm president, we will attack Iran. In the next 10 years, during which they might foolishly consider launching an attack on Israel, we would be able to totally obliterate them. Iranophobe Dick Cheney wants war on Iran. Podhoretz met privately with Bush when he was president. You have an awesome responsibility to prevent another holocaust.

Syria's War: The Next Phase "Moderate" myth is dropped as West prepares to leverage terror threat to end war in their favor. Tony CartalucciActivist Post The alleged fleeing of General Selim Idriss of the so-called "Free Syrian Army" (FSA), was more symbolic than anything else. Image (AFP Photo/Daniel Leal-Olivas): The West has abandoned the "moderate" myth to fully embrace the terror menace it itself has created in Syria. It was as early as 2007 when it was revealed that the US, Israel, and Saudi Arabia were planning on building up extremists within and around Syria for the purpose of eventually overthrowing the government. To undermine Iran, which is predominantly Shiite, the Bush Administration has decided, in effect, to reconfigure its priorities in the Middle East. While the initial conflict was disingenuously portrayed as the spontaneous militarization of unarmed protesters fighting against a "brutal regime," in reality Al Nusra was already inside the country and operating on a national scale.

Obama and the plan for World War 3 - Best documentary film 2013 Unmanned: America's Drone Wars The U.S. preferences are always to capture the terrorists because of the intelligence that can be gathered, but lots of the terrorist networks operate in a very remote regions and it's very difficult to capture them. However, of what we can discern from the pattern of drone strikes is that essentially Pakistan's been declared a no-capture zone. Captures automatically are not considered feasible. If you just look at the numbers, there have been dramatically more people killed in recent years than captured. Three to four thousand people have been killed in targeted killings and only a handful have been captured. Under the interpretations from the administration and the members of Congress, drone strikes could go on indefinitely against enemies who keep morphing into new enemies, but killing should be the exception not the rule. Before any strike is taken there must be near certainty that no civilians will be killed or injured. This documentary is available for preview only - .

WW3 Alert: Philippines Sends More Warships To South China Sea (Video) | China (Before It's News) The Philippine navy hopes to add two more warships to its fleet as Southeast Asian countries continue to expand their militaries in response to the Chinese government’s increasingly assertive territorial ambitions in the South China Sea, also known as the West Philippine Sea. Armed forces chief of staff General Emmanuel Bautista said the new acquisitions would come under the fresh U.S. military assistance plan announced last month by U.S. Secretary of State John Kerry when he visited the Philippines. China began widening its territorial claims about five years ago to include nearly all of the seas dividing South-East Asian countries and their northern neighbour. This comes amid concerns that the Chinese have plans to invade an island occupied by the Philippine military.

Why 57 (War?)Ships Off East Coast? EMP? Nukes? Invasion? | War and Conflict (Before It's News) HUGE UPDATE!!! YouTube has DELETED the 2 YouTube channels of the videographers who created this video, the Courageous Nerdz. Why were 57 (war?) Published on Feb 11, 2014 IRANIAN WARSHIPS RAISE EMP PENTAGON TELLS IRAN TO SAIL WARSHIPS ON THE EAS U.S. FLASHBACK TO AUGUST 2013 ; HEADLINE :57 SHIPS ANCHORED OF THE EAS Approaching Iranian warships raise EMP threat Text smaller Text bigger WASHINGTON – National security experts have expressed alarm over the announcement by Iran that it will position its warships off the coast of the United States, from where they could launch a nuclear warhead to explode at high altitude to create an electromagnetic pulse. That could knock the American electrical grid out of commission, disrupting supplies of energy, food, communications, fuel and more for a long period. These experts agree that there would be no warning and that the U.S. missile defense system would not be able to respond in time to prevent the high altitude nuclear explosion. They also believe that if such a missile were launched, it would not be from an Iranian warship but from a commercial vessel sailing along the East Coast or in the Gulf of Mexico. Last month, the Iranian Fars News Agency announced that the fleet would undertake a three-month mission and would consist of a destroyer and a helicopter-carrying vessel. This deployment to the U.S.

Covert chemical warfare/and a time bomb in Ukraine Jon RappoportActivist Post In the entirely justified blow-up over the poisonous effects of Monsanto’s Roundup, recent history has been pushed to the side. There are, of course, other companies and other poisons (herbicides, pesticides). For example, read this from “Transport and Trade,” published by the Pesticide Action Network: “…US [companies] shipped nearly 1.7 billion pounds of pesticide products to other countries from 2001-2003… “more than 32 tons per hour… “Nearly 28 million pounds of these pesticides are banned for use in the US.” Consider this broad 1997 indictment: “…large international corporations are able to sell pesticides abroad that cannot be sold in the U.S. A case in point: Propargite. Here are quotes from the Monitor article: “The US-based Uniroyal Corp. will continue selling a hazardous pesticide to farmers overseas even though the product has been withdrawn from domestic markets for ‘health and safety reasons.’” “In a recent agreement with the U.S. Here’s the capper: