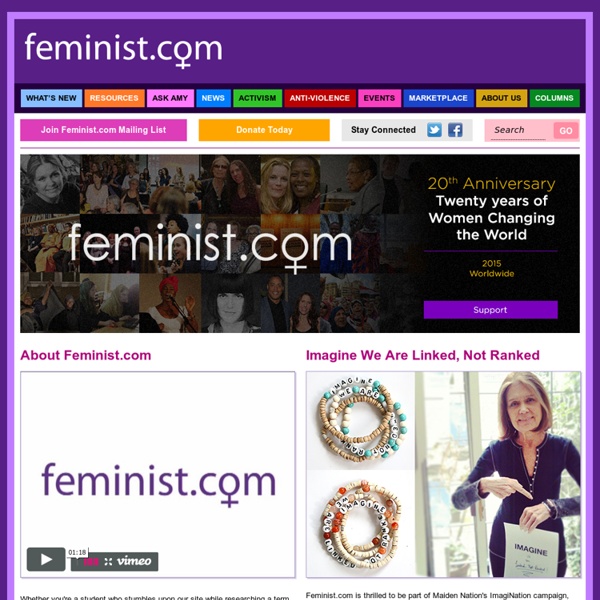 The XX Factor Thanks to the BuzzFeed quiz, we now all know which city we should live in (Paris), what kind of sandwich we are (grilled cheese), and which Twin Peaks character we are (Agent Dale Cooper). BuzzFeed quizzes exploit our urge to belong, to categorize ourselves into an identifiable group that we are instantly a part of. (Oh, you’re a Miranda? Me too!) Which is why the latest BuzzFeed quiz, “How Metal Is Your Period?” is such a masterpiece of the form. The questions range from the mundane (Q: “Have you ever tried to put in a tampon only to discover you forgot to take the old one out?” Women, take this quiz and rejoice: You are not alone.

Hoyden About Town: a mixed bag of uppity women blogging from Australia Links - Feminist Webs Want ACCESS to more and the best links available online? Suffrage Movement The BBC have put a fantastic new archive of materials on the British suffrage movement online: Then and Now Bolton Women’s Liberation Group existed from 1971 until 1986. In the twenty first century we are developing a project to make our archives accessible. Violence and Safety Chris Green, the UK Director for the White Ribbon Campaign. Also a short video trailer to help explain what the campaign is about, available on You Tube: Interestingly and perhaps logically, on a dating website, there is a good guide to personal safety that can be adapted to use with young people. Work and leisure Here is a link to the women and employment section on the new Equalities and Human Rights commission website. www.equalityhumanrights.com

CWAA International Women's Day Facts | Mental Floss Every year on April 1, when jokesters pull out their best pranks and hoaxes, you may have asked yourself: How did this weird tradition start, anyway? The answer is ... no one really knows. In fact, the origins of April Fools’ Day have long been caught up in myth and legend. The Many Origins of April Fools' Day Some have taken the origin back to Noah sending out the dove before the flood was over, or the Roman festival Saturnalia. Then, in 1983, an intrepid AP reporter interviewed a professor at Boston University about the history of the day. According to the professor, Constantine was told by his court jesters that they would make better rulers than him, and rather than immediately feeding everyone to the lions, Constantine allowed his jesters to rule for a day. Mystery solved, right? That was the end of the road for Kugel, and there's little to no evidence for any of the other theories, either. A Calendar of Fools There are a few problems with this hypothesis, though.