Maps to be Used for the History of Europe 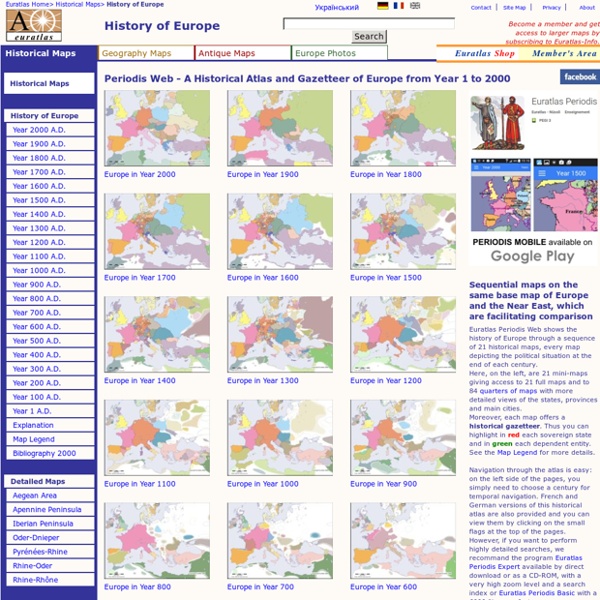 Euratlas Periodis Web shows the history of Europe through a sequence of 21 historical maps, every map depicting the political situation at the end of each century. Here, on the left, are 21 mini-maps giving access to 21 full maps and to 84 quarters of maps with more detailed views of the states, provinces and main cities.Moreover, each map offers a historical gazetteer. Thus you can highlight in red each sovereign state and in green each dependent entity. See the Map Legend for more details. Navigation through the atlas is easy: on the left side of the pages, you simply need to choose a century for temporal navigation. French and German versions of this historical atlas are also provided and you can view them by clicking on the small flags at the top of the pages. Periodis is a historical atlas of a new kind. History by Periods History is a continuous string of events among which prominent facts sometimes emerge: wars, conquests, revolutions etc.

The Britannia Lexicon Have you always wanted to travel back in time to the Middle Ages but were hesitant because you didn't speak the language? Presenting the Britannia Lexicon of strange legal, feudal, chivalric, monastic, military and architectural terms to help you understand what those guys back then were really trying to say. In addition, we will soon be including lengthier entries on particular events, wars, movements and organizations, called "Sidebars of History" which will give a more in-depth view of life, politics and religion in medieval Britain. Infographics - Own your Information I am a Visual Arts teacher, just so you might start to understand my next comment. I love good Infographics ! I can not think of another technique that condenses the essence of a message down into a more accessible and easily understood medium. I love the way that; - the graphic can be the of hero the story - simple images can tell complicated stories - the combination of graphics and facts can explain a complex concept - facts and figures can be portrayed in an exciting and visually appealing way - the portrayal of the information becomes as important as the message Sometimes I think it is this last point that interests me the most.

History Map Archive Browse the Map Archive The art and history of cartography, aka mapmaking, goes back to ancient times. Or at least what they thought it could look like. Our English word map derives from the Latin word mappa, meaning napkin or cloth on which maps were drawn. The Map Archive This map collection is indexed chronologically and by continent. Historical Maps - Perry-Castañeda Map Collection - UT Library Online My accounts | Give Home > Finding Information > PCL Map Collection > Historical MapsMaps FAQ Map Room Guide World Africa

Medieval and Renaissance Fact and Fiction undefined This page is meant to be a guide to resources available on the Web for people who are interested in the history, culture, literature and re-creation of the Middle Ages and Renaissance. There are hundreds of sites on the Middle Ages on the Web. I know I have only a small percentage of what is out there, but I have tried to organize this site so that you will have an easier time finding what you want. Please e-mail me to let me know about good sites that I haven't included yet. Google Maps Launch Google MapsLaunch Maps in LUNA Browser The over 120 historical maps in the Google Maps have been selected by David Rumsey from his collection of more than 150,000 historical maps; in addition, there are a few maps from collections with which he collaborates. These maps can also be seen in the Gallery layer of Google Earth, Rumsey Historical Maps layer, and in the Google Earth viewers on this website. All the maps contain rich information about the past and represent a sampling of time periods (1680 to 1930), scales, and cartographic art, resulting in visual history stories that only old maps can tell.

The Thousand-Year Graveyard Badia Pozzeveri Churchyard, Altopascio, Italy—On a hot afternoon in July 2012, Giuseppe Vercellotti was digging up bones near the wall of an abandoned medieval church here, thinking about getting a cold drink, when he heard his students call his name. Faces glistening with sweat, they told him that they had found something strange buried half a meter down. Vercellotti took a look and saw a layer of lime, used in ancient times to squelch the stench of rotting corpses. When he tapped the hard layer with his trowel, it sounded hollow. “We immediately thought it was a mass grave,” says Vercellotti, a biological anthropologist at Ohio State University, Columbus, who co-leads a field school here. Home Click here to jump straight to the articles: Original Preface. The Catholic Encyclopedia, as its name implies, proposes to give its readers full and authoritative information on the entire cycle of Catholic interests, action and doctrine. What the Church teaches and has taught; what she has done and is still doing for the highest welfare of mankind; her methods, past and present; her struggles, her triumphs, and the achievements of her members, not only for her own immediate benefit, but for the broadening and deepening of all true science, literature and art — all come within the scope of the Catholic Encyclopedia.

Medieval Wild Man relic discovered by treasure hunters has roots in ancient history English metal detectorists have found a Medieval spoon handle depicting a figure of the Wild Man, a hairy, club-wielding legend who existed on the edges of civilization from ancient times. Stories about the Wild Man differ, some say he was a prophet, or that he went mad with grief over the loss of his beloved, or that he was a monster slayer and hero. Two years ago the metal detectorists found the 15th century AD metallic figure.

Famous People of World War Two Influential people who caused, influenced and fought during the Second World War. Adolf Hitler (1889 – 1945) Dictator of Nazi Germany from 1933-45. During the 1930s, Hitler sought to gain ‘lebensraum’ for Germany – claiming Austria, Czechoslovakia and finally invading Poland. Hitler’s initial success encouraged him to invade Russia, which ultimately would over-stretch his war-machine. Hitler’s regime also pursued the extermination of Jews and other ‘non-Aryan’ minorities in concentration camps across Europe. He committed suicide in May 1945 – shortly before Germany’s final surrender.

It is neat watching the rise and falls of the Roman Empires, the fracturing of the Islamic Caliphate, the rise of the nation-state, and more. The maps are surprisingly detailed and some centuries have city plans available for view by macopa Sep 3