Syria Airstrikes Vote: Frankie Boyle Attacks MPs Who Voted For Bombings To Fight Isis. Comedian Frankie Boyle has penned a stinging riposte to MPs who voted for airstrikes in Syria this week, in a damning assessment of what increased military involvement in the region will do. 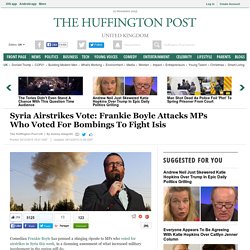 The TV personality-turned-political-pundit lambasted parliament's "palpable excitement" over the vote which gave the all-clear to RAF jets to commence a bombing campaign to target the Islamic State group. "The motion they voted on was a vague list of 'necessary measures' and 'requests for assistance'," he began, "with 'specifically airstrikes' at the very bottom – as if someone had shouted it out of the front door as they were starting the car: 'Oooh! Don’t forget eggs, milk – and airstrikes!!

'" Writing in his weekly Guardian column, Boyle went on to lambast Labour's shadow foreign secretary, Hilary Benn, who made a widely-praised and impassioned plea to his colleagues to back airstrikes - having opposed them in 2013. ISIS survives largely because Turkey allows it to: the evidence. Kurdish (YPJ) frontline troops The real frontline confronting ISIS is not US or French bombers (the latter currently targeting Raqqa, a city with 140,000 civilians, who are virtual prisoners of ISIS) but the Kurds of Iraq and northern Syria. 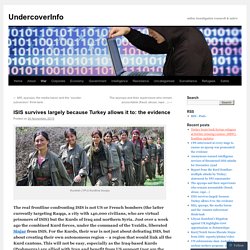 Just over a week ago the combined Kurd forces, under the command of the Yezidis, liberated Sinjar from ISIS. For the Kurds, their war is not just about defeating ISIS, but about creating their own autonomous region – a region that would link all the Kurd cantons. This will not be easy, especially as the Iraq-based Kurds (Peshmerga) are allied with Iran and benefit from US support (nor are the Iraqi Kurds in any hurry to secede from Iraq).

But the largest hurdle to an autonomous Kurdistan is Turkey, which not only has rekindled its war with the PKK (Kurdish Workers Party), but has done everything it can over the last 12 months or so to ensure Kurd victories against ISIS were minimised. A. Kurds celebrating liberation of Kobani B. Finally, Dr. 1. 2. NATO is harbouring the Islamic State — INSURGE intelligence. “We stand alongside Turkey in its efforts in protecting its national security and fighting against terrorism. 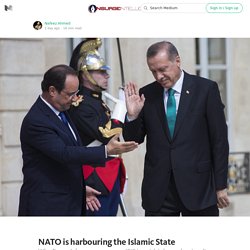 France and Turkey are on the same side within the framework of the international coalition against the terrorist group ISIS.” Statement by French Foreign Ministry, July 2015 The 13th November Paris massacre will be remembered, like 9/11, as a defining moment in world history. Reza Aslan Slams Bill Maher for ‘Facile Arguments’ About Muslim Violence. 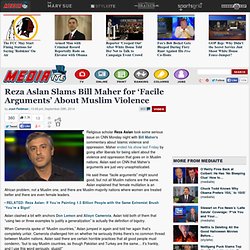 Maher ended his show last Friday by going after liberals for being silent about the violence and oppression that goes on in Muslim nations. Aslan said on CNN that Maher’s arguments are just very unsophisticated. He said these “facile arguments” might sound good, but not all Muslim nations are the same. Aslan explained that female mutilation is an African problem, not a Muslim one, and there are Muslim-majority nations where women are treated better and there are even female leaders. RELATED: Reza Aslan: If You’re Painting 1.5 Billion People with the Same Extremist Brush ‘You’re a Bigot’ Aslan clashed a bit with anchors Don Lemon and Alisyn Camerota. When Camerota spoke of “Muslim countries,” Aslan jumped in again and told her again that’s completely unfair. Watch the full segment here, via CNN: And you can watch Maher’s commentary here, via HBO: 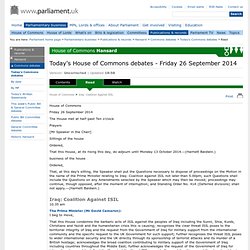 We tried to, but the Americans took no notice, frankly. In the Syrian horror from which ISIL has sprung, of course Assad’s forces have unleashed waves of terror, but his jihadist opponents too have committed terrible atrocities. That is the context that has given birth to ISIL; not because the House prevented the Prime Minister from armouring moderate rebels in the Free Syrian Army. Had the Prime Minister got his way last August, where might those British arms have ended up? Syria never was some simplistic battle between evil and good; between a barbaric dictator and his repressed people. Even more crucially, Assad is backed by 40% of his population. Our failure to undertake that is a major reason why the civil war, in my view, has been so prolonged and why ISIL has been allowed to flourish.

But the elephant in the room, for me, remains Syria. Yet engaging does not mean befriending. “I would at least make a favourable reference to the devil in the House of Commons.” Zenpolitics: Stone Cold Justice - Australian TV reveal Israel's brutal abuse of Palestinian children.