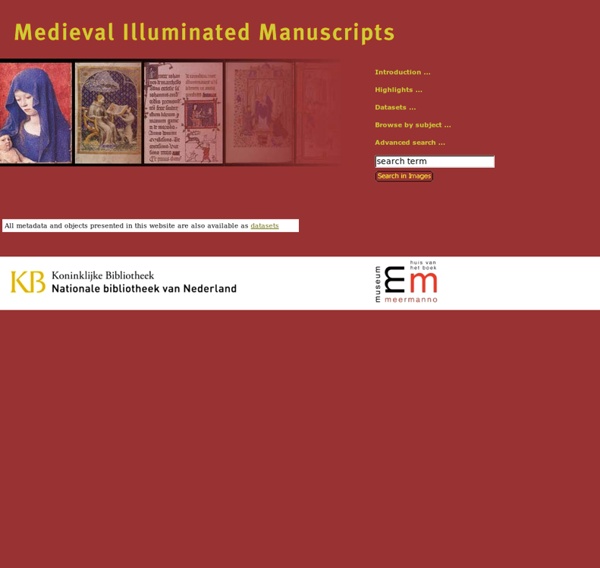 Internet History Sourcebooks Update Information 2006: In 2006 the Internet Medieval Sourcebooks and associated sourcebooks are undergoing a major overhaul to remove bad links and add more documents. 1. This project is both very large and fairly old in Internet terms. At the time it was instigated (1996), it was not clear that web sites [and the documents made available there] would often turn out to be transient. Glasgow Medieval manuscripts Middle English Literature: Medical manuscripts: University of Malaga website. NB. you need to register to use this website, then click on the appropriately numbered volume on the image of the bookshelf. Home Click here to jump straight to the articles: Original Preface. The Catholic Encyclopedia, as its name implies, proposes to give its readers full and authoritative information on the entire cycle of Catholic interests, action and doctrine. What the Church teaches and has taught; what she has done and is still doing for the highest welfare of mankind; her methods, past and present; her struggles, her triumphs, and the achievements of her members, not only for her own immediate benefit, but for the broadening and deepening of all true science, literature and art — all come within the scope of the Catholic Encyclopedia.

Harvard The Houghton Library’s distinguished collection of medieval and Renaissance manuscripts represents a significant resource for the study of the Middle Ages and the Renaissance in Western Europe. Assembled through gifts and purchase over the past two centuries, this collection includes works in Latin, Greek, and most of the vernacular languages of Europe that are the primary sources for the study of the literature, art, history, music, philosophy, and theology of the periods. This Web site provides strategies for searching Houghton's medieval manuscripts as well as links to bibliographies related to these materials that were compiled by the Library. Medieval and Renaissance Fact and Fiction undefined This page is meant to be a guide to resources available on the Web for people who are interested in the history, culture, literature and re-creation of the Middle Ages and Renaissance. There are hundreds of sites on the Middle Ages on the Web. I know I have only a small percentage of what is out there, but I have tried to organize this site so that you will have an easier time finding what you want. Please e-mail me to let me know about good sites that I haven't included yet.

The Britannia Lexicon Have you always wanted to travel back in time to the Middle Ages but were hesitant because you didn't speak the language? Presenting the Britannia Lexicon of strange legal, feudal, chivalric, monastic, military and architectural terms to help you understand what those guys back then were really trying to say. In addition, we will soon be including lengthier entries on particular events, wars, movements and organizations, called "Sidebars of History" which will give a more in-depth view of life, politics and religion in medieval Britain. The World Wide Web project The WorldWideWeb (W3) is a wide-area hypermedia information retrieval initiative aiming to give universal access to a large universe of documents. Everything there is online about W3 is linked directly or indirectly to this document, including an executive summary of the project, Mailing lists , Policy , November's W3 news , Frequently Asked Questions . What's out there? Pointers to the world's online information, subjects , W3 servers, etc.

The British Library You can • perform a quick search (this searches for a word or number in all sections of each catalogue entry, including images); • perform a simple search using keywords and dates; • look for information about a particular manuscript if you know its collection name and manuscript number; • perform an advanced search using different types or combinations of information; • explore the virtual exhibitions of various aspects of the British Library's western illuminated manuscript holdings; and • check the illustrated glossaries of terms. • download digital images for further reuse such as in educational contexts, placing on your blog or sharing with others. Please see guidance notes on Access and Reuse. Updated 23 March 2018.