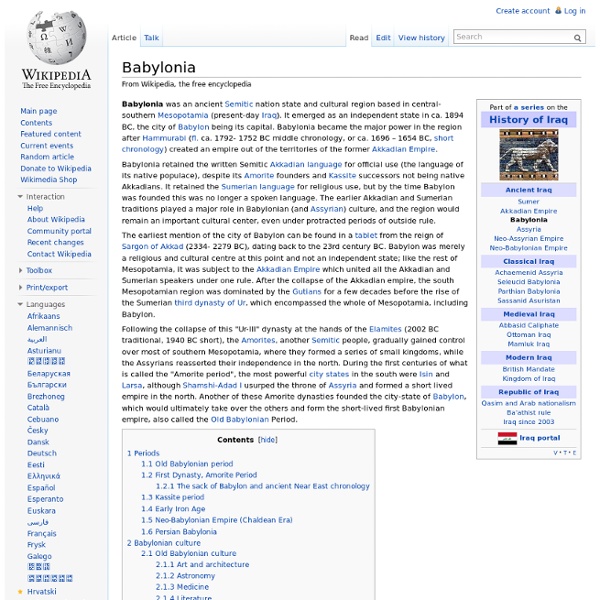 Babylonia was an ancient Akkadian-speaking Semitic nation state and cultural region based in central-southern Mesopotamia (present-day Iraq). It emerged as an independent state c. 1894 BC, with the city of Babylon as its capital. It was often involved in rivalry with its fellow Akkadian state of Assyria in northern Mesopotamia. The Babylonian state retained the written Semitic Akkadian language for official use (the language of its native populace), despite its Amorite founders and Kassite successors not being native Akkadians. The earliest mention of the city of Babylon can be found in a tablet from the reign of Sargon of Akkad (2334- 2279 BC), dating back to the 23rd century BC. Periods[edit] Old Pre-Babylonian period[edit] The extent of the Babylonian Empire at the start and end of Hammurabi's reign The empire eventually disintegrated due to economic decline, climate change and civil war, followed by attacks by the Gutians from the Zagros Mountains. The Empire of Hammurabi Related:  The Story of Human Language

Akkadian Empire Historical state in Mesopotamia Coordinates: 33°6′N 44°6′E / 33.100°N 44.100°E / 33.100; 44.100 During the 3rd millennium BC, there developed a very intimate cultural symbiosis between the Sumerians and the Akkadians, which included widespread bilingualism.[5] Akkadian, an East Semitic language,[6] gradually replaced Sumerian as a spoken language somewhere between the 3rd and the 2nd millennia BC (the exact dating being a matter of debate).[7] The Akkadian Empire reached its political peak between the 24th and 22nd centuries BC, following the conquests by its founder Sargon of Akkad.[8] Under Sargon and his successors, the Akkadian language was briefly imposed on neighboring conquered states such as Elam and Gutium. After the fall of the Akkadian Empire, the people of Mesopotamia eventually coalesced into two major Akkadian-speaking nations: Assyria in the north, and, a few centuries later, Babylonia in the south. History of research[edit] Dating and periodization[edit] Sargon of Akkad[edit]

Mesopotamia Map showing the extent of Mesopotamia Mesopotamia (from the Ancient Greek: Μεσοποταμία: "[land] between rivers"; Arabic: بلاد الرافدين‎ (bilād al-rāfidayn); Syriac: ܒܝܬ ܢܗܪܝܢ (Beth Nahrain): "land of rivers") is a name for the area of the Tigris–Euphrates river system, corresponding to modern-day Iraq, Kuwait, the northeastern section of Syria and to a much lesser extent southeastern Turkey and smaller parts of southwestern Iran. Widely considered to be the cradle of civilization in the West, Bronze Age Mesopotamia included Sumer and the Akkadian, Babylonian, and Assyrian empires, all native to the territory of modern-day Iraq. In the Iron Age, it was controlled by the Neo-Assyrian and Neo-Babylonian empires. The indigenous Sumerians and Akkadians (including Assyrians and Babylonians) dominated Mesopotamia from the beginning of written history (c. 3100 BC) to the fall of Babylon in 539 BC, when it was conquered by the Achaemenid Empire. Etymology Geography History Periodization Literature

Assyrian people Assyrian people (Syriac: ܐܫܘܪܝܐ‎), or Syriacs[37] (see terms for Syriac Christians), are an ethnic group indigenous to the Middle East.[38][39] Some of them self-identify as Arameans,[40] or as Chaldeans.[41] They speak East Aramaic languages as well as the primary languages in their countries of residence.[42] The Assyrians are typically Syriac Christians who claim descent from Assyria, one of the oldest civilizations in the world, dating back to 2500 BC in ancient Mesopotamia.[43] Assyrians are predominantly Christian, mostly adhering to the East and West Syrian liturgical rites of Christianity.[48] The churches that constitute the East Syrian rite include the Assyrian Church of the East, Ancient Church of the East, and Chaldean Catholic Church, whereas the churches of the West Syrian rite are the Syriac Orthodox Church and Syriac Catholic Church. Both rites use Classical Syriac as their liturgical language. History Pre-Christian history Language Early Christian period Arab conquest Culture

30th century BC The 30th century BC was a century which lasted from the year 3000 BC to 2901 BC. Events[edit] Stele bearing the name of Djet Significant people[edit] Inventions, discoveries, introductions[edit] 3000 BC–2000 BC; Hieroglyphic writing in Egypt, potter's wheel in China, first pottery in the Americas (in Ecuador).c. 3000 BC—Sumerians establish cities.c. 3000 BC—Sumerians start to work in various metals.c. 3000 BC—Knowledge of Ancient Near Eastern grains appears in Ancient China.3000 BC-2000 BC - Settled villages are widespread in Mesoamerica.The shekal was introduced in Mesopotamia as a monetary and weight unit; see ancient weights and measures, Shekel.The Sydney rock engravings date from around 3000 BC (Sydney, Australia).[3] Fiction[edit] References[edit]

Akkadian language extinct Semitic language The mutual influence between Sumerian and Akkadian had led scholars to describe the languages as a Sprachbund.[5] Akkadian proper names were first attested in Sumerian texts from around the mid 3rd-millennium BC.[6] From the second half of the third millennium BC (c. 2500 BC), texts fully written in Akkadian begin to appear. Hundreds of thousands of texts and text fragments have been excavated to date, covering a vast textual tradition of mythological narrative, legal texts, scientific works, correspondence, political and military events, and many other examples. By the second millennium BC, two variant forms of the language were in use in Assyria and Babylonia, known as Assyrian and Babylonian respectively. For centuries, Akkadian was the native language in Mesopotamian nations such as Assyria and Babylonia. Classification[edit] Within the Near Eastern Semitic languages, Akkadian forms an East Semitic subgroup (with Eblaite). History and writing[edit] Writing[edit]

Sahel The Sahel region in Africa: a belt up to 1,000 km (620 mi) wide that spans the 5,400 km (3,360 mi) from the Atlantic Ocean to the Red Sea The Sahel (/səˈhɛl/)[1] is the ecoclimatic and biogeographic zone of transition in Africa between the Sahara to the north and the Sudanian Savanna to the south. Having a semi-arid climate, it stretches across the south-central latitudes of Northern Africa between the Atlantic Ocean and the Red Sea. The name is derived from the Arabic word sāḥil (ساحل, Arabic pronunciation: [ˈsaːħil]) meaning "coast" or "shore" in a figurative sense (in reference to the southern edge of the vast Sahara),[2][3] while the name Swahili means "coastal [dweller]" in a literal sense. Geography[edit] Camels trample the soil in the semiarid Sahel as they move to water holes, such as this one in Chad. The lush green of the rainy season Sahelian forest, along the Bamako-Kayes Road in Mali. Sahel people with livestock and azawakh dogs Flora and fauna[edit] Climate[edit] Culture[edit]