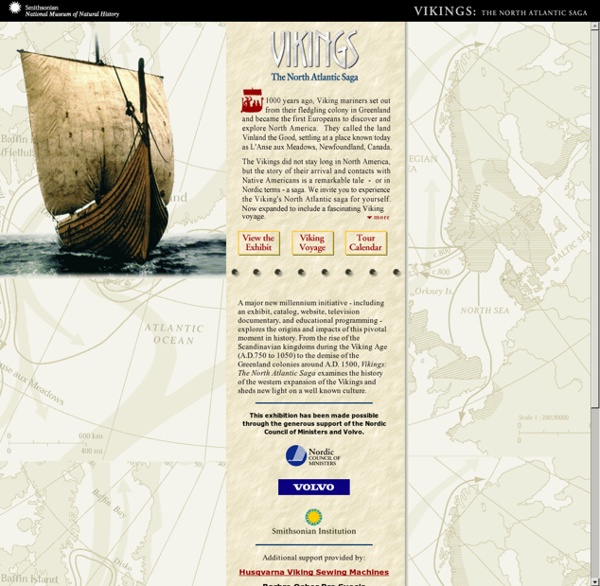 Secrets of Lost Empires | Medieval Siege | Destroy the Castle by Dennis Gaffney The trebuchet was one of the most devastating weapons of the Middle Ages. During medieval sieges, this destruction machine crushed castle walls. Using trial and error, medieval engineers adjusted the trebuchet to make sure its missile hit the castle wall—and destroyed it. NOVA's science game, "Destroy the Castle," is very much like the real thing. stone ball weight sling length counterweight design distance from the castle whether to add wheels Build it right, and you will crush the wall. Build it wrong, though, and you may have to face some painful consequences. Special thanks to Jim and Fran Sammons for their help in designing "Destroy the Castle." Medieval Arms Race | NOVA Builds a Trebuchet | Life in a Castle Destroy the Castle | Resources | Transcript Medieval Siege | Pharaoh's Obelisk | Easter Island | Roman Bath | China Bridge | Site Map

Science/Nature | Recreating a Viking voyage Six months ago I set out on the most unusual and the wettest journey of my life. I was on board a replica Viking longship, the world's largest and most authentic, which was attempting to sail from Denmark to Dublin. The aim of the voyage was to test the ship and gain an insight into how the Vikings would have fared when making the same journey. One of the first lessons was just how dependent we were on the weather. With two days of strong winds in the right direction, we had managed to sail over 250 miles (400km) in one stretch. But once we reached Norway, the situation changed. A Viking ship is very poor at tacking (sailing into the wind by zigzagging). Using the oars is possible for short distances but getting all the way to Scotland would take hundreds of hours of continuous rowing. So the only option was to wait for the wind to change. At first it was a welcome relief after 48 hours in an open boat in the rain. Wind and waves Eventually I found the captain who was busy organising repairs.

Oak Island Wikipedia article Oak Island is a 57-hectare (140-acre) island in Lunenburg County on the south shore of Nova Scotia, Canada. The tree-covered island is one of about 360 small islands in Mahone Bay and rises to a maximum of 11 meters (36 feet) above sea level. Located 200 meters (660 feet) from shore and connected to the mainland by a modern causeway, the island is privately owned. Oak Island is noted as the location of the so-called Money Pit and the site of over 200 years of treasure hunting.[1] Repeated excavations have reported layers of apparently man-made artifacts as deep as 31 metres (102 ft), but ended in collapsed excavations and flooding. The history of the island and the ongoing search for treasure are the subject of the reality television program The Curse of Oak Island, which premiered on the History Channel on January 5, 2014.[3] History of the Money Pit[edit] Early accounts[edit] Oak Island Association and Old Gold Salvage group[edit] Gilbert Hedden and William Chappell[edit] [edit]

Black Plague Simulation A "Time Travel" Pilgrimage/Voyage during the time of the Black Plague Your old pal Professor Sy Entz has been reworking his Time Travel Machine in the garage. You have stopped by after school and are having a conversation with him about the early Renaissance and Medeval period in Europe (he is a history buff, besides being a science genius!). You muse half-aloud, "Wouldn't it be great to travel back to the days when people wore those interesting clothes and there were fortresses and knights and damsels and all of that kind of stuff?" "Of course," mentions Professor Entz, "this was a time of great pestilence, including cholera and the Black Plague!" YOU have recently been studying bacteria and viruses, and you reply "Professor, do you know that the Plague even exists today and may someday again be a serious health problem? Professor Entz is surprised by your knowledge about this topic. "No," you reply. "Yes! "Are you still sure you would be interested in traveling back to that time?" "Oh?"

Viking ships A modern replica of a Viking ship. This ship is of the Snekkja longship type. Development[edit] The ship functioned as the centerpiece of Scandinavian culture for centuries. Faering[edit] A faering is an open rowboat with two pairs of oars, commonly found in most boat-building traditions in Western and Northern Scandinavia and dating back to Viking era Scandinavia.[2] Longships[edit] Animal head from Oseberg ship. The long-ship is characterized as a graceful, long, narrow, light, wooden boat with a shallow draft hull designed for speed. Longships can be classified into a number of different types, depending on size, construction details, and prestige. Longships were the epitome of Scandinavian naval power at the time, and were highly valued possessions. Karve[edit] Knarr[edit] Ship Construction[edit] Working up from a stout oaken keel, the shipwrights would rivet the planks together using wrought iron rivets and roves. [edit] Culture and traditions[edit] Preserved ships[edit] See also[edit]

David&#039;s sling and stones Artist’s conception of David and the giant, Goliath Archaeologists discover more evidence that confirms the Bible Here is what an ancient sling looked like. It was made from animal hair. Many people think of ancient slings as not much more than toys. Bronze Age slingstones from Khirbet el-Maqatir (West Bank, Israel) Not naturally rounded, they all have evidence of being shaped by man. Archaeologists are finding evidence that confirms these biblical stories. At one excavation site in Israel, 10 miles north of Jerusalem, slingstones have been found in almost every area of the dig. "After three seasons of excavation, we have found nearly three dozen slingstones. The Art of Slinging Stones A sling such as David may have used. It is unclear when men first started slinging stones instead of throwing them. Ancient hand slings generally consisted of a single long strip of leather or woven wool, with a central “pocket” for the stone. Fast, accurate and deadly weapons Not all slingstones were stones

A medieval mystery - The National Archives Tax records can tell us a great deal about life in the Middle Ages. They don’t usually come with pictures, but this one does. It is a cartoon from 1233 during the reign of King Henry III. It’s a detailed, complex cartoon and it is a bit of a mystery. It was found on an Exchequer Roll, a kind of government document recording various payments that is stored rolled up. This roll listed tax payments made by Jewish people in the city of Norwich in Norfolk. Tasks 1. A castlePitchforksA set of scalesA womanA crownDevils 2. 3. 4. What is the man holding? 5. Who are the people shown here? 6. Who do you think he is supposed to be? 7. What do you think these characters are supposed to be? 8. Background Persecution of the Jews The terrible treatment of Jews by the Nazi Government in the 1930s and 1940s was not a new event. At the time this roll was written Jews in England were subjected to heavy taxes, had property stolen or confiscated and were sometimes attacked. Medieval Norwich Teachers' notes Mosse Mokke

Regia Anglorum - Viking Ship Construction Who were these fierce warriors who came from the countries that we call Denmark, Norway and Sweden today? Well, they were not the only sea pirates to use ships of the kind you can see on the left - but they are the ones that we know best. The Viking Age for England started in 793AD with the raid on the Monastery at Lindisfarne Island high up on the Northeast coast of Britain and more or less came to an end in 1066AD at the battle of Stamford Bridge near York. It must have been an apprehensive time through which to live, but although it lasted for 273 years, there were never more than a few thousand raiders involved at any time. Many English people must have lived out their lives without ever seeing a Dane - as the Anglo-Saxon Chronicle invariably calls these fearsome foes. Without their ships, and the ability to pick and choose where to attack, they would have only been a footnote on history's page, so let's look at what made these craft so special, and the Vikings so feared.

Legio XX Armoring Hints ---------- *Home*Schedule*Handbook *Auxiliaries *Civilian Clothing *Cold-Weather Clothing *Signum*LINKS*SUPPLIERS*Bibliography * *ADLOCVTIO*Tent and Camp *Roman Days*History*Names *Advice on Starting a Group *PHOTOGRAPHS*Bylaws *Membership* ---------- *Home*Handbook Intro*Tunic*Caligae*Cloak*Belt*Helmets*Segmentata*Hamata*Squamata*Subarmalis*Scutum*Gladius* *Pilum*Pugio*Packs*Mess Gear*Tools*Crests*Drill*Leatherworking*Armoring* ---------- To start off with, a Disclaimer: I am NOT a trained armorer or blacksmith! Anyone who is will find at least a few things here to dispute or cringe at. This information is mostly intended for people who have little experience, few tools, and limited facilities, but would like to try making their own equipment anyway. I wouldn't quite say that "anyone can do this", and certainly this is not the only way to do it, but it's what has worked for me. This page is still new and growing. There is also a page on Leather Tips. SAFETY FIRST!

Witnesses to Joan of Arc and The Hundred Years' War Activity 1. Joan of Arc's Trials: The Testimony of the Witnesses You will be assigning excerpts from the trial transcripts to small groups of students. What strategy did they employ? Now, assign the excerpts you want the students to use. NOTE: The excerpt titles in the LaunchPads link directly to the page in the transcript on which the excerpt begins. The excerpts from the trial for each group are available here as Student Launchpads. What does this excerpt tell us about the events that the speaker witnessed? They should also seek to answer more general questions about what these excerpts from the trials tell us about Joan of Arc. What does this excerpt tell us about Joan's motivations? After each account is offered, the group leads the class in briefly discussing the excerpt. What evidence from the excerpts tends to support the thesis? Now each student should develop a thesis in answer to one of the student-raised questions. Activity 2. Activity 3.

ORB: Iron and Steel Production in the Middle Ages {*style:<b><i>Medieval Science and Technology: Original Essays </i></b>*} Institute for the History and Philosophy of Science and Technology University of Toronto Iron is one of the most useful metals ever discovered, but it is also one of the more difficult metals to understand in history, especially in medieval history. Pure, unadulterated iron is only moderately hard, as anyone who has bent a nail with a hammer can attest. Cast iron, on the other hand, is enormously strong. Steel, iron with a small amount of carbon dissolved inside its structure, combines the best of both worlds. Carbon is the major variable that distinguishes between wrought iron, steel, and cast iron. The job of the smelting furnace is to reduce the metal from its chemically combined state to a metallic state. The smelting furnace has two tools to bring about this transformation: heat and carbon. The temperature inside the furnace is a critical variable. The bloomery type of smelter must produce wrought iron.