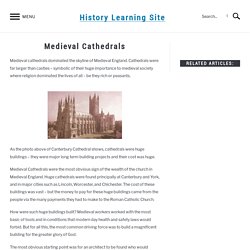 Cathedrals were far larger than castles – symbolic of their huge importance to medieval society where religion dominated the lives of all – be they rich or peasants. As the photo above of Canterbury Cathedral shows, cathedrals were huge buildings – they were major long term building projects and their cost was huge. Medieval Cathedrals were the most obvious sign of the wealth of the church in Medieval England. Huge cathedrals were found principally at Canterbury and York, and in major cities such as Lincoln, Worcester, and Chichester. Standing the test of time: Notre-Dame Cathedral in Paris. History - British History in depth: The Cathedrals of Britain. Teacher’s guide: Notre Dame Cathedral fire. Directions: Read the summary, watch the videos and answer the discussion questions below. 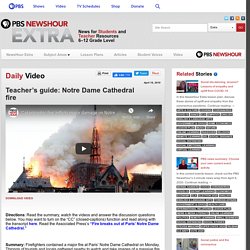 You may want to turn on the “CC” (closed-captions) function and read along with the transcript here. Read the Associated Press’s “Fire breaks out at Paris’ Notre Dame Cathedral.” Summary: Firefighters contained a major fire at Paris’ Notre Dame Cathedral on Monday. Medieval Christmas: 10 Festive Facts - HistoryExtra. Your guide to Christmas in the Middle Ages… Don’t go over the top Medieval Christmas wasn’t quite the all-encompassing celebration it often is today, so relax a little. 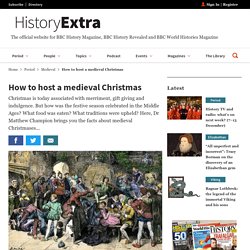 A Medieval Christmas. Christmas was one of the highlights of the medieval calendar, not only for the rich but also for the peasantry. For the longest holiday of the year, typically the full twelve days of Christmas, people stopped work, homes were decorated and a Yule log burned in the hearth. Gifts were exchanged, colourful church services enjoyed and merry feasts were eaten by all where there was better food and more of it than at any other time in the year. There were plenty of songs, dancing, pantomimes and games, too. Medieval Christmas. Christmas in Medieval England was very different to Christmas now. 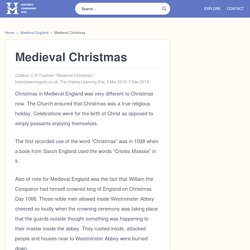 The Church ensured that Christmas was a true religious holiday. Celebrations were for the birth of Christ as opposed to simply peasants enjoying themselves. KS3 Bitesize History - The Black Death : Revision, Page 3. Chivalry in the Middle Ages. A Day of Knights. What is a knight? 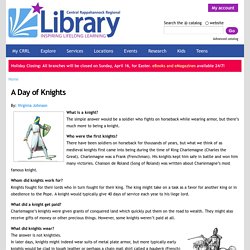 The simple answer would be a soldier who fights on horseback while wearing armor, but there’s much more to being a knight. Who were the first knights? There have been soldiers on horseback for thousands of years, but what we think of as medieval knights first came into being during the time of King Charlemagne (Charles the Great). Charlemagne was a Frank (Frenchman). His knights kept him safe in battle and won him many victories. Whom did knights work for? What did a knight get paid? What did knights wear? The answer is not knighties. Hauberk: a chain mail shirt Helmet: a metal covering for the head. Did knights go to knight school? Page: Boys as young as seven would begin work as pages in a castle. Could anyone be a knight? Domkerk. The birth and growth of Utrecht At the beginning of the Christian era, the Romans dominated extensive parts of Europe. 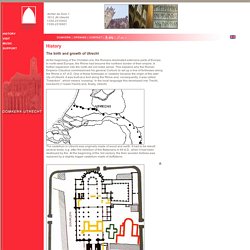 In north-west Europe, the Rhine had become the northern border of their empire. A further expansion into the north did not make sense. This explains why the Roman Emperor Claudius commissioned his general Corbulo to set up a line of fortresses along the Rhine in 47 A.D. Utrecht as a medieval town - Het Utrechts Archief. Utrecht in the Middle Ages (1000-1500) IntroductionIn the middle ages the city of Utrecht was the most important city in what is now The Netherlands. 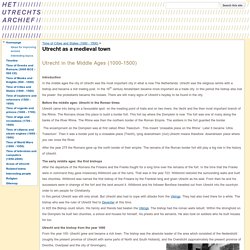 Utrecht was the religious centre with a bishop and became a rich trading post. Children of the Middle Ages. Highlights from The Book of Chivalry. Advice on Conduct Toward Friends and Enemies There is a supreme rule of conduct required in these good men-at-arms as the above-mentioned men of worth inform us: they should be humble among their friends, proud and bold against their foes, tender and merciful toward those who need assistance, cruel avengers against their enemies, pleasant and amiable with all others, for the men of worth tell you that you should not converse at any length nor hold speech with your enemies, for you should bear in mind that they do not speak to you for your own good but to draw out of you what they can use to do you the most harm. 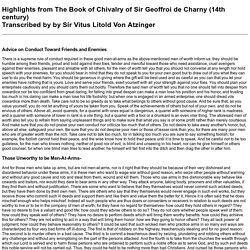 You should be generous in giving where the gift will be best used and as careful as you can that you let your enemies have nothing that is yours. Love and serve your friends, exert yourself with all your strength against your foes. You should plan your enterprises cautiously and you should carry them out boldly. From A Knight's own Book of Chivalry. From "A Knight's Own Book of Chivalry" (Even though many ancient and contemporary sources contributed to the formation of Chivalry-Now, we consider it an authentic code of chivalry evolved from medieval traditions. 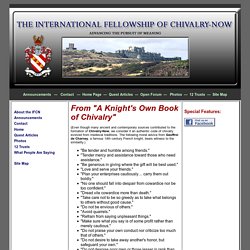 The following moral advice from Geoffroi de Charney, a famous 14th century French knight, bears witness to the similarity.) "Be tender and humble among friends. " "Tender mercy and assistance toward those who need assistance. " A Knight's Own Book of Chivalry. By Geoffroi de Charny. 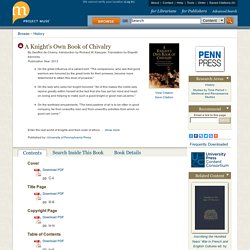 Introduction by Richard W. Kaeuper. Barbarians Rising: Rise and Fall of an Empire. The Lewis Chessmen - Origins and Evolution of Chess. In Focus: The Lewis Chessmen. The TRUTH about Chivalry and the Knight. Shadiversity. Castles: The Magnificence Of the Medieval Era - History Documentary Films. Medieval Manor M&Ms/ Feudal economic lesson. Teaching Feudalism in the Middle Ages. Medieval Society.

Documentaries Life in the Middle Ages

The term "scholastic" is derived from the Latin word "scholasticus" and the Greek "scholastikos" (meaning literally "devoting one's leisure to learning" or "scholar") and the Greek "scholeion" (meaning "school"). The term "schoolmen" is also commonly used to describe scholastics. Middle-Ages Science - Medieval Period - History of Science. Science and Medieval Society - Charlemagne, Scholasticism and the Scientific Method. Middle Ages, Peasant's Life. About nine tenths of the people were peasants--farmers or village laborers. Only a few of these were freemen--peasants who were not bound to a lord and who paid only a fixed rent for their land.

The vast majority were serfs and villeins. BBC - KS3 Bitesize History - Everyday life in the Middle Ages : Revision, Page 7. BBC - KS3 Bitesize History - Everyday life in the Middle Ages : Activity. The Lifestyle of Medieval Peasants. The lifestyle of peasants in Medieval England was extremely hard and harsh. Many worked as farmers in fields owned by the lords and their lives were controlled by the farming year. Certain jobs had to be done at certain times of the year. Their lives were harsh but there were few rebellions due to a harsh system of law and order. Medieval Farming. Farming dominated the lives of most Medieval people. Many peasants in Medieval England worked the land and, as a result, farming was critically important to a peasant family in Medieval England. Most people lived in villages where there was plenty of land for farming. Medieval towns were small but still needed the food produced by surrounding villages. Farming was a way of life for many.

Medieval farming, by our standards, was very crude. Harvesting a crop using sickles and scythes. The Parish Churches of Medieval England. Medieval Monday – An Introduction to Medieval Art. Once upon a time, many years ago, I went on a class trip to the Metropolitan Museum of Art in New York. As usual, the Met was packed. How Christianity Rose to Dominate Europe.