Good Question: Why Did Somalis Locate Here? « WCCO. MINNEAPOLIS (WCCO) — It is perhaps the least likely place to find tens of thousands of African refugees: the cold, snowy, middle of America. 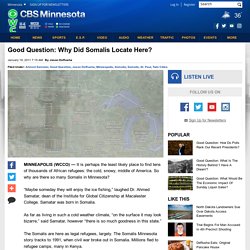 So why are there so many Somalis in Minnesota? “Maybe someday they will enjoy the ice fishing,” laughed Dr. Ahmed Samatar, dean of the Institute for Global Citizenship at Macalester College. Samatar was born in Somalia. As far as living in such a cold weather climate, “on the surface it may look bizarre,” said Samatar, however “there is so much goodness in this state.” Comparing the Somali experience in Minnesota to other immigrant groups. Immigrants have been coming to Minnesota for hundreds of years in search of a new life far away from war and persecution. 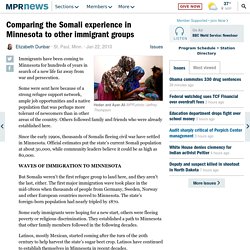 Some were sent here because of a strong refugee support network, ample job opportunities and a native population that was perhaps more tolerant of newcomers than in other areas of the country. Others followed family and friends who were already established here. Since the early 1990s, thousands of Somalis fleeing civil war have settled in Minnesota. Official estimates put the state's current Somali population at about 30,000, while community leaders believe it could be as high as 80,000. But Somalis weren't the first refugee group to land here, and they aren't the last, either. Some early immigrants were hoping for a new start, others were fleeing poverty or religious discrimination. Latinos, mostly Mexican, started coming after the turn of the 20th century to help harvest the state's sugar beet crop. On the other hand, some groups had unique advantages. Success is achievable. Shamso Hashi Photo By: Dymanh Chhoun Interviewing Hashi and hearing her story, I’ve come to understand even better the daunting challenges faced by immigrants – and to appreciate more fully the opportunities I have living in the United States. 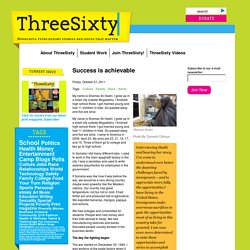 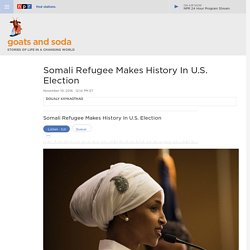 Stephen Maturen /AFP/Getty Images hide caption toggle caption Stephen Maturen /AFP/Getty Images Ilhan Omar, a Democratic candidate for state representative in Minnesota, gives an acceptance speech on election night in Minneapolis. She's a former refugee, a Muslim, a mom of three, and now the first Somali-American lawmaker in the United States. "This really was a victory for that 8-year-old in that refugee camp," Ilhan Omar, 34, said. Omar is the youngest of seven children. "I think I bring the voice of young people," Omar said. She won House District 60B in southeast Minneapolis with 80 percent of the vote. Family of Syrian refugees in Minnesota: 'Coldest states have warmest hearts' ST. 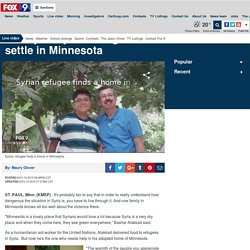 PAUL, Minn. (KMSP) - It's probably fair to say that in order to really understand how dangerous the situation in Syria is, you have to live through it. And one family in Minnesota knows all too well about the violence there. "Minnesota is a lovely place that Syrians would love a lot because Syria is a very dry place and when they come here, they see green everywhere,” Bashar Alakkad said.

As a humanitarian aid worker for the United Nations, Alakkad delivered food to refugees in Syria. "The warmth of the people you appreciate a lot,” Alakkad said. Alakkad, his wife, and their 12-year-old son Tarek left their home in Damascus two months ago because of the rising violence caused by the war between the Assad regime and rebel groups like ISIS. News Story About Refugee Resettlement in the Twin Cities and Arrive Ministries’ Work – Arrive Ministries.

His agency is one of five refugee resettlement agencies in the Twin Cities that helps refugees find homes, jobs and essentials to make it. 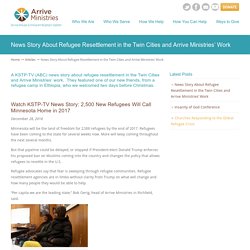 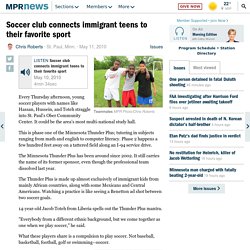 Paul's Ober Community Center. It could be the area's most multi-national study hall. This is phase one of the Minnesota Thunder Plus; tutoring in subjects ranging from math and english to computer literacy. Phase 2 happens a few hundred feet away on a tattered field along an I-94 service drive. The Minnesota Thunder Plus has been around since 2002. The Thunder Plus is made up almost exclusively of immigrant kids from mainly African countries, along with some Mexicans and Central Americans.