Water Wars: Land snatched from Syria supplies third of Israel's H2O. Why world's taps are running dry. If you want to induce mental meltdown, the statistics of the worsening global water crisis are a surefire winner. 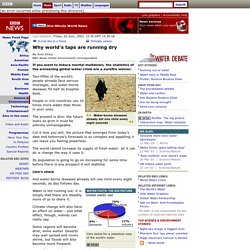 Two-fifths of the world's people already face serious shortages, and water-borne diseases fill half its hospital beds. People in rich countries use 10 times more water than those in poor ones. The present is dire: the future looks so grim it must be entirely unmanageable. Cut it how you will, the picture that emerges from today's data and tomorrow's forecasts is so complex and appalling it can leave you feeling powerless.

The world cannot increase its supply of fresh water: all it can do is change the way it uses it. Its population is going to go on increasing for some time before there is any prospect it will stabilise. Lion's share And water-borne diseases already kill one child every eight seconds, as day follows day. Water is not running out: it is simply that there are steadily more of us to share it. Some regions will become drier, some wetter. And us? Running on empty. China banks on desalination to help ease water woes. 10 June 2013Last updated at 22:58 ET By Celia Hatton BBC News, Beijing In Tianjin, the desalination process produces industrial grade salt It is 11:00 in the village of Nanxinzhuang, in the mountain range just west of Beijing. 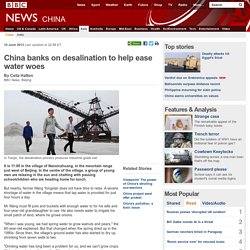 In the centre of the village, a group of young men are relaxing in the sun and chatting with passing schoolchildren who are heading home for lunch. But nearby, farmer Wang Yongxian does not have time to relax. A severe shortage of water in the village means that tap water is provided for just four hours a day. Mr Wang must fill pots and buckets with enough water to for his wife and four-year-old granddaughter to use. "When I was young, we had spring water to grow walnuts and pears," the 60-year-old explained. "Drinking water has long been a problem for us, and we can't grow crops. Parched land. Can desalination plan revive fortunes of Jordan desert? Desalination 'not the solution' Turning salt water into drinking water is not a solution to tackle global water scarcity, the WWF has said. 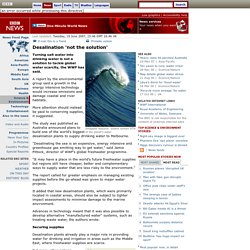 A report by the environmental group said a growth in the energy intensive technology would increase emissions and damage coastal and river habitats. More attention should instead be paid to conserving supplies, it suggested. Bills 'unaffected' by £6m desalination plant upgrade. Gulf region seeks to shake desalination reliance. Obstacles to Arab-Israeli peace: Water. 2 September 2010Last updated at 08:21 By Martin Asser BBC News. 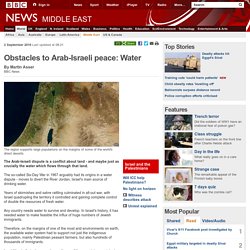 Iraq's PM warns Arab states may face 'water war' 30 May 2012Last updated at 06:26 ET Experts say wasteful water management and desertification are partly to blame for the crisis Arab states could be headed towards a future war over water if they do not act quickly to tackle shortages, Iraqi Prime Minister Nouri Maliki has warned. 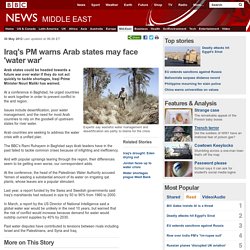 At a conference in Baghdad, he urged countries to work together in order to prevent conflict in the arid region. Issues include desertification, poor water management, and the need for most Arab countries to rely on the goodwill of upstream states for river water. Arab countries are seeking to address the water crisis with a unified plan. The BBC's Rami Ruhayem in Baghdad says Arab leaders have in the past failed to tackle common crises because of infighting and inefficiency.

And with popular uprisings tearing through the region, their differences seem to be getting even worse, our correspondent adds. Why world's taps are running dry. Analysis: Middle East water wars. After signing the 1979 peace treaty with Israel, Egyptian President Anwar Sadat said his nation will never go to war again, except to protect its water resources. 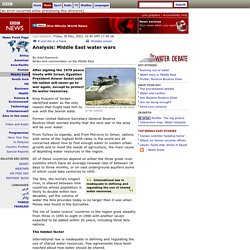 King Hussein of Jordan identified water as the only reason that might lead him to war with the Jewish state. Water wars loom large in Middle East's future. A recent row between Egypt and Ethiopia over Nile water is one example of intensifying conflicts over water (Credit: Khaled Moussa al-Omrani/IPS) By Thomas W Lippman WASHINGTON - The Middle East’s seemingly endless conflicts are diverting attention and resources from a graver long-term threat that looms over the whole region: the growing scarcity of water. 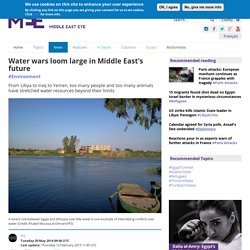 And the situation will get worse before it gets better - if it ever does get better. Years of war, careless water supply management, unchecked population growth, ill-advised agricultural policies, and subsidies that encourage consumption have turned a basically arid part of the world into a voracious consumer of water. Why global water shortages pose threat of terror and war. On 17 January, scientists downloaded fresh data from a pair of Nasa satellites and distributed the findings among the small group of researchers who track the world's water reserves. 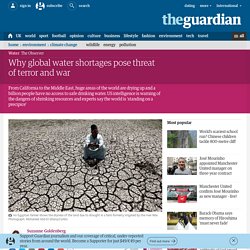 At the University of California, Irvine, hydrologist James Famiglietti looked over the data from the gravity-sensing Grace satellites with a rising sense of dread. The data, released last week, showed California on the verge of an epic drought, with its backup systems of groundwater reserves so run down that the losses could be picked up by satellites orbiting 400km above the Earth's surface.

"It was definitely an 'oh my gosh moment'," Famiglietti said. "The groundwater is our strategic reserve. It's our backup, and so where do you go when the backup is gone? " That same day, the state governor, Jerry Brown, declared a drought emergency and appealed to Californians to cut their water use by 20%. Blue Gold : World Water Wars (Official Full Length Film)