Food - Recipes : Spicy Middle Eastern kofte. Lebanese-style stuffed eggplant. I suspect most of you think it has been pretty quiet around here because we’re crazed, sleep-deprived and wholly consumed with nuzzling squishy baby cheeks and, well, you wouldn’t be completely off-mark, minus the crazed part. 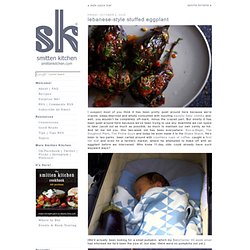 But mostly it has been quiet around here because we’ve been trying to use any downtime we can spare to take Jacob out as much as possible, as much to maintain our own sanity as his. Food52. Author Notes: Recently I became inspired while flipping through the Ottolenghi cookbook. 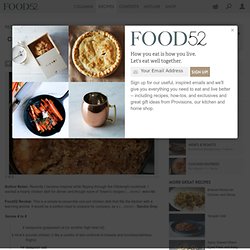 Food - Recipes : Smoked aubergines with garlic (mirza ghasemi) Cider Can Turkey with Nutty Couscous - Dirty Kitchen Secrets. Photography by Sarka Babicka A little over a month ago, Sarka and I collaborated once more, this time to create holiday posts. 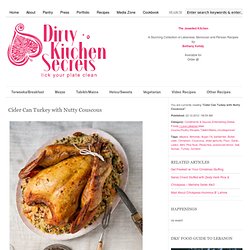 Sarka and her partner Pavel drove down to our home in the West Country, and for a little over a week, we got down to business testing recipes (moi) and photographing dishes (Sarka). The recipes were meant to go up on the blog much sooner than this but alas with everything else that’s been going on, I did not manage it till now. Better late than never! Over the next few days and in the run up to Christmas I will be posting a handful of these holiday recipes. Cider Butt Turkey with Nutty Couscous It’s always best to bring the turkey to room temperature for at least an hour before cooking as this allows it to cook evenly. Serves: 6 Prep time: 20 minutes Cook time: 2 hours and 30 minutes Preheat oven to 220C/425F/7G. Cider Gravy. How to master pasta: Yotam Ottolenghi's pasta recipes. I keep gazing at my shelves of cookbooks, looking for inspiration. 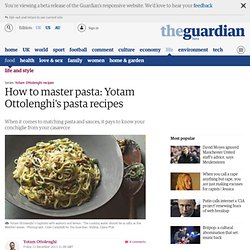 Not for recipe ideas, but for titles. My next book is in the pipeline, and discussions have already begun as to what to call it. It's tough, this naming process: there are so many good titles out there, and you're desperate to come up with something original for your own. Even so, precedent shouldn't be the only guide, as the success of The Geometry Of Pasta (Boxtree, £16.99) shows. The 10 best Middle Eastern recipes.

Jewelled rice (morasa pulao) This has to be the most stunning of Iran's famous range of pulaos, or rice dishes. 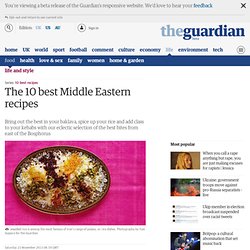 It is the stuff of banquets and weddings – glorious, jewelled, shimmering stripes of fruit and nuts across steaming saffron rice. Streets ahead: Yotam Ottolenghi's pulled pork recipe, plus spice-rubbed rabbit with seared radicchio. Hardly any of my most memorable meals have been eaten in a restaurant, and definitely none in one of those fancy marble-floored, polished-silver establishments. 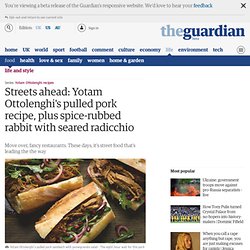 Rather, they've been devoured on grubby pavements, in Asian hawker centres or in simple eateries where people come to get grub day in, day out. Take, say, the kale salad I was handed from the Mei Mei Street Kitchen food truck in Boston earlier this year. Food - Recipes : Pomegranate glazed duck with bulgar, chickpea and pomegranate pilaf.

It's a cracker: Yotam Ottolenghi's recipes for Cretan dakos and a brilliant one-pot chicken dish for winter. I spent part of the summer filming in Crete, but it wasn't all work: the rest of the time I indulged in the local culinary specialities. 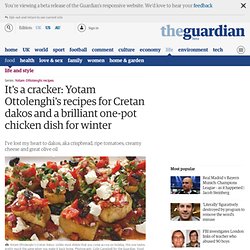 Highlights included the paper-thin bougasta pastries of Heraklion; a stunning fava puree with capers and onions; and xoxli, snails baked with cracked wheat. Much as I loved eating all of these, however, they were as nothing to the not-so-mild obsession I developed for dakos. These oven-dried crispbreads are made with barley, which makes them sweeter, nuttier and more crunchy than their wheat-only counterparts. Spread out on a plate and covered with the finest, ripest chopped tomatoes, good olive oil, some crumbled white cheese and black olives, they are seriously addictive.

(Confusingly, both this dish and the unadorned rusks themselves are called dakos.) So immersed was I in my own consumption of dakos, in fact, that I completely missed the making nearby of the world's largest ever specimen. Lamb Cabbage Rolls Recipe. Step 1 Make filling: Heat oil in a saucepan over medium-high heat. 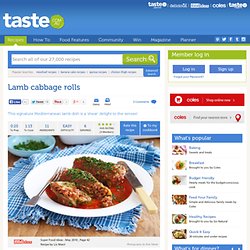 Cook mince, stirring with a wooden spoon to break up mince, for 6 to 8 minutes or until browned. Add onion. Cook for 5 minutes or until onion has softened. Add tomato, rice and 1/2 cup cold water. Bring to the boil. Recipe: Israeli Couscous with Chicken Sausage and Roasted Peppers. New York City chef Marc Murphy is having a big week. 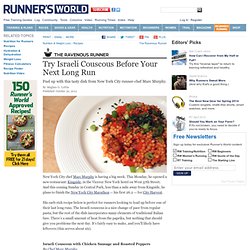 This Monday, he opened a new restaurant: Kingside, in the Viceroy New York hotel on West 57th Street. And this coming Sunday in Central Park, less than a mile away from Kingside, he plans to finish the New York City Marathon — his first 26.2 — for City Harvest. His carb-rich recipe below is perfect for runners looking to load up before one of their last long runs. The Israeli couscous is a nice change of pace from regular pasta, but the rest of the dish incorporates many elements of traditional Italian fare. There's a small amount of heat from the paprika, but nothing that should give you problems the next day. Israeli Couscous with Chicken Sausage and Roasted PeppersBy Chef Marc Murphy How to make it: CouscousIn a large saucepot, bring 6 cups of salted water to a boil.

Chicken SausageIn a medium sauté pan, sauté sausage until browned about 6-8 minutes. Simplest Cinnamon Lamb Stew. It's Passover and Easter this week, so I can't not give you a lamb recipe. 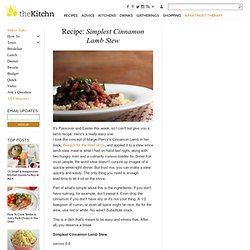 Here's a really easy one. Baked Falafel Recipe - Falafel Recipes. Slow-cooked shoulder of lamb with pomegranate recipe. Food - Recipes : Cholent. Get-togethers: a Persian picnic. What was the occasion? My boyfriend is from southern Italy, and I'm Persian, and we both had family over. Whenever we have guests from a different country, we instantly have a celebration in their honour. Our two food cultures are very similar: we love to share. As in many Mediterranean and Asian cultures, there are always many little dishes and flavours on the table and everything is shared. And there's always enough to feed three times the number of people who are there. What was on the menu? Yotam Ottolenghi's maftoul recipes. Couscous, giant couscous, fregola, mograbiah, maftoul… confused? Don't be. Though they come from different countries and go by different names, they're all variations on the theme of very little (or quite little), round (or pretty much round) balls of pasta.

They are happiest as the support act to soups, stews, salads or sauces, but they are also great served plainly alongside a piece of meat or fish. The one I'd like to champion today is perhaps the least familiar of the bunch, and that's the Palestinian maftoul. Yotam Ottolenghi: codcakes in tomato sauce recipe. A standout recipe from Ottolenghi's most recent cookbook, Jerusalem, which celebrates the rich, many-textured cuisine of his home city, is this deeply satisfying Syrian-Jewish fish dish. Like many of his recipes it takes a while to prepare but the results justify the effort – and it's even tastier the day after. ottolenghi.co.uk. Nigel Slater's turkey couscous recipe. A good way to use up the spare meat from the turkey or goose, this quick, filling recipe also works nicely with chicken. You will need pomegranate molasses, which is available from Middle Eastern grocers and the major supermarkets.

The recipe Pour 2 cups of freshly boiled water from the kettle over a cup of couscous, cover with a lid, then leave to plump up. Chicken Shawarma Recipe. Vegetarian Moussaka - Cold-weather vegetarian food. Return to listing There is 1 oz (25 g) lentils in this recipe, which is a very small amount to cook in one go. So you could cook more and use them the next day for something else. Vegetarians might like to know that a vegetarian parmesan-style cheese is available from Bookhams Serves 1 First of all cook the lentils in 2 fl oz (55 ml) water (no salt added) at a gentle simmer for about 30 minutes or until they are softened and all the water has been absorbed.

Food - Recipes : Red lentil stew with dates and cumin. Hainanese chicken rice recipe, plus Penang acar. I adore recipes that make use of one cut of meat or a whole animal to create a complex dish, loaded with flavour. Herby quinoa, feta & pomegranate salad recipe. Fiery festival falafels with rocket and minty yogurt. Food - Recipes : Red lentil and aubergine moussaka. Vegetarian Moussaka with Ricotta Topping - Vegetarian food. Yes, it is possible to make an extremely good Greek-style moussaka without meat, and even non-vegetarians will admit it tastes every bit as good. Serve it with a large bowl of crunchy salad along with some warm pitta bread. Vegetarian ricotta and a parmesan-style cheese are available from www.bookhamcheese.co.uk.