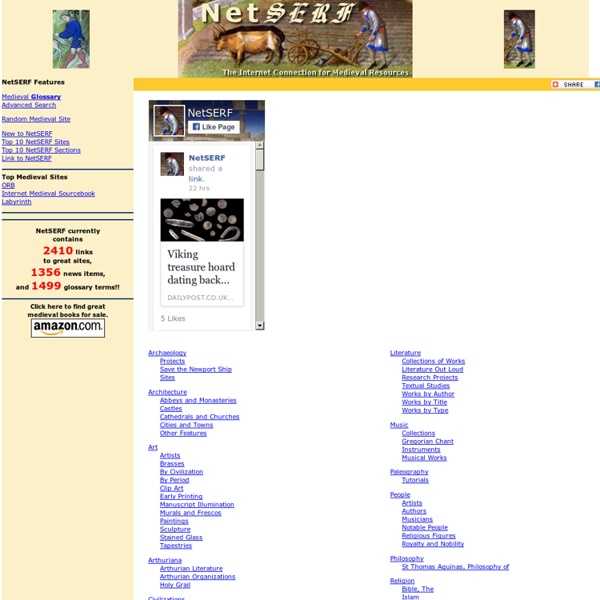 Home Click here to jump straight to the articles: Original Preface. The Catholic Encyclopedia, as its name implies, proposes to give its readers full and authoritative information on the entire cycle of Catholic interests, action and doctrine. What the Church teaches and has taught; what she has done and is still doing for the highest welfare of mankind; her methods, past and present; her struggles, her triumphs, and the achievements of her members, not only for her own immediate benefit, but for the broadening and deepening of all true science, literature and art — all come within the scope of the Catholic Encyclopedia. It differs from the general encyclopedia in omitting facts and information which have no relation to the Church. On the other hand, it is not exclusively a church encyclopedia, nor is it limited to the ecclesiastical sciences and the doings of churchmen.

Middle Ages Updated September 2010 Terms & Glossaries / Timelines / Maps / Feudalism - Daily Life - Carolingian Empire/Charlemagne The Crusades - Heraldry - Chivalry - Knighthood / War, Warfare & Weaponry Important People / Law / Science & Technology / Medieval and Renaissance Fact and Fiction undefined This page is meant to be a guide to resources available on the Web for people who are interested in the history, culture, literature and re-creation of the Middle Ages and Renaissance. There are hundreds of sites on the Middle Ages on the Web.

Maps to be Used for the History of Europe Periodis Web - A Historical Atlas and Gazetteer of Europe from Year 1 to 2000 Europe in Year 2000 Europe in Year 1900 Europe in Year 1800 Europe in Year 1700 Europe in Year 1600 Matenadaran Announcement Calendar In behaviors of our medieval famous bibliographers and workers are especially emphasized also their bibliography activities, which consist of gathering the old journals and creating the new others, combining past spiritual heritage and reviewing their great efforts, that became spiritual heroic lessons for future generations. Mesrop Mashtots (the first creator of the Matenadaran) and our specialists have created many matenadarans from early medieval to the new period of time by branching and connecting in the heart of the centuries. As eternal treasures they confronted to all disasters and led our people as a reasonable light. Like this was created also Mashtots Matenadaran.

The Britannia Lexicon Have you always wanted to travel back in time to the Middle Ages but were hesitant because you didn't speak the language? Presenting the Britannia Lexicon of strange legal, feudal, chivalric, monastic, military and architectural terms to help you understand what those guys back then were really trying to say. In addition, we will soon be including lengthier entries on particular events, wars, movements and organizations, called "Sidebars of History" which will give a more in-depth view of life, politics and religion in medieval Britain. Just click a letter below to begin.