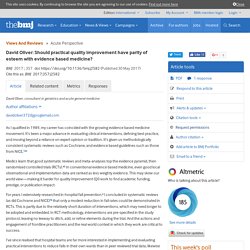 It’s been a major advance in evaluating clinical interventions, defining best practice, and moving beyond a reliance on expert opinion or tradition. It’s given us methodologically consistent systematic reviews such as Cochrane, and evidence based guidelines such as those from NICE.123 Medics learn that good systematic reviews and meta-analyses top the evidence pyramid, then randomised controlled trials (RCTs).45 In conventional evidence based medicine, even good local observational and implementation data are ranked as less weighty evidence. This may skew our world view—making it harder for quality improvement (QI) work to find academic funding, prestige, or publication impact.

That Mitchell and Webb Look: Homeopathic A&E. Contributions of the Framingham Heart Study to the Epidemiology of Coronary Heart Disease. NCCMT - URE - What’s the Risk? Understanding Absolute and Relative Risk Reduction. OpenTrials: what, why and how? We’ve recently published a paper in the journal Trials on something we’re building right now. 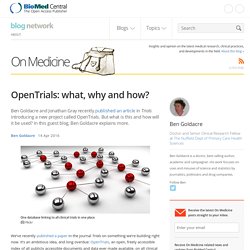 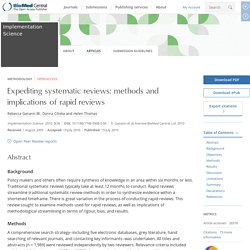 Lehoux et al. conducted a study related to the knowledge and production of health technology assessments and reached similar conclusions [6]. Lehoux et al. acknowledge the need for short reports for policy and decision makers, yet also suggests a need for publishing these rapid reviews within peer-reviewed journals with greater emphasis on describing the methods used. Within this literature review, the majority of references provided examples of rapid reviews, with varying amounts of detail on the methods used. Autism and vaccines: Why telling every side of a scientific story is rarely fair. Scientists and science communicators alike breathed a collective sigh of relief on March 26 when organizers of the upcoming Tribeca Film Festival announced they would pull a controversial documentary, decried for its wholly unscientific claims, from the lineup in the wake of outspoken protest against its screening. 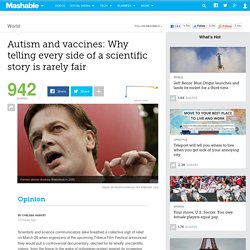 While this is a happy ending to what was nearly a major mistake for the festival, the events raise important questions about what constitutes a truly fair and balanced discourse on an issue. But I’ll back up for a minute. The film in question is called Vaxxed: From Cover-up to Catastrophe, and its trailer suggests that it’s a minefield of anti-vaccine rhetoric, promising the story of a government cover-up aimed at hiding a link between vaccines and autism. This, in and of itself, is enough to incite rage from the scientific community. A retraction and years of controversy. Video: Viva La Evidence. Five Classic Articles in Public Health. Article: Epidemiology - a second rate science? Introduction to basic principles of epidemiology and statistics for tropical disease control. 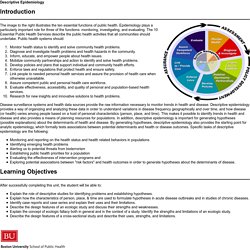 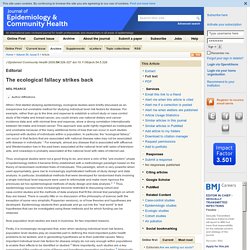 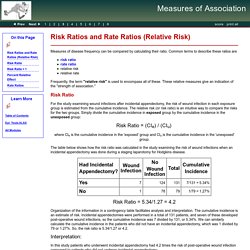 Common terms to describe these ratios are Frequently, the term "relative risk" is used to encompass all of these. These relative measures give an indication of the "strength of association. " Risk Ratio For the study examining wound infections after incidental appendectomy, the risk of wound infection in each exposure group is estimated from the cumulative incidence.

Risk Ratio = (CIe) / (CIu) where CIe is the cumulative incidence in the 'exposed' group and CIu is the cumulative incidence in the 'unexposed' group. The table below shows how the risk ratio was calculated in the study examining the risk of wound infections when an incidental appendectomy was done during a staging laparotomy for Hodgkins disease. Risk Ratio = 5.34/1.27 = 4.2. 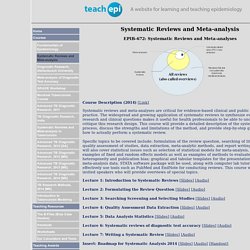 The widespread and growing application of systematic reviews to synthesize evidence on key research and clinical questions makes it useful for health professionals to be able to understand and critique this research design. This course will provide a detailed description of the systematic review process, discuss the strengths and limitations of the method, and provide step-by-step guidance on how to actually perform a systematic review.

Specific topics to be covered include: formulation of the review question, searching of literature, quality assessment of studies, data extraction, meta-analytic methods, and report writing. Lecture 1: Introduction to Systematic Reviews [Slides] [Audio] Lecture 2: Formulating the Review Question [Slides] [Audio] Teaching about Systematic Reviews. Video: what is the NNT and why is it useful? Online learning resource: Epiville, University of Columbia. Cochrane Handbook for Systematic Reviews of Interventions. Opinion: why do myths about autism persist? According to a 2014 National Consumers League poll, 29% of American adults believe that childhood vaccinations can trigger autism. 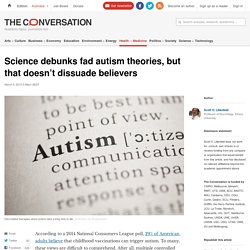 To many, these views are difficult to comprehend. After all, multiple controlled studies conducted on huge international samples have debunked any statistical association between vaccines and autism. Moreover, when the Danish government removed thimerosal – a mercury-bearing preservative that most anti-vaccine advocates regard as the suspect ingredient – from its vaccines in the late 1990s, the rates of autism went up rather than down. Why, then, does the belief persist? Well, it’s not that surprising. Bad science: fake chocolate study exposes poor publication practices. Earlier in the year the world was finally treated to some good news from science: a report was published that claimed to show that eating chocolate could help you lose weight faster. 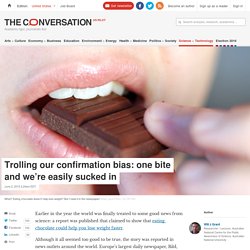 Although it all seemed too good to be true, the story was reported in news outlets around the world. Europe’s largest daily newspaper, Bild, ran it on the front page. It made TV news in Australia and the US, it landed on the Irish Examiner, The Times of India, and the Huffington Post in various languages. But it was too good to be true. Or, if you’re an aficionado of the work of trolls, it was even better. Article: Any set of figures needs adjusting before it can be usefully reported. By Ben Goldacre.

Fox News was excited: "Unplanned children develop more slowly, study finds. " The Telegraph was equally shrill in its headline ("IVF children have bigger vocabulary than unplanned children"). And the British Medical Journal press release drove it all: "Children born after an unwanted pregnancy are slower to develop. " The last two, at least, made a good effort to explain that this effect disappeared when the researchers accounted for social and demographic factors. But was there ever any point in reporting the raw finding, from before this correction was made?

Article:What's wrong with homeopathy? by Ben Goldacre. The following correction was printed in the Guardian's Corrections and clarifications column, Monday December 10 2007 The comment piece below responded in part to an earlier article by Jeanette Winterson: In defence of homeopathy, and referred to her view that there is a role for homeopathy in the treatment of HIV in Africa. Jeanette Winterson has asked us to make clear, in case there is any doubt, that she does not believe that homeopathy can replace anti-retroviral drugs (ARVs) and she does not support homeopaths who make claims that may deter those with HIV from taking ARVs.

There are some aspects of quackery that are harmless - childish even - and there are some that are very serious indeed. Video: John Snow and the cholera outbreak of 1854. Video: cohort and case-control studies explained. Web page: What is a cohort study in medical research? Cohort studies are a type of medical research used to investigate the causes of disease, establishing links between risk factors and health outcomes. Cohort studies are usually forward-looking - that is, they are "prospective" studies, or planned in advance and carried out over a future period of time. Retrospective cohort studies look at data that already exists and tries to identify risk factors for particular conditions; researchers are inherently limited in their interpretations because they cannot retrospectively gather missing data. In a prospective cohort study, researchers first raise a research question, forming a hypothesis about the potential causes of a disease. The researchers then observe a group of people, the cohort, over a period of time (often several years), collecting data that may be relevant to the disease.

This allows the researchers to detect any changes in health in relation to the potential risk factors they have identified. Video: using Odds Ratio in case control studies. Video: introduction to systematic reviews & meta-analyses.