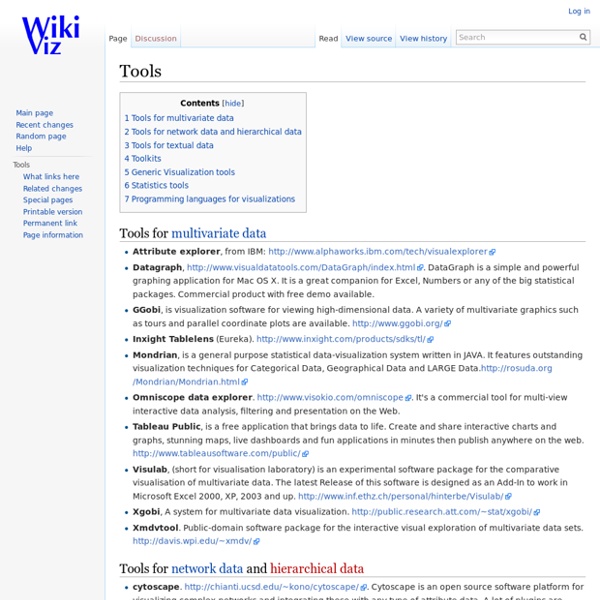 Tools for multivariate data Attribute explorer, from IBM: DataGraph is a simple and powerful graphing application for Mac OS X. It is a great companion for Excel, Numbers or any of the big statistical packages. Commercial product with free demo available.GGobi, is visualization software for viewing high-dimensional data. A variety of multivariate graphics such as tours and parallel coordinate plots are available. Tablelens (Eureka). Tools for network data and hierarchical data cytoscape. Tools for textual data IN-SPIRE. Toolkits A toolkit is a software package that supports the development of several graphical representations. Axiis. Generic Visualization tools Dataplot. Statistics tools S-PLUS. Programming languages for visualizations

The 37 best tools for data visualization It's often said that data is the new world currency, and the web is the exchange bureau through which it's traded. As consumers, we're positively swimming in data; it's everywhere from labels on food packaging design to World Health Organisation reports. As a result, for the designer it's becoming increasingly difficult to present data in a way that stands out from the mass of competing data streams. Get Adobe Creative Cloud One of the best ways to get your message across is to use a visualization to quickly draw attention to the key messages, and by presenting data visually it's also possible to uncover surprising patterns and observations that wouldn't be apparent from looking at stats alone. And nowadays, there's plenty of free graphic design software to help you do just that.

Scraping for Journalism: A Guide for Collecting Data Photo by Dan Nguyen/ProPublica Our Dollars for Docs news application lets readers search pharmaceutical company payments to doctors. We’ve written a series of how-to guides explaining how we collected the data. Most of the techniques are within the ability of the moderately experienced programmer. The most difficult-to-scrape site was actually a previous Adobe Flash incarnation of Eli Lilly’s disclosure site. Lilly has since released their data in PDF format.

The science behind data visualisation Over the last couple of centuries, data visualisation has developed to the point where it is in everyday use across all walks of life. Many recognise it as an effective tool for both storytelling and analysis, overcoming most language and educational barriers. But why is this? How are abstract shapes and colours often able to communicate large amounts of data more effectively than a table of numbers or paragraphs of text? Cleaning data using Google Refine: a quick guide I’ve been focusing so much on blogging the bells and whistles stuff that Google Refine does that I’ve never actually written about its most simple function: cleaning data. So, here’s what it does and how to do it: Download and install Google Refine if you haven’t already done so. It’s free.Run it – it uses your default browser.In the ‘Create a new project’ window click on ‘Choose file‘ and find a spreadsheet you’re working with. If you need a sample dataset with typical ‘dirty data’ problems I’ve created one you can download here.Give it a project name and click ‘Create project‘.

20 free data visualisation tools In this article, I want to focus on tips and tools that are free and easily accessible. There are loads of great paid tools out there, and I use many of them. But it is hard to expect someone just getting into this field to pay for expensive software without actually knowing what they are getting into. This article looks to expand the list to even more tools and resources you can use to help you get started creating beautiful data visualisations for the web and print. From data journalism, where you are scrubbing and combining datasets, to ornately designed infographic style posters, you need to understand the tools and your audience to succeed. This article will point you in the right directions to both improve your skills as well as open your eyes to new resources.

10 Awesome Free Tools To Make Infographics Advertisement Who can resist a colourful, thoughtful venn diagram anyway? In terms of blogging success, infographics are far more likely to be shared than your average blog post. This means more eyeballs on your important information, more people rallying for your cause, more backlinks and more visits to your blog.

Data Visualization: Top 20 Amazing Tools It’s often said that data is the new world currency, and the web is the exchange bureau through which it’s traded. As consumers, we’re positively swimming in data; it’s everywhere from food labels to World Health Organisation reports. As a result, for the designer it’s becoming increasingly difficult to present data in a way that stands out from the mass of competing data streams. MR5RZMKG9XBF Vintage data visualization: 35 examples from before the Digital Era This is a guest post by Tiago Veloso, the founder of Visual Loop, a collaborative digital environment for everything related to information design and data visualization. He lives in Brazil, and you can connect with him online on Twitter and LinkedIn. If you follow us regularly on Visual Loop, you’ve probably noticed we like to featured not only modern interactive visualizations and infographics, but also examples from the past, from the time when there were no computer softwares to help analyzing and designing and no Internet to access and share data. Graphics, charts, diagrams and visual data representations have been published on books, newspapers and magazines since they exist, not to mention old maps and scientific illustrations, and despite the lack of tools such as the ones we have at our disposal nowadays, they are as inspiring and important as the best contemporary visualizations. A Map of Physics (1939)

Treemaps for space-constrained visualization of hierarchies Started Dec. 26th, 1998 by Later updates by Ben Shneiderman and Catherine Plaisant - Last update Sept 2014 Our treemap products: Treemap 4.0: General treemap tool (Free demo version, plus licensing information for full package) PhotoMesa: Zoomable image library browser (Free demo version, plus licensing information for full package) Treemap Algorithms and Algorithm Animations (Open source Java code) A History of Treemap Research at the During 1990, in response to the common problem of a filled hard disk, I became obsessed with the idea of producing a compact visualization of directory tree structures. Concept map An Electricity Concept Map, an example of a concept map A concept map or conceptual diagram is a diagram that depicts suggested relationships between concepts.[1] It is a graphical tool that designers, engineers, technical writers, and others use to organize and structure knowledge. A concept map typically represents ideas and information as boxes or circles, which it connects with labeled arrows in a downward-branching hierarchical structure. The relationship between concepts can be articulated in linking phrases such as causes, requires, or contributes to.[2] Overview[edit]