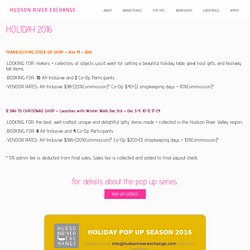 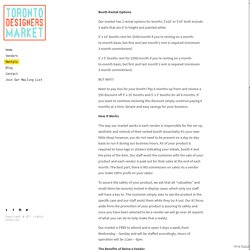 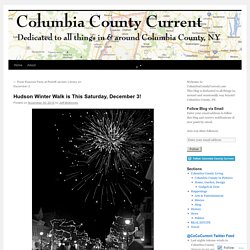 Every year on the first Saturday in December, Hudson’s Warren street becomes a winter wonderland and celebration of the holidays. The street is closed to automobile traffic and becomes a pedestrian promenade. Most of the stores and galleries use Winter Walk to premier their holiday-inspired decorated store front windows, and stay open later than usual. The all-ages festivities including a parade down Warren that culminates in a fireworks show.

This year, which is the 20th Anniversary of Winter Walk, will also include live reindeers, and performers throughout town, including carolers, fire-throwing jugglers, and one saxophone-playing Santa Claus. Hudson Winter Walk is This Saturday, December 3! Unsilent Night. Unsilent Night is an original composition by Phil Kline, written specifically to be heard outdoors in the month of December. 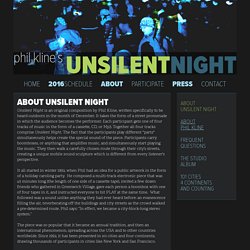 It takes the form of a street promenade in which the audience becomes the performer. Each participant gets one of four tracks of music in the form of a cassette, CD, or Mp3. Together all four tracks comprise Unsilent Night. The fact that the participants play different "parts" simultaneously helps create the special sound of the piece. Participants carry boomboxes, or anything that amplifies music, and simultaneously start playing the music. Unique Markets. FavouriteThings. Pop-up shop. Bake Sale! Exclusive to Members, Staff and Volunteers. ← Back to What's On for Members Holiday joy in each and every bite! 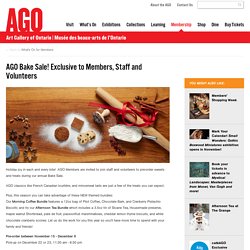 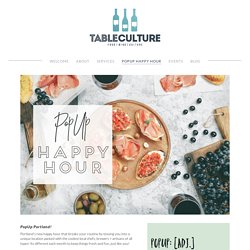 Portland's new happy hour that breaks your routine by tossing you into a unique location packed with the coolest local chefs, brewers + artisans of all types! Its different each month to keep things fresh and fun, just like you! A little more... Music, artisans + a fun setting to hang with old friends + meet new onesTasty bites from chefs rocking food trucks to fine diningFantastic beer, wine + craft cocktails from professional drinkers. There's A Pop-Up Gingerbread Cabin Coming To London! - Secret_LDN. Share on: Wander just a bread crumb trail away from Regents Park and you’ll find the adorable fairy tale-esque Gingerbread cabin brought to you by York & Albany. 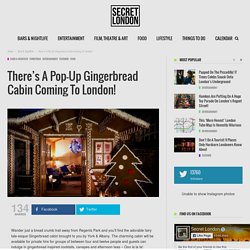 The charming cabin will be available for private hire for groups of between four and twelve people and guests can indulge in gingerbread inspired cocktails, canapes and afternoon teas – Ooo la la la! We’re particularly interested in York & Albany’s team of master mixologists creating delicious temptations such as Grey Goose L’Orange and Amaretto and espresso with a flurry of grated gingerbread, are you feeling fancy yet? The Gingerbread Cabin is open from the 3rd of November until the 28th of February 2017 with limited availability. For more information and to book tickets visit their website. Annabel Usher After recently graduating from a degree in History (something she wishes her student loan would become), Annabel resents people who complain about their commutes between zone 1 & 2, as hers goes beyond the Oyster zone. Travel is the New Shopping: Indie Brand Parachute Launches a Hotel — Design News. The Smartest New Co-Working Spaces Do Double Duty in Libraries and Restaurants.

Instead of devoting square-footage solely to co-working, a handful of organizations are making space do double duty. 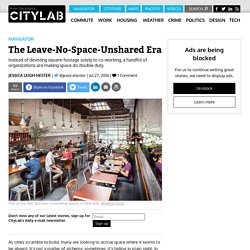 As cities scramble to build, many are looking to accrue space where it seems to be absent. It’s not a matter of alchemy; sometimes, it’s hiding in plain sight. In New York City, some developers have tapped space under the sidewalks, in the form of a submerged, subterranean park; in Hong Kong, Los Angeles, and Baltimore, communities have invigorated the alleys winding behind and across more-trampled thoroughfares, putting them to work as retail hubs and community gathering places.

The common denominator: squeezing utility out of every conceivable square foot. But what if you needed to look no further than a restaurant at off-peak hours? To cater to the habits of a free-range workforce, accelerating the demand for co-working spaces, some cities are looking to make existing spaces more flexible, serving different purposes—for different users—throughout the day. Bulletin. - Smart advice on creative retail. Coworking: An economic development idea for rural America? Mobile tech and the Internet means many knowledge workers can work from anywhere. 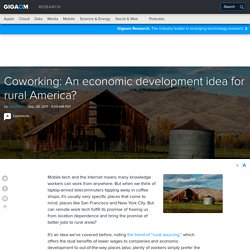 But when we think of laptop-armed telecommuters tapping away in coffee shops, it’s usually very specific places that come to mind, places like San Francisco and New York City. But can remote work tech fulfill its promise of freeing us from location dependence and bring the promise of better jobs to rural areas? It’s an idea we’ve covered before, noting the trend of “rural sourcing,” which offers the dual benefits of lower wages to companies and economic development to out-of-the-way places (also, plenty of workers simply prefer the lifestyle – and lower property prices – of more rural area).

But it’s not just corporate remote employees that are bringing big city work into small towns; co-working spaces are hoping to achieve the same thing for freelancers, startups and small businesses. At least that’s what local Kentucky-focused site KYForward recently suggested. How To Start A Rural Coworking Community. Earlier this week, Shareable featured a post about coworking in rural areas and small cities. 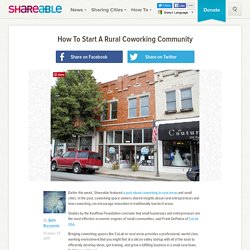 In the post, coworking space owners shared insights about rural entrepreneurs and how coworking can encourage innovation in traditionally low-tech areas. Studies by the Kauffman Foundation conclude that small businesses and entrepreneurs are the most effective economic engines of small communities, said Frank DePalma of CoLab USA. Rural coworking, anyone? A couple years ago, when I was finishing my Ph.D. dissertation, I was a briefly a member of NextSpace, a coworking space in Santa Cruz, CA, one of many now being created in many locations globally (there’s even a coworking space in Mongolia!). NextSpace: 1 Year of Success in an Economic Downturn (abridged) from NextSpace Coworking on Vimeo. Even though I didn’t have much chance to participate in the community, I enjoyed the relaxed, friendly, serendipitous atmosphere, and the busy feeling of people at work. How To Start A Coworking Space in Your Small Town.

Coworking To Create A More Independent Food System. According to a new Oxfam report, the global food system is broken and as a result, we are losing decades of progress against hunger. The report, "Growing A Better Future," outlines the symptoms of today’s broken food system: growing hunger, flat-lining yields, a scramble for fertile land and water and rising food prices. The analysis shows that in the near future, depletion of natural resources and accelerating climate change will make it harder to feed a swelling human population.

To help address this crisis, Oxfam endorses a return to small-scale local farming as a way to provide communities with high quality, affordable food. In urban areas, community farms, balcony gardens and access to Community Supported Agriculture (CSAs) help people regain control of their diet while also bolstering a self-sufficient food system. The FLO movement currently feeds the commons lots of great software and information, but it can also feed the commons amazing local food," said Balkind. Also check out: A Pop-Up Farm Grows In Manhattan [Photos] Thanks to a shaky economy and a high-priced real estate market, New York City has more than 600 stalled construction sites and 596 acres of vacant public land. Rather than let all that prime space go to waste, a restaurant, real estate developer and non-profit collaborated to create one of the City's first pop-up farms.

Instead of dusty potholes and the odd pile of litter, a stalled construction site at 430 East 29th Street now boasts a temporary urban farm. Thanks to the hard work of volunteer farmers, thousands of easily-transportable milk crates serve as planters for 85 different crops grown in the shadow of the Empire State buidling. How To Create A Pop-Up Coworking Space. The sharing economy is a new way of living in which access is valued over ownership, experience is valued over material possessions, and "mine" becomes “ours” so everyone's needs are met without waste. This new paradigm means that spaces and services become more temporary: they "pop-up" to meet a need or facilitate a community, and fade away or change forms when the need has been filled. We've already explored ways that the coworking movement has capitalized on the pop-up concept to introduce mobile professionals to this new style of collaborative work.

Coworking: An economic development idea for rural America? Coworking Provides A Haven For Rural Entrepreneurs. Coworking is a collaborative style of work in which mobile professionals share a common space as well as ideas. Perfectly suited to the location-independent lifestyles of graphic designers, software developers, writers, coworking has taken many of the "laptop professions" by storm, and grown rapidly in almost every major city of the United States. It makes sense that major cities and metropolitan areas would be hubs of technological innovation.

The Tobacco Factory. The Tobacco Factory building is one of the few survivors from the great Imperial Tobacco site on Raleigh Road, Ashton, Bristol. It was saved from demolition by Bristol architect George Ferguson who has turned it into a model of urban regeneration. It is now a multi use building housing the Cafe Bar, Thali Cafe, creative industry work space, live/work loft apartments, animation and performing arts schools and one of the most exciting theatre venues in the country.