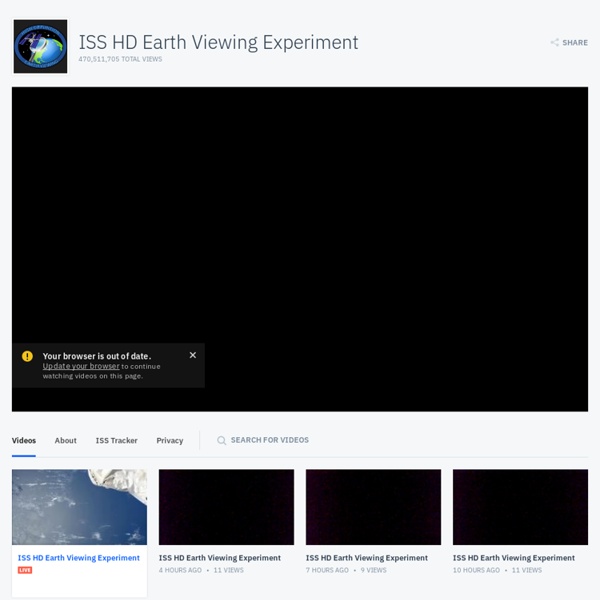 Black Image = International Space Station (ISS) is on the night side of the Earth. No Audio = Normal. There is no audio by design. Add your own soundtrack. For a display of the real time ISS location plus the HDEV imagery, visit here: The High Definition Earth Viewing (HDEV) experiment aboard the ISS was activated April 30, 2014. Analysis of this experiment will be conducted to assess the effects of the space environment on the equipment and video quality which may help decisions about cameras for future missions.

Why Have We Still Never Seen a Black Hole? But that's exactly what astronomers working on the Event Horizon Telescope say they've already done; it's just a matter of compiling the data and using special algorithms to translate it into a clear picture. Soon, we should have preliminary images that show the size, shape, and surrounding environment of our local supermassive black hole. It won't technically be the "hole" itself, but like a shadow on the wall, it should tell us a lot of what we need to know. Get stories like this one in your inbox each morning. Sign up for our daily email here.

The Gateway to Astronaut Photography of Earth Formerly the site for the High Definition Earth-Viewing System (HDEV) : Operational: April 30, 2014 – End of Life: August 22, 2019. See more information below. Currently, live video of Earth is streaming from an external HD camera mounted on the ISS. The camera is looking toward Earth with an occasional solar panel passing through the view. Building an ISS Pointer Tracker using Adafruit HUZZAH ESP8266 Overview – Part 1 Alt/Az Pointer Expanding on my Stepper Motor controller using Adafruit Huzzah ESP8266 WiFi module by adding a small Servo, I created a mechanical device that can move in Azimuth (using a Stepper) and Altitude (using a Servo). This makes for a compact and low-cost remotely controlled celestial pointer. In this case, it can be used to point at the International Space Station (ISS) as it flies overhead.

A hidden population of exotic neutron stars Magnetars — the dense remains of dead stars that erupt sporadically with bursts of high-energy radiation — are some of the most extreme objects known in the universe. A major campaign using NASA’s Chandra X-ray Observatory and several other satellites shows magnetars may be more diverse — and common — than previously thought. When a massive star runs out of fuel, its core collapses to form a neutron star, an ultradense object about 10 to 15 miles (16 to 24 kilometers) wide.

How to See the Ursids, the Last Meteor Shower of the Year The Ursids are a bit more exciting than their parent comet. After all, any meteor shower means that shards of space junk are hitting the Earth's atmosphere at top speed and bursting into flames — pretty metal! Still, this shower is hardly as bear-like as its name suggests. It's pretty low-key compared to, say, the Perseids. Still, don't underestimate the Ursids: Twice, the shower has had bursts of 100 meteors in an hour. First Direct Evidence of Cosmic Inflation Almost 14 billion years ago, the universe we inhabit burst into existence in an extraordinary event that initiated the Big Bang. In the first fleeting fraction of a second, the universe expanded exponentially, stretching far beyond the view of our best telescopes. All this, of course, was just theory. Researchers from the BICEP2 collaboration today announced the first direct evidence for this cosmic inflation.

ISS Interactive 3D Visualization This is our new 3D visualization of the ISS, please see below for instructions on how to use it, a list of features, and tips in case it does not display on your browser. Usage instructions: Drag the viewpoint with the mouse whilst holding down the left button. Zoom in and out from the ISS using the mouse wheel. Use the button at the bottom right of the display to enter fullscreen mode. Features:

This Newly Discovered Super-Earth Might Be Our Second-Closest Exoplanet While this discovery still needs confirmation, the team is pretty sure it's a done deal. "After a very careful analysis, we are 99% confident that the planet is there," said Ignasi Ribas, the team's lead scientist from the Institute of Space Studies of Catalonia and the Institute of Space Sciences, CSIC in Spain, said in a statement. "However, we'll continue to observe this fast-moving star to exclude possible, but improbable, natural variations of the stellar brightness which could masquerade as a planet."

Typhoon Haiyan as seen from space: The best images from the web Devastating, powerful and deadly, typhoons can cause unimaginable destruction. For those of us lucky enough to be outside their path, they are also one of mother nature’s most magnificent spectacles, often best viewed from above. Here are our favourite satellite images of Typhoon Haiyan (Yolanda), the biggest typhoon ever recorded, from our news sources and around the web. If you want to catch up on the latest Typhoon Haiyan developments you can find our latest report here.