Science Notebooking, Teaching, and Technology: How to Make - Wind Vane. PlanetQuest - The Search for Another Earth. 30th anniversary of Challenger disaster remembered in new documentary. Ask anyone else where they were on Jan. 28, 1986 when the Challenger exploded 73 seconds into flight and they'll likely know. 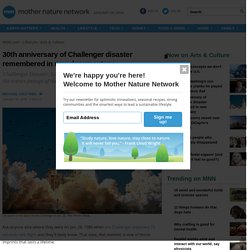 That date, that moment, is one of those imprints that lasts a lifetime. I was in second grade, and I'd just returned from lunch when my teacher said there was a special announcement. Spectra of Gas Discharges. 26 Pictures Will Make You Re-Evaluate Your Entire Existence. Planetarium Software. Redshift 7 Premium is a comprehensive guide to the heavens. 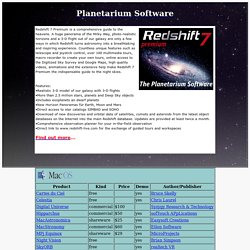 A huge panorama of the Milky Way, photo-realistic horizons and a 3-D flight out of our galaxy are only a few ways in which Redshift turns astronomy into a breathtaking and inspiring experience. Countless unique features such as telescope and joystick control, over 100 multimedia tours, macro recorder to create your own tours, online access to the Digitized Sky Survey and Google Maps, high quality videos, animations and the extensive help make Redshift 7 Premium the indispensable guide to the night skies. Features: •Realistic 3-D model of our galaxy with 3-D flights •More than 2.5 million stars, planets and Deep Sky objects •Includes exoplanets an dwarf planets •New Horizon Panoramas für Earth, Moon and Mars •Direct access to star catalogs SIMBAD and SOHO •Download of new discoveries and orbital data of satellites, comets and asteroids from the latest object databases on the Internet into the main Redshift database. How Do Astronomers Name Celestial Objects? There are thousands upon thousands of celestial objects, discovered by hundreds of different individuals over the course of centuries. 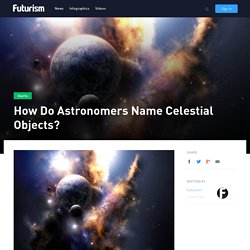 While many of them have easy to remember names—like the Orion Nebula, the Lagoon Nebula, the Butterfly Nebula and the Hourglass Nebula—most have designations that are anything but. Moreover, the memorable names aren’t always recognized by the International Astronomical Union (IAU): the organization with the sole authority to give names to celestial bodies. Even they tend to go with names that are mixtures of seemingly random characters, which aren’t really random at all. In astronomy, names aren’t just for reference. Rather, each designation is meant to convey important information about the object itself, and more often than not, objects are appointed with more than one name.

The round worlds of the solar system. Learn more. A fake and a real view of the solar eclipse... FROM SPACE! - Bad Astronomy. [First: CONGRATS to SpaceX for the successful launch of the Falcon 9 and deployment of the Dragon capsule! 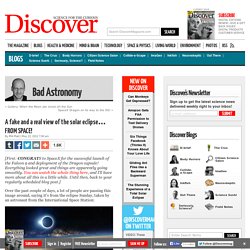 Everything looked great and things are apparently going smoothly. You can watch the whole thing here, and I’ll have more about all this in a little while. Until then, back to your regularly scheduled blog post.] Over the past couple of days, a lot of people are passing this image around, saying it’s from the eclipse Sunday, taken by an astronaut from the International Space Station: IYA 2009. Experience Join the international celebration with these easy-to-use monthly guides. 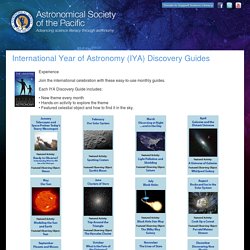 Each IYA Discovery Guide includes: • New theme every month • Hands-on activity to explore the theme • Featured celestial object and how to find it in the sky. Worldwide sunrise, sunset, moonrise and moonset times for 2015 and 2016. Cosmic_Calendar-wikimedia commons. To Scale: The Solar System. If the Moon Were Only 1 Pixel - A tediously accurate map of the solar system. Mercury Venus Earth You Are Here Moon Mars Jupiter Io Europa. 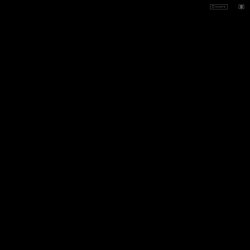 What's a Planet? There's a Test (and Pluto Flunked it) Nine years ago, the International Astronomical Union established new criteria for determining what classifies as a “planet,” a controversial move that officially (but not in spirit) stripped Pluto’s status as the solar system’s ninth planet. 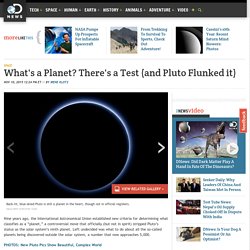 Left undecided was what to do about all the so-called planets being discovered outside the solar system, a number that now approaches 5,000. PHOTOS: New Pluto Pics Show Beautiful, Complex World On Tuesday, astronomer Jean-Luc Margot, with the University of California Los Angeles, unveiled what he describes as a simple “planet test.” Using space in education. Where is Earth's water? The USGS Water Science School. 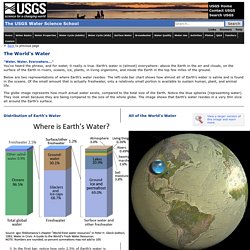 What's shakin. An earthquake is a sudden release of stored energy. 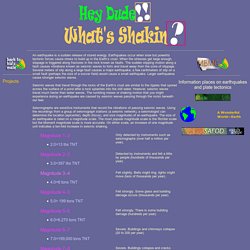 Earthquakes occur when slow but powerful tectonic forces cause stress to build up in the Earth’s crust. When the stresses get large enough, slippage is triggered along fractures in the rock known as faults. The sudden slipping motion along a fault causes vibrations known as seismic waves to form and travel away from the zone of slippage. Measure Distance on a Map. The measure distance tool is a simple way of find the distance between two points on a map. 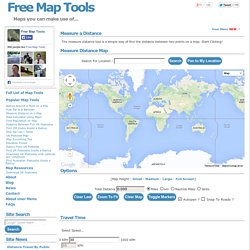 Start Clicking! Select Speed... Or choose mode of transport... How to use the Measure Distance Tool Simply click once on one point, then click again on the second point. The Language of Maps Kids Should Know. Though in the age of iPhones and GPSs we seem to be losing paper maps, I still love exploring maps, and believe kids need to learn map skills, and develop their geography awareness. Because of this I have many activities on Kid World Citizen to help parents and teachers teach children about maps. Kids not only can learn to read them, but to recognize their components and build their own maps. I was recently asked for a list of vocabulary or concepts of maps kids should learn. The Dynamic Earth @ National Museum of Natural History.