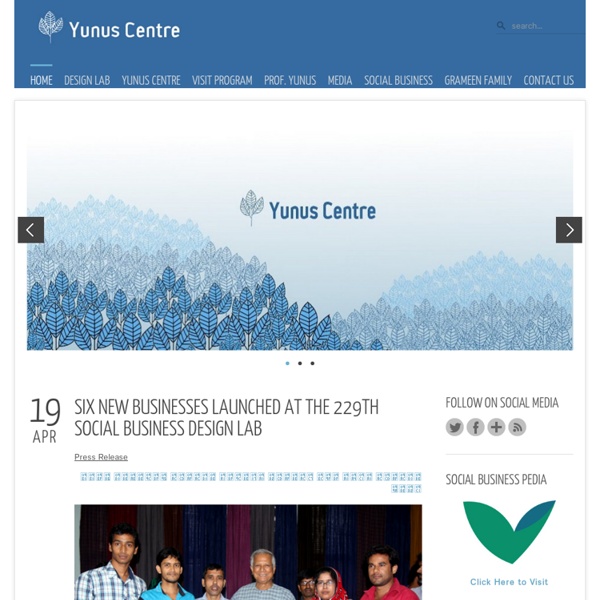 Time Management Techniques Adopting good time management techniques is really important especially when starting your own online business. Trying to juggle a million balls in the air, learning new skills and getting your business off the ground can run you ragged. Learning how to manage time is a process. Bake Bread Without an Oven: 12 Ways! - The Bread Geek If you think you need an oven to bake bread, think again! If you have heat, you can eat. Recognizing this simple fact can open up a world of possibilities for sustainable living and emergency preparation. Beyond that, learning to bake bread without an oven can be a lifesaver in hot climates when the idea of turning on the oven makes your sweat rings break out in a sweat. Here are a few great reasons to learn to consider these 12 ways to bake bread without an oven: Flexibility: Expand your options!

Sir Richard Branson’s real impact - Thomas Kostigen's Impact Investor By Thomas Kostigen CANCUN, Mexico (MarketWatch) — I was swimming alongside a massive shark in the open waters here, 35 miles off the coast. And I have Sir Richard Branson to thank for it. Swimming with the sharks was planned. The Original Solar Oven & Solar Cooker Cook, Bake, Dehydrate or Boil with the World’s Most Universal Power Source… Free Sunshine! Reaches Temperatures of 360 to 400 Degrees Fahrenheit! Bake, Boil or Steam Foods — Boil or Pasteurize Water! The most energy-efficient way to re-hydrate freeze-dried emergency preparedness foods.

michael porter's five forces competition theory model home » business/selling » porter's five forces model Michael E Porter's five forces of competitive position model and diagrams Michael Porter's famous Five Forces of Competitive Position model provides a simple perspective for assessing and analysing the competitive strength and position of a corporation or business organization. A free Five Forces diagram in MSWord is available here. 3 Ways To Make Bread When The Power Is Out Early on in my survival preparations, I bought lots of whole wheat flour and yeast packets for making bread. Flour is a lot cheaper than MRE’s and it takes up less space. Then one day my wife said, “If a disaster happens and the power is out, how are you going to bake bread?” Good question. And I felt pretty stupid because I didn’t have an answer.

World's 10 top management gurus Discuss | Get latest news on your desktop World's 10 top management gurus August 6, 2008 For long the worlds richest man, till he was upstaged by legendary investor Warren Buffett recently, Bill Gates wears many a hat: computer whiz kid, entrepreneur extraordinaire, compassionate capitalist, top management thinker. . . Born on October 28, 1955, William H Gates III grew up in Seattle with his two sisters. Their father, William H Gates II, is a Seattle attorney. Pot-in-pot refrigerator A pot-in-pot refrigerator, clay pot cooler[1] or zeer (Arabic: زير‎) is an evaporative cooling refrigeration device which does not use electricity. It uses a porous outer earthenware pot, lined with wet sand, contains an inner pot (which can be glazed to prevent penetration by the liquid) within which the food is placed - the evaporation of the outer liquid draws heat from the inner pot. The device can be used to cool any substance. This simple technology requires only a flow of relatively dry air and a source of water. History[edit] There is some evidence that evaporative cooling was used as early as the Old Kingdom of Egypt, around 2500 B.C.

List of Different Types of Management Styles Management styles are concepts and theories, that influence the general work environment of an organization. Management styles can vary a bit with a change in leadership; however, the crux of management remains the same. Through the years, economists and business gurus have fostered and developed several management styles, each surfacing from a different school of thought. However, they all have the same bottom line - profit. They may follow different routes, but are headed to the same destination - good business!

Top 7 Things You Need for Sheltering in Place In most disaster scenarios, the best place for you to be is at home. That’s where the bulk of your supplies are located. You’re familiar with the area. The fact is, that’s just where you’ll be the most comfortable. Stress reduction is extremely important during a crisis and anything you can do to put your mind, and the minds of your family members, at ease is desirable.

Vidéo MIT - Ending Global Poverty Muhammad Yunus, Founder and Managing Director, Grameen Bank; 2006 Nobel Peace Prize Laureate; Ambassador for the Joint United Nations Program on HIV/AIDS Imagine a bank that loans money based on a borrower's desperate circumstances -- where, as Muhammad Yunus says, "the less you have, the higher priority you have." Turning banking convention on its head has accomplished a world of good for millions of impoverished Bangladeshis, as the pioneering economist Yunus has demonstrated in the last three decades. What began as a modest academic experiment has become a personal crusade to end poverty. Yunus reminds us that for two-thirds of the world's population, "financial institutions do not exist." Yet, "we've created a world which goes around with money.