"Racisme is niet te bestrijden met feiten alleen" What I Lost And The Importance Of Being Connected. The concept of different “learning styles” is one of the greatest neuroscience myths — Quartz. Are you a visual learner who writes notes in a rainbow of different colors, or do you have to read something aloud before it will sink it? 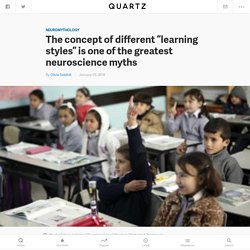 Chances are, you’ve been asked a similar question at some point in your life, and believe the concept of different “learning styles” is perfectly valid. But, as Quartz reported in December, we all learn in fundamentally similar ways. And, as New York magazine reports, the idea that students learn differently depending on their personal preference for visual, auditory or kinesthetic cues is just a myth. In fact, it’s considered a “neuromyth,” which, as Paul Howard-Jones, professor of neuroscience and education at Bristol University, writes in a 2014 paper on the subject, is characterized by a misunderstanding, misreading, or misquoting of scientifically established facts. Other examples of neuromyths include that we only use 10% of our brain, and that drinking less than six to eight glasses of water a day will cause the brain to shrink. Yes, the election polls were wrong. Here's why. The polls were wrong. 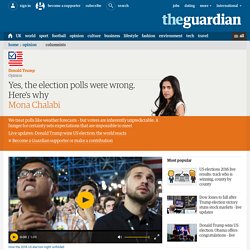 And because we are obsessed with predicting opinions rather than listening to them, we didn’t see it coming. So, the world woke up believing that Republican candidate Donald Trump had a 15% chance of winning based on polling predictions – roughly the same chance of rolling a total of six if you have two dice. Despite those odds, the next US president will be Donald Trump. I have a few ideas about what went wrong. In the four years I’ve spent as a data journalist, I’ve been concerned by how much faith the public has placed in polling. But those are two very different kinds of forecasts. That’s not new information. I spent almost two years working for Nate Silver’s website FiveThirtyEight, where I hoped to learn the secrets of political forecasting. Stapel New York Times.

A well-known psychologist in the Netherlands whose work has been published widely in professional journals falsified data and made up entire experiments, an investigating committee has found. 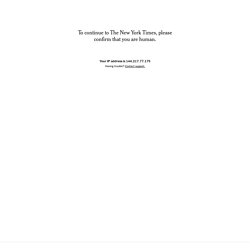 Experts say the case exposes deep flaws in the way science is done in a field, , that has only recently earned a fragile respectability. The psychologist, Diederik Stapel, of Tilburg University, committed academic fraud in “several dozen” published papers, many accepted in respected journals and reported in the news media, according to a report released on Monday by the three Dutch institutions where he has worked: the University of Groningen, the University of Amsterdam, and Tilburg. The journal Science, which published one of Dr. Stapel’s papers in April, posted an “editorial expression of concern” about the research online on Tuesday. 12 Theories of How We Became Human, and Why They’re All Wrong. What a piece of work is man! 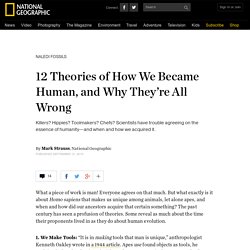 Everyone agrees on that much. But what exactly is it about Homo sapiens that makes us unique among animals, let alone apes, and when and how did our ancestors acquire that certain something? The past century has seen a profusion of theories. Some reveal as much about the time their proponents lived in as they do about human evolution. 1. 2. 3. 4. 5. 6. 7. Researchers overturn landmark study on the replicability of psychological science. According to two Harvard professors and their collaborators, a 2015 landmark study showing that more than half of all psychology studies cannot be replicated is actually wrong. 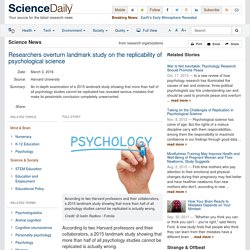 In an attempt to determine the replicability of psychological science, a consortium of 270 scientists known as The Open Science Collaboration (OSC) tried to replicate the results of 100 published studies. More than half of them failed, creating sensational headlines worldwide about the "replication crisis" in psychology. But an in-depth examination of the data by Daniel Gilbert (Edgar Pierce Professor of Psychology at Harvard University), Gary King (Albert J. Weatherhead III University Professor at Harvard University), Stephen Pettigrew (doctoral student in the Department of Government at Harvard University), and Timothy Wilson (Sherrell J. Aston Professor of Psychology at the University of Virginia) has revealed that the OSC made some serious mistakes that make this pessimistic conclusion completely unwarranted: