[MUSLIM HERITAGE2007] Precious Records of Eclipses in Muslim Astronomy and History. 28 August 2007 Lunar Eclipse A total eclipse of the Moon occurs during the early morning of Tuesday, August 28, 2007. 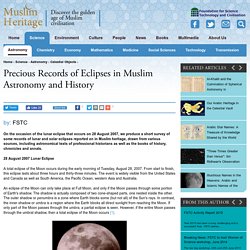 From start to finish, this eclipse lasts about three hours and thirty-three minutes. The event is widely visible from the United States and Canada as well as South America, the Pacific Ocean, western Asia and Australia. An eclipse of the Moon can only take place at Full Moon, and only if the Moon passes through some portion of Earth's shadow. The shadow is actually composed of two cone-shaped parts, one nested inside the other. Observations of eclipses in Islamic astronomy A total eclipse is a spectacular sight.

Abu al-Rayhan al-Biruni (d. 1048), the famous scientist who excelled in mathematical and applied astronomy, did not fail naturally to observe eclipses and to study them. "The faculty of sight cannot resist it [the Sun's rays], which can inflict a painful injury. "This lunar eclipse was on 10 Shawwal 370 H [22 April 981 CE]. "(453 H.) The Astrolabe. [NATURE2006] Islam et science moderne. [NATURE2006] Islamic era science: Interactive timeline. C.865- c.926 Al-Razi (Rhazes) c.865- c.926 Al-Razi (Rhazes)Persian who contributed to medicine, alchemy and philosophy. 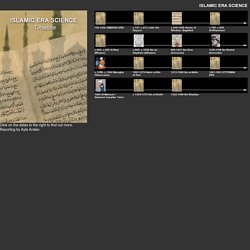 He formulated the first known description of smallpox, which the Ancient Greeks had confused with measles. C.965- c.1039 Ibn al- Haytham (Alhazen) c.965- c.1039 Ibn al- Haytham (Alhazen)Basra-born researcher in astronomy, mathematics and optics who helped to develop the camera obscura. He refuted Greek models of vision, arguing instead that vision is the result of images being formed, and provided better descriptions of the eye.

Credit for this image: Science Museum. Science & Society Picture Library 980-1037 Ibn Sina (Avicenna) 980-1037 Ibn Sina (Avicenna)Persian physician and philosopher from Bukhara. [TSCHANZ2016] The Islamic Roots of Modern Pharmacy (AramcoWorld) The professional who is specialized in the collection of all drugs, choosing the very best of each simple or compound, and in the preparation of good remedies from them following the most accurate methods and techniques as recommended by experts in the healing arts. 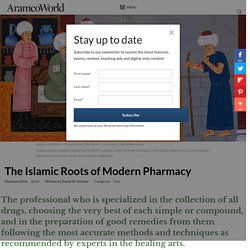 --Abu al-Rayan al-Biruni, c. 1045 CE Al-Biruni’s definition of the pharmacist could have been written today. Along the road from sympathetic magic and shamanism to scientific method, much trailblazing was carried out over a few centuries by scholars, alchemists, physicians and polymaths of the Muslim Middle East, and their rules, procedures and expectations are, to a great extent, practiced almost universally today. “In the West and the Middle East, early medicine as a whole was primarily a fusion of Greek, Indian, Persian and later Roman practices that had progressed over the better part of a millennium.

“By mid-century, the rise of Islam brought with it a new thirst for knowledge. [Saudi Aramco World 2007] Rediscovering Arabic Science. Written by Richard Covington ou have to hand it to Ahmed Djebbar: The science historian certainly knows how to draw a crowd. 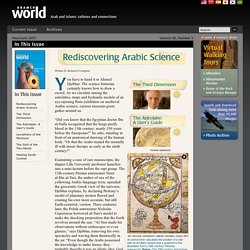 As we circulate among the astrolabes, maps and hydraulic models of an eye-opening Paris exhibition on medieval Arabic science, curious museum-goers gather around us. “Did you know that the Egyptian doctor Ibn al-Nafis recognized that the lungs purify blood in the 13th century, nearly 350 years before the Europeans?” He asks, standing in front of an anatomical drawing of the human body. “Or that the Arabs treated the mentally ill with music therapy as early as the ninth century?” Examining a case of rare manuscripts, the dapper Lille University professor launches into a mini-lecture before the rapt group. How 1,000 years of Arabic scholarship advanced scientific debate – in pictures. [Yves Gingras2008] Ernest Renan, Al-Afghani, l'islam et les sciences.