Croke Park - History - BBC. Politics and Irish language revival - Douglas Hyde and the Gaelic League. Gaelic Revival. Gaelic league quote. Blog: Gaelic Revival. The success of the G.A.A. can be attributed, in part, to the strong political element and affinity of Irish nationalism. 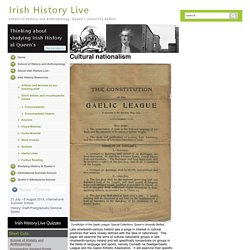 Indeed, the G.A.A. was even described as ‘a political organisation ... in which athletics played only a minor role’.[14] This, however, may be deemed a somewhat unfair representation, given that it was extremely popular as a sporting spectacle. Garnham has argued that in the past, the G.A.A. had been reluctant to permit scholars to study its records and this in turn resulted in an overreliance on records from the Royal Irish Constabulary (R.I.C.).

These sources may have presented the association as a highly politicised and potentially seditious organisation.[15] This R.I.C. viewpoint may be understandable in the context of the infamous ‘ban’ that barred Crown forces from taking part in the organisation. The extent to which the organisation was a vehicle for spreading nationalism can be seen by the militant anti-British elements that made up the membership. Conclusion. Yeats & the Irish Literary Revival. W.B. 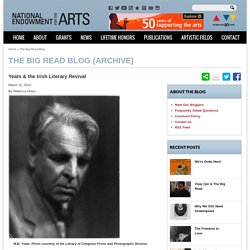 Yeats. Photo courtesy of the Library of Congress Prints and Photographs Division Since we’re just a few days from St. Patrick’s Day, we thought we’d celebrate with a brief look at Ireland’s most famous poet, William Butler Yeats, and his role in the Irish Literary Revival. Although no historical context is needed to appreciate Yeats’s beautiful verse, understanding the impact his words once held make his poems all the more powerful. Irish literary renaissance. Irish literary renaissance, flowering of Irish literary talent at the end of the 19th and the beginning of the 20th century that was closely allied with a strong political nationalism and a revival of interest in Ireland’s Gaelic literary heritage. 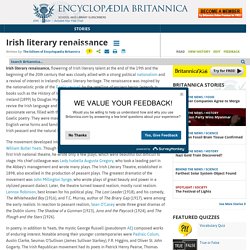 The renaissance was inspired by the nationalistic pride of the Gaelic revival; by the retelling of ancient heroic legends in books such as the History of Ireland (1880) by Standish O’Grady and A Literary History of Ireland (1899) by Douglas Hyde; and by the Gaelic League, which was formed in 1893 to revive the Irish language and culture. GAA. Published in 18th–19th - Century History, Irish Republican Brotherhood / Fenians, Issue 2(March/April 2011), Reviews, The Act of Union, Volume 19 Dr Thomas W. 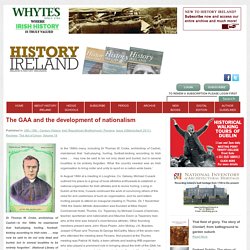 In August 1884 at a meeting in Loughrea, Co. . (1) to bring about the organisation of Irish sport by Irish men; (2) to draft new rules for Irish games; (3) to devise schemes of recreation for Irish people. The Foundation of the Gaelic Athletic Association. The inaugural meeting of the GAA was not an extravagant event by any means. 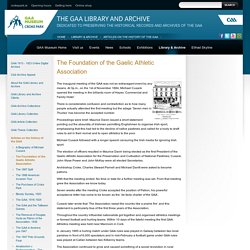 At 3p.m., on the 1st of November 1884, Michael Cusack opened the meeting in the billiards room of Hayes ‘Commercial and Family Hotel’. There is considerable confusion and contradiction as to how many people actually attended the first meeting but the adage ‘Seven men in Thurles’ has become the accepted number. Proceedings were brief. Maurice Davin issued a short statement pointing out the absurdity of Irishmen permitting Englishmen to organise Irish sport, emphasising that this had led to the decline of native pastimes and called for a body to draft rules to aid in their revival and to open athletics to the poor.