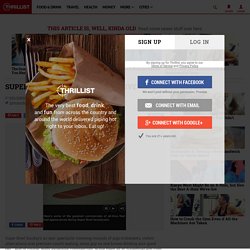 And of course, really expensive commercials: re-live them all at SuperBowl-Ads.com SBA's a storehouse of ads from Super Bowls past -- hundreds of 30-second breaks from the most popular sporting event to ever distract you from the Bud Bowl. The bulk are from '98-'07, everything from perv-fare (Miller Lite catfight), to did-that-guy-play-in-NFL-Europa? Fare (Terry Tate: Office Linebacker), to swan songs (Robert Goulet's Emerald Nuts), to hazy memories of defunct dot-coms (Lifeminders.com, OurBeginning.com -- which tanked after blowing $2.1mil on a spot about weddings.

Weddings!). Our best stories, delivered daily The best decision you'll make all day. Remember how detestable those Budweiser frogs were at SuperBowl-Ads.com. Remembering Apple's "1984" Super Bowl ad. Today marks the 30th anniversary of Apple's famous "1984" television ad that aired on January 22, 1984, during the third quarter of the Super Bowl XVIII between the Los Angeles Raiders and Washington Redskins. 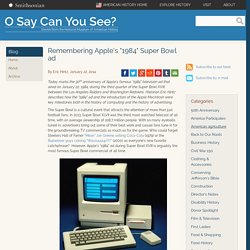 Historian Eric Hintz describes how the "1984" ad and the introduction of the Apple Macintosh were key milestones both in the history of computing and the history of advertising. The Super Bowl is a cultural event that attracts the attention of more than just football fans. In 2013, Super Bowl XLVII was the third most watched telecast of all time, with an average viewership of 108.7 million people. With so many eyeballs tuned in, advertisers bring out some of their best work and casual fans tune in for the groundbreaking TV commercials as much as for the game. 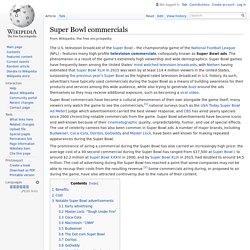 The phenomenon is a result of the game's extremely high viewership and wide demographics: Super Bowl games have frequently been among the United States' most watched television broadcasts, with Nielsen having estimated that Super Bowl XLIX in 2015 was seen by at least 114.4 million viewers in the United States, surpassing the previous year's Super Bowl as the highest-rated television broadcast in U.S. history. As such, advertisers have typically used commercials during the Super Bowl as a means of building awareness for their products and services among this wide audience, while also trying to generate buzz around the ads themselves so they may receive additional exposure, such as becoming a viral video. 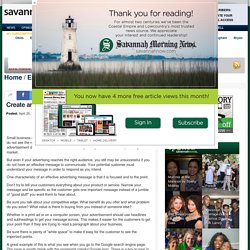 There are a variety of reasons why an advertisement doesn't work, such as not selecting the right media to reach your target market. But even if your advertising reaches the right audience, you still may be unsuccessful if you do not have an effective message to communicate. Your potential customer must understand your message in order to respond as you intend. One characteristic of an effective advertising message is that it is focused and to the point. Don't try to tell your customers everything about your product or service. Be sure you talk about your competitive edge. Whether in a print ad or on a computer screen, your advertisement should use headlines and subheadings to get your message across. Be sure there is plenty of "white space" to make it easy for the customer to see the important points. This is Google, and this is what they do. Don't be boring. This Ad Has a Secret Anti-Abuse Message That Only Kids Can See. Best Environmental Ads - Powerful Environmental Ads.