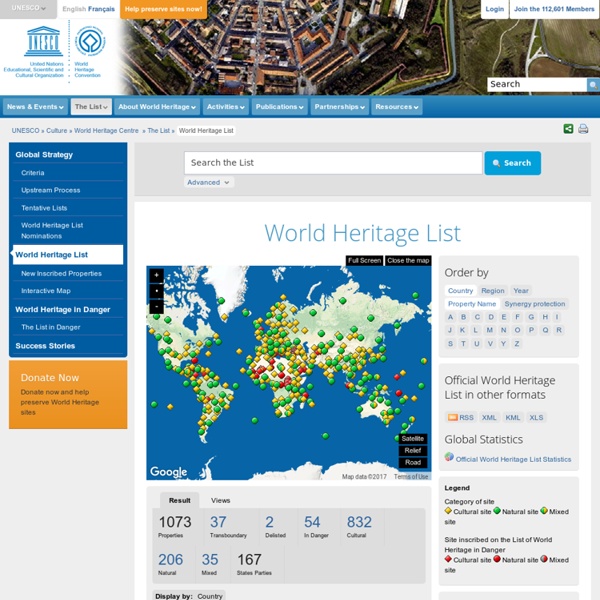 #: As for 19 Natural and Mixed Properties inscribed for geological values before 1994, criteria numbering of this property has changed. See Decision 30.COM 8D.1

Decoding Symbols in Renaissance Art By Ruchi Bhalla Renaissance art is rich not only in terms of beauty, aesthetics and technique but also in terms of the colours and symbols that it carries, portraying an insightful visual language. There are some symbols that have held consistency in their meaning and make recurrent appearances in prominent masterpieces. The deeper you delve into the Renaissance art, the more intriguing and open to interpretation it becomes.

The Cool Hunter Preachers Rock, Preikestolen, Norway Blue Caves - Zakynthos Island, Greece Skaftafeli - Iceland Plitvice Lakes – Croatia Crystalline Turquoise Lake, Jiuzhaigou National Park, China Nation Branding » Nation Brands Index 2009 The long-awaited Nation Brands Index 2009, one of the cornerstones of nation branding and one of the most relevant tools to measure the nature and power of a nation brand, has just been released. The index, which surveys people from across 20 major developed and developing countries about their image of 50 countries, has revealed on this occasion an an unprecedented phenomenon – a dramatic improvement in the rankings of one country, the United States. Indeed, if there was one undisputed headline for the Nation Brands Index 2009 results, it would be Barack Obama’s impressive effect on Brand America.

English 50 Exercises for Story Writers English 50 – Intro to Creative Writing: Exercises for Story Writers Basic Theory: What is a short story? As soon as someone delivers a definition, some good writer will write a story that proves the theory wrong. About the only thing we can say for sure is that short stories are short and that they are written in what we call prose. Some attributes, however, seem to show up more often than not. Sculpture of mystery king dating back 3,000 years found in Israel Posted about an hour agoSat 9 Jun 2018, 4:08pm An enigmatic sculpture of a king's head dating back nearly 3,000 years has set off a modern-day mystery caper as scholars try to figure out whose face it depicts. The five-centimetre sculpture is an exceedingly rare example of figurative art from the Holy Land during the 9th century BC — a period associated with biblical kings. Exquisitely preserved but for a bit of missing beard, nothing quite like it has been found before.

101 Web 2.0 Teaching Tools Online tools and resources have made it easier for teachers to instruct students, and for students to collaborate with those teachers and with other students and parents. These “Web 2.0” teaching tools aren’t magical, but they may seem to defy definition at times since they save time, help you to stay organized, and often take up little space on a computer. Some of these applications are Web-based, which means that they can be accessed from any computer. The following list is filled with tools that will make a teacher’s, or those enrolled in the best online education programs, life easier. The categories are listed in alphabetical order and the links to each tool are also listed alphabetically within those categories. Aggregators