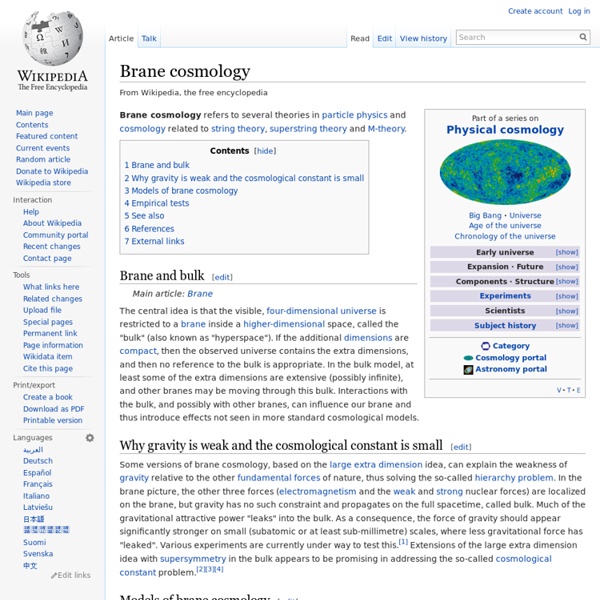 Brane cosmology refers to several theories in particle physics and cosmology related to string theory, superstring theory and M-theory. Brane and bulk[edit] The central idea is that the visible, four-dimensional universe is restricted to a brane inside a higher-dimensional space, called the "bulk" (also known as "hyperspace"). Why gravity is weak and the cosmological constant is small[edit] Some versions of brane cosmology, based on the large extra dimension idea, can explain the weakness of gravity relative to the other fundamental forces of nature, thus solving the so-called hierarchy problem. Models of brane cosmology[edit] One of the earliest documented attempts to apply brane cosmology as part of a conceptual theory is dated to 1983.[5] The authors discussed the possibility that the Universe has dimensions, but ordinary particles are confined in a potential well which is narrow along spatial directions and flat along three others, and proposed a particular five-dimensional model.

John C. Lilly John Cunningham Lilly (January 6, 1915 – September 30, 2001) was a American physician, neuroscientist, psychoanalyst, psychonaut, philosopher, writer and inventor. He was a researcher of the nature of consciousness using mainly isolation tanks,[1] dolphin communication, and psychedelic drugs, sometimes in combination. Early life and education[edit] John Lilly was born to a wealthy family on January 6, 1915, in Saint Paul, Minnesota. His father was Richard Coyle Lilly, president of the First National Bank of St. Paul. Lilly showed an interest in science at an early age. While at St. Despite his father's wishes for him to go to an eastern Ivy-league college to become a banker, Lilly accepted a scholarship at the California Institute of Technology to study science. In 1934, Lilly read Aldous Huxley's Brave New World. Lilly became engaged to his first wife, Mary Crouch, at the beginning of his junior year at Caltech. At the University of Pennsylvania, Lilly met a professor named H. S.E.T.I.

Standing wave Two opposing waves combine to form a standing wave. For waves of equal amplitude traveling in opposing directions, there is on average no net propagation of energy. Moving medium[edit] As an example of the first type, under certain meteorological conditions standing waves form in the atmosphere in the lee of mountain ranges. Standing waves and hydraulic jumps also form on fast flowing river rapids and tidal currents such as the Saltstraumen maelstrom. Opposing waves[edit] In practice, losses in the transmission line and other components mean that a perfect reflection and a pure standing wave are never achieved. Another example is standing waves in the open ocean formed by waves with the same wave period moving in opposite directions. Mathematical description[edit] In one dimension, two waves with the same frequency, wavelength and amplitude traveling in opposite directions will interfere and produce a standing wave or stationary wave. and where: Examples[edit] Sound waves[edit] Light[edit]