10 Best Foods and Drinks for Exercising 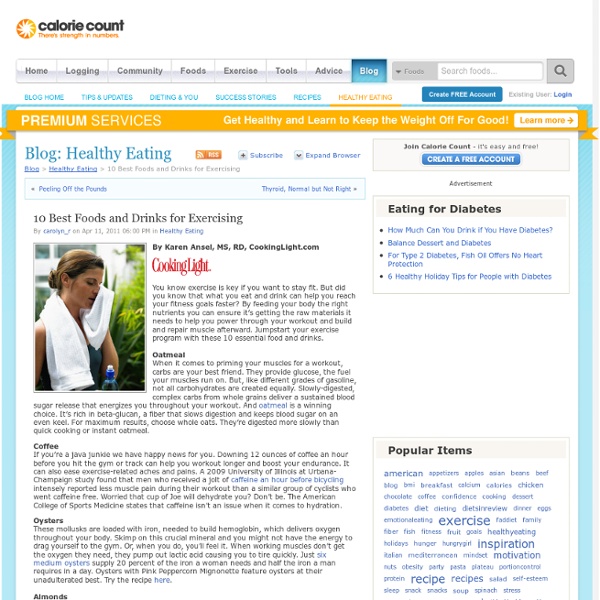 You know exercise is key if you want to stay fit. But did you know that what you eat and drink can help you reach your fitness goals faster? By feeding your body the right nutrients you can ensure it’s getting the raw materials it needs to help you power through your workout and build and repair muscle afterward. Jumpstart your exercise program with these 10 essential food and drinks. OatmealWhen it comes to priming your muscles for a workout, carbs are your best friend. They provide glucose, the fuel your muscles run on. CoffeeIf you’re a java junkie we have happy news for you. OystersThese mollusks are loaded with iron, needed to build hemoglobin, which delivers oxygen throughout your body. AlmondsIt may sound counterintuitive, but the more intensely you exercise the more damaging free radicals your body produces. RaisinsSkip the energy bar and fuel up with a small box of raisins instead. WaterThink you need a sports drink during or after exercise? Your thoughts...

Welcome 2012! New Year's Around the World - Alan Taylor - In Focus As midnight marched across the world's time zones last night, people welcomed the start of a new year, ushering out the old and toasting the new. From Beijing to Moscow, Beirut to Paris, and London to New York, parties, fireworks and festivals welcomed 2012, the Year of the Dragon in the Chinese Lunar Calendar. Gathered here are images from these celebrations last night, and the many people who took part. Everest Home Improvements Despite what modern cooking shows might tell you, whipping up a gourmet meal isn’t just a case of slicing, dicing and measuring ingredients before throwing them into a pan. You can’t just turn the oven on and gaze wistfully out of your Everest windows until it emerges perfectly cooked. It takes a lot of knowledge and preparation to be a whizz in the kitchen, which is why Everest Home Improvements have produced this Kitchen Cheat Sheet to help you on your way to your first Michelin star! Save it, Print it & Stick it on the fridge Whether you are new to cooking or an experienced chef, everyone can use a little help in the kitchen sometimes.

22 Best Exercises for a Perfect Butt … Exercises for butt — type that into Google and see how many useless links pop up! So frustrating for a girl who wants to go from slightly saggy to bootylicious, isn’t it? Well, my dear, I can help! After many consultations with my personal trainer, there’s hope at hand. Bodyweight Exercise Routines from Basic to Advanced One of my favorite aspects of bodyweight training is how its underlying simplicity is so scalable, from basic to extremely advanced levels. So, today I’m going to highlight an outdoor bodyweight workout for lower and upper body that can be done at basic, intermediate or advanced levels, which was featured in an article about Global Bodyweight Training in last month’s Men’s Health South Africa, called “The Evolution of Exercise”. Click here to read the complete Men’s Health article as a PDF. I’m pretty excited with how the Men’s Health article takes the time to explain the Global Bodyweight Training system, and in particular to demonstrate how the progressions work:

Nutrition 101: Eat To Burn Fat The 15 Best Fat-Burning Foods 1. Walnuts All nuts do contain some amount of the omega-3 fat alpha-linolenic acid, but most only contain trace amounts. One ounce provides almost 3g of alpha-linolenic acid. 50 Amazingly Helpful Time-Tested Tips for the Kitchen You know all of those helpful kitchen-related suggestions that old-timers are so willing to share with the younger generations? These little tips and tricks might be called “kitchen hacks” these days, but they’re still the same good old nuggets of wisdom that they always were. As with any old wives’ tale, hack, or tip, your mileage may vary. Some of these gems have been around for several lifetimes - and according to most grandmas, they really work. 1.

Article Details Hell Raiser Training by Rage Let’s face it, you’re not going to turn down more size if you can get it now are you? If you just happen to add an inch onto your arms, are you going to sit back and regret it? Fuck no. You’re in the gym busting your ass for a reason. 3-Ingredient Healthy Ice Cream Come January, the hum and buzz of juicers everywhere builds and I hear of more and more people making resolutions to clean out their systems and drink more juice, at least temporarily. No judgement; in fact, last year at this time I was on a five-day juice cleanse so my juicer was working hard and I was feeling alive and clean. This year, though, I am more in the mood to make my ice cream machine hum rather than my juicer.

Book Of Art January 18th, 2011 Books of Art by Isaac Salazar, a simple idea well executed. found at ffffound Wine Notes: Antica Terra was up to the challenge of 2011 harvest View full sizeBRENT WOJAHN/THE OREGONIANAntica Terra winemaker Maggie Harrison (right), sorting grapes with Megan Iversen, says despite challenges posed by weather and locale, 2011 could end up the wineryâs finest yet. If 2011 had been a typical year, the wine-grape harvest would have happened two months ago. But 2011 was an anomalous year. The Willamette Valley experienced the coldest April through June on record. The remainder of the summer was colder than average; one OSU horticulturist declared it the coldest growing season in more than 50 years.