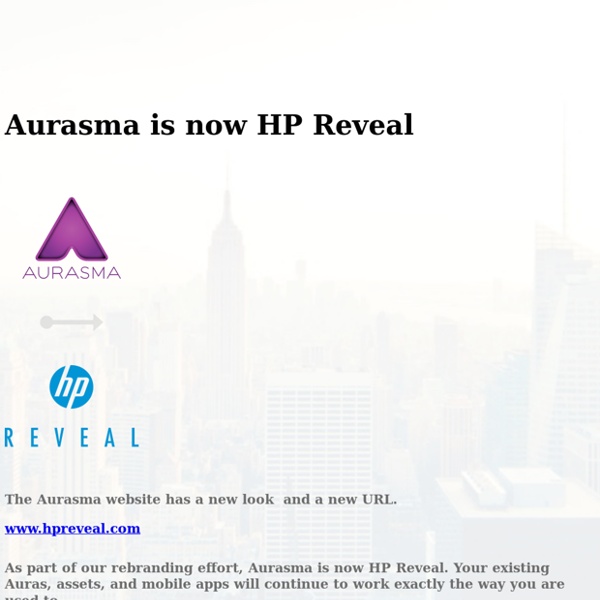 10 great virtual field trips to check out in 2017 Virtual field trips let you take students all over the world to unique experiences they wouldn’t get otherwise. Here are 10 to check out. (Public domain image via Pixabay.com) In 2004, I was about to start my first teaching job. That’s when I got introduced to the world. Features Easily drag & dropengaging content With the Layar Creator, you can enhance flyers, postcards, packaging or any other item with interactive content, including video messages, Web and social links, photo slideshows, music clips and much more! Transform everyday objects into… A multimedia player Bring print to life with rich media, including video messages, photo slideshows and music clips. A social media hub

Werner Herzog on the future of film school, critical connectivity, and Pokémon Go These are questions nobody asks, of course, because this is Werner Herzog. As a documentarian who has traveled to the furthest reaches of the indifferent wilderness to ponder humanity's place in it, there are very few filmmakers whose perspective on our digital lives I'd be more interested in. Lo and Behold, which was financed by a network management company, examines the myriad ways our nature as humans has adapted to, and sometimes violently resisted, the constraints and freedoms of online life. Told in short, episodic acts, the film's subjects range from a family that was targeted by unimaginable harassment after the death of their daughter, to an internet addiction rehab facility, to the UCLA basement where the very first message was sent over a network. It's a delight to be taught by one of our least cynical filmmakers

Chromebook  ■  Hapara Are you doing it right? by +Jack West, Hapara Senior Research Analyst School is starting in the Northern Hemisphere. Here in the U.S., we say, “August is the new September,” as many school districts are deciding to begin school earlier and end earlier to log in more instructional hours before the April/May standardized testing season. Many school districts rolled out Chromebooks last year, and even more are doing so this year. Last fall, sales of Chromebooks eclipsed those of iPads in education.

SeeMore Interactive – The Augmented Reality Retail App SeeMore Interactive brings retail to life, facilitating e-commerce and mobile shopping from virtually anywhere. It helps brands to allow their customers see more. This augmented reality retail app uses an advanced image recognition application to allow buyers to activate an interactive experience instantly through the camera of their smartphone. This smart technology is beyond augmented reality that allows real-life objects, products and prints to be displayed along with interactive content such as product details, offers, recommended products for purchase, loyalty points and more. To experience this technology, you need to hold your smartphone camera using this augmented reality app over the image. The AR technology of the app will activate automatically to provide a unique experience.

Medical Students Are Using Augmented Reality to Study Patients in 3D Plenty of companies are working on ways to use virtual reality and its cousin, augmented reality, for entertainment purposes—inventing futuristic video games, three-dimensional movies, and the like. But these same kinds of technologies also have some fascinating non-entertainment applications, Dr. Toby Cosgrove of the Cleveland Clinic said during an interview broadcast to attendees at the Brainstorm Health conference in San Diego, Calif. on Wednesday. Cosgrove, the Cleveland Clinic president and CEO and a former cardiac surgeon, talked about how his institution has partnered with Microsoft to create new ways for medical students to learn about patient care, and he provided a short demonstration of it in the video.

ARToolKit Home Page ARToolKit is a software library for building Augmented Reality (AR) applications. These are applications that involve the overlay of virtual imagery on the real world. For example, in the image to the right a three-dimensional virtual character appears standing on a real card. Snapchat has quietly introduced the world to augmented reality — Quartz If there was such a thing as a Holy Grail in technology, virtual and augmented reality would probably be it. Every tech giant—from Google and Facebook to Microsoft and, reportedly, even Apple—have been researching how to connect our physical and digital worlds cohesively. But Snapchat might be closer than all of them. 18 Digital Tools and Strategies That Support Students’ Reading and Writing Teachers in Littleton, Colorado — like teachers in many places — are increasingly asking students to read and write online. Free tools like Google Docs have made it easy for students to work on the same piece of writing at home and at school, and have allowed teachers to explore collaborative writing assignments and synchronous editing with students. There are also many digital tools that can support students as they learn how to read deeply, take well-cited notes, and navigate the writing process.

3-D Maps, Camera Phones Put 'Reality' in Augmented Reality Earthmine says its three-dimensional reality augmentation software can help locationally-aware directories and search engines label points of interest with more precision than Google Street View or other solutions can. Augmented reality software promises to let us see the world as the Terminator saw it: overlaid with digital information. Given that most of us aren’t cyborg assassins from the future, we’re more likely to use the technology to see restaurant ratings as we walk past that new taqueria, status updates floating over friends’ heads or a trail of digital breadcrumbs leading us back to our hotel rooms. Most of us will use smartphones instead of a head-mounted display because cellphone cameras help these services reconcile digital and physical reality without making you look like a cyborg assassin. But as the video below shows, the digital tags in today’s early augmented-reality mobile apps float unmoored, as if not quite tethered to reality. “What is the killer application?