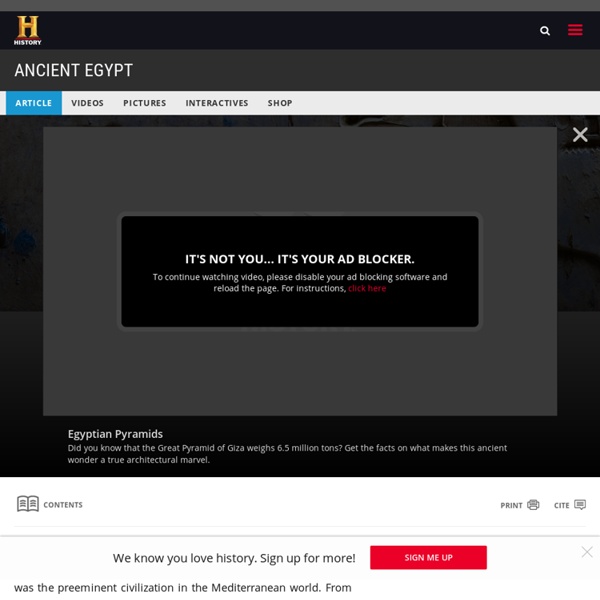 Under Ahmose I, the first king of the 18th dynasty, Egypt was once again reunited. During the 18th dynasty, Egypt restored its control over Nubia and began military campaigns in Palestine, clashing with other powers in the area such as the Mitannians and the Hittites. The country went on to establish the world’s first great empire, stretching from Nubia to the Euphrates River in Asia. In addition to powerful kings such as Amenhotep I (1546-1526 B.C.), Thutmose I (1525-1512 B.C.) and Amenhotep III (1417-1379 B.C.), the New Kingdom was notable for the role of royal women such as Queen Hatshepsut (1503-1482 B.C.), who began ruling as a regent for her young stepson (he later became Thutmose III, Egypt’s greatest military hero), but rose to wield all the powers of a pharaoh. All of the New Kingdom rulers (with the exception of Akhenaton) were laid to rest in deep, rock-cut tombs (not pyramids) in the Valley of the Kings, a burial site on the west bank of the Nile opposite Thebes.

Ancient Egyptian mummies unearthed after more than 2,600 years SAQQARA, Egypt — More than 2,600 years since they were buried, archaeologists in Egypt said Saturday they had found at least 59 ancient coffins in a vast necropolis south of the country's capital Cairo, one containing the pristine mummy of an ancient priest. The ornate sarcophagi have remained unopened since they were entombed near the famed Step Pyramid of Djoser in Saqqara, according to Egypt's Ministry of Tourism and Antiquities. Footage shared by the ministry showed colorful sarcophagi decorated with ancient Egyptian hieroglyphics. Other artifacts and at least 28 statues were found in the two deep wells, the ministry said. A sealed door was also unearthed where it is expected more mummies may lie behind, said Khaled el-Anany the first Minister of Antiquities and Tourism, adding that the artifacts were in an excellent state of preservation and would be displayed in the Grand Egyptian museum next year.

Explore Ancient Egypt Explore Ancient Egypt With 360-degree and other imagery, walk around the Sphinx, enter the Great Pyramid, visit tombs and temples, and more. Want to walk around the Sphinx? Clamber inside the Great Pyramid of Giza and seek out the pharaoh's burial chamber? Visit the magnificent tombs and temples of ancient Thebes? In this multi-layered, highly visual interactive, view 360° panoramas, "walkaround" photos, and other breathtaking imagery shot throughout the Giza Plateau and ancient Thebes (modern-day Luxor), often with special permission. Xibalba - Maya Place of Fear Xibalba Underworld Discovered by Maya Archaeologists Xibalba Maya Place of Fear Xibalba Underworld Discovered by Maya Archaeologists Xibalba Would you go swimming in a hidden, sacred sinkhole or “cenote” that the Maya believed led to their gruesome underworld of Xibalba? Tourists may today brave the clear, refreshing pools, but do the locals dare trespass in the domain of their ancestors’ underworld gods? What is Xibalba? Xibalba (pronounced: Shee-bal-ba) is the name the K’iche Maya gave to their underworld and means “place of fear or fright“.

Xibalba Xibalba (Shee-bal-ba) was the name the K'iche Maya gave to the underworld. For the Yucatec Maya the underworld was known as Metnal. The name Xibalba translates as 'Place of Fright', which indicates the terror the place had in the Maya imagination.