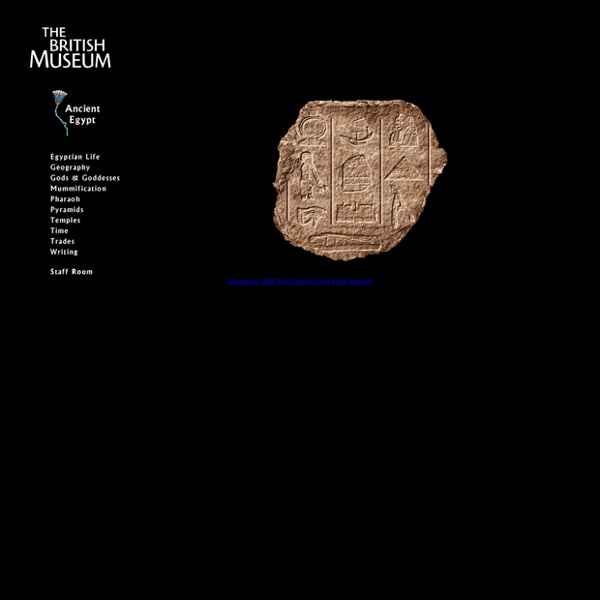 Ancient Egypt Military Egypt’s defensive advantages were not enough to stop the conquering Hyskos, who invaded at the end of the Middle Kingdom. The Egyptians learned from their defeat and reinvented their army, ushering in a new age of military glory. The Egyptian lands of the Archaic Period, Old Kingdom and Middle Kingdom were not devoid of armies or enemies, however. Nomads raided from the desert; Libyans attacked the Nile delta; and the Nubians threatened the southern border. TourEgypt / Ancient Egypt: Land of the Gods and Pyramids Ancient Egyptian history is a long and complex one with more than 3,000 years of details. Throughout these 3,000 years ancient Egyptians lived under about 30 dynasties, with each dynasty being based on the lineage of the kings/pharaohs. Throughout all these years, the country experienced many changes, some being very drastic.

Ancient Egypt - Ancient History Under Ahmose I, the first king of the 18th dynasty, Egypt was once again reunited. During the 18th dynasty, Egypt restored its control over Nubia and began military campaigns in Palestine, clashing with other powers in the area such as the Mitannians and the Hittites. The country went on to establish the world’s first great empire, stretching from Nubia to the Euphrates River in Asia.

Lake Chad: almost gone - Vital Water Graphics: Solid maps to accompany article Straddling the borders of Chad, Niger and Cameroon in West Africa, Lake Chad has been a source of freshwater for irrigation projects in each of these countries. Maps drawn from a series of satellite images show a dramatic decrease in the size of the lake over the past 30 years. Since 1963, the lake has shrunk to nearly a twentieth of its original size, due both to climatic changes and to high demands for agricultural water. Since 1963, the surface area of Lake Chad has decreased from approximately 25,000 km2 to 1,350 km2 (Scientific American, 2001).

Egypt Egypt i/ˈiːdʒɪpt/ (Arabic: مصر‎ Miṣr), is a transcontinental country spanning the northeast corner of Africa and southwest corner of Asia, via a land bridge formed by the Sinai Peninsula. Most of its territory of 1,010,000 square kilometers (390,000 sq mi) lies within the Nile Valley of North Africa and is bordered by the Mediterranean Sea to the north, the Gaza Strip and Israel to the northeast, the Gulf of Aqaba to the east, the Red Sea to the east and south, Sudan to the south and Libya to the west. With over 86 million inhabitants, Egypt is one of the most populous countries in Africa and the Middle East, and the 15th-most populated in the world. The great majority of its people[4] live near the banks of the Nile River, an area of about 40,000 square kilometers (15,000 sq mi), where the only arable land is found. The large regions of the Sahara Desert, which constitute most of Egypt's territory, are sparsely inhabited.

Ancient Egyptian Religion Religion guided every aspect of Egyptian life. Egyptian religion was based on polytheism, or the worship of many deities, except for during the reign of Akenaton. The Egyptians had as many as 2000 gods and goddesses. Some, such as Amun, were worshipped throughout the whole country, while others had only a local following. Often gods and goddesses were represented as part human and part animal. Reeder's Egypt Page This page is dedicated to examining some aspects of the art, archaeology, religion and history of Egypt. Comments and suggestions should be sent to : Greg Reeder (greg@egyptology.com) No current study of Egyptology would be complete without a copy of KMT: A MODERN JOURNAL OF ANCIENT EGYPT. Click on the KMT icon to discover the land of KEMET ( KMT ). THE TOMB of NIANKHKHNUM and KHNUMHOTEP in the necropolis of Saqqara, has intrigued some Egyptologists because of its problematic treatment of its two male occupants, manicurists to king Niuserre of the 5th dynasty. Explore this remarkable tomb by clicking on the icon.

Explore Ancient Egypt Explore Ancient Egypt With 360-degree and other imagery, walk around the Sphinx, enter the Great Pyramid, visit tombs and temples, and more. Want to walk around the Sphinx? Clamber inside the Great Pyramid of Giza and seek out the pharaoh's burial chamber? Visit the magnificent tombs and temples of ancient Thebes? In this multi-layered, highly visual interactive, view 360° panoramas, "walkaround" photos, and other breathtaking imagery shot throughout the Giza Plateau and ancient Thebes (modern-day Luxor), often with special permission.