Maya Family Law - Exhibit - Aztec and Maya Law - Tarlton Law Library at Tarlton Law Library. Bloodletting and Piercing in Mayan Culture. Throughout the various empires and cultures in ancient Mesoamerica, the act of human and animal sacrifice was a common occurrence. 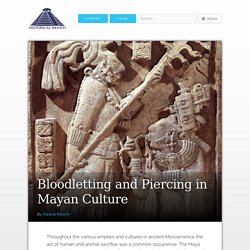 The Maya practiced human and animal sacrifice as well, but had more of a fixation of auto-sacrificial bloodletting than the other surrounding cultures. The act of bloodletting (‘ch’ahb’ ’ which is roughly translated as ‘penance’) was not limited to gender, both woman and men practiced bloodletting. However, it was more common among the ruling and noble men. It was believed that blood contains a persons’ life-force or soul which made it the perfect offering to the gods. Maya Bloodletting Rituals - To Speak to the Gods. Bloodletting—cutting part of the body to release blood—is an ancient ritual used by many Mesoamerican societies. 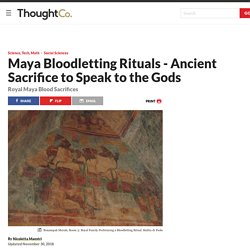 For the ancient Maya, bloodletting rituals (called ch'ahb' in surviving hieroglyphs) were a way that Maya nobles communicated with their gods and royal ancestors. The word ch'ahb' means "penance" in the Mayan Ch'olan language, and may be related to the Yukatekan word ch'ab', meaning "dripper/dropper. " The blood-letting practice usually involved only the highest nobles who would perforate their own body parts, mainly, but not only, their tongues, lips, and genitals. Both men and women practiced these types of sacrifices. Ritual bloodletting, along with fasting, tobacco smoking, and ritual enemas, was pursued by the royal Maya in order to provoke a trance-like state (or altered state of consciousness) and thereby achieve supernatural visions and communicate with dynastic ancestors or underworld gods.

Bloodletting Occasions and Locations Bloodletting Tools. The Ancient Maya and Human Sacrifice. For a long time, it was commonly held by Mayanist experts that the “pacific” Maya of Central America and southern Mexico did not practice human sacrifice. 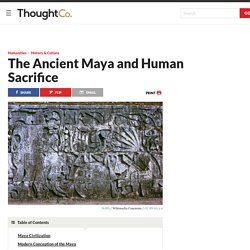 However, as more images and glyphs have come to light and been translated, it appears that the Maya frequently practiced human sacrifice in religious and political contexts. Maya Civilization The Maya civilization flourished in the rain forests and misty jungles of Central America and southern Mexico ca. B.C.E. 300 to 1520 C.E. Anthropological Perspectives on Death. Death is already an uncomfortable topic to talk about, let alone the idea of human sacrifices. 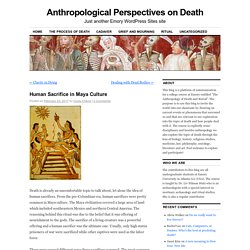 From the pre-Columbian era, human sacrifices were pretty common in Maya culture. The Maya civilization covered a large area of land which included southeastern Mexico and northern Central America. The reasoning behind this ritual was due to the belief that it was offering of nourishment to the gods. The sacrifice of a living creature was a powerful offering and a human sacrifice was the ultimate one. Usually, only high status prisoners of war were sacrificed while other captives were used as the labor force. There were several different ways these sacrifices occurred.

These rituals provided hope and security to the Maya culture and demonstrated their own outlooks on death. Sources: Understanding Mayan Human Sacrifice. Why did the Maya perform human sacrifices? 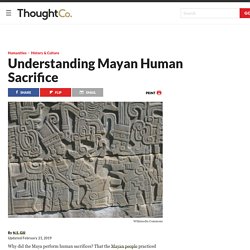 That the Mayan people practiced human sacrifice is not in doubt, but providing motives is part speculation. Feeding the gods: Hundreds of skulls reveal massive scale of human sacrifice in Aztec capital. The priest quickly sliced into the captive's torso and removed his still-beating heart. 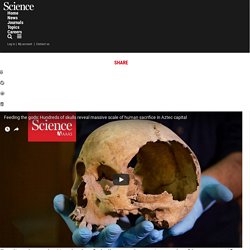 Overview of Mayan Art. The 700 years of the Mayan Classical saw a great flowering of Mayan art. 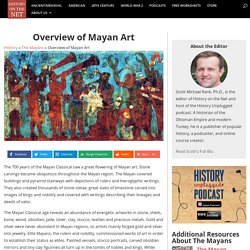 Stone carvings became ubiquitous throughout the Mayan region. The Mayan covered buildings and pyramid stairways with depictions of rulers and hieroglyphic writings. They also created thousands of stone stelae, great slabs of limestone carved into images of kings and nobility and covered with writings describing their lineages and deeds of valor. The Mayan Classical age reveals an abundance of energetic artworks in stone, shells, bone, wood, obsidian, jade, silver, clay, stucco, textiles and precious metals. Gold and silver were never abundant in Mayan regions, so artists mainly forged gold and silver into jewelry. The artists and artisans creating these works came from every level of society.

Alux. Some Maya believe that the Aluxob are called into being when a farmer builds a little house on his property, most often in a maize field (milpa). 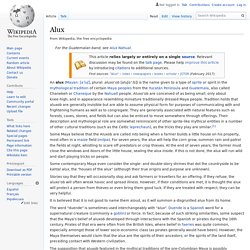 For seven years, the alux will help the corn grow, summon rain and patrol the fields at night, whistling to scare off predators or crop thieves. At the end of seven years, the farmer must close the windows and doors of the little house, sealing the alux inside. If this is not done, the alux will run wild and start playing tricks on people. Nagual. Shapeshifting sorcerer in Mesoamerican folk religion The Naguals, shapeshifting creatures. 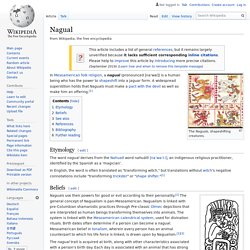 In Mesoamerican folk religion, a nagual (pronounced [na'wal]) is a human being who has the power to shapeshift into a jaguar form. A widespread superstition holds that Naguals must make a pact with the devil as well as make him an offering. Etymology[edit] Vision Serpent. A Vision Serpent, detail of Lintel 15 at the Classical Maya site of Yaxchilan The Vision Serpent is an important creature in Pre-Columbian Maya mythology, although the term itself is now slowly becoming outdated.

They were so revered, that one of the main Mesoamerican deities, Quetzalcoatl, was represented as a feathered serpent. The name means "beautiful serpent" (from Nahuatl, "quetzalli" means beautiful and "coatl" meaning snake or serpent.).[1] The Brutal and Bloody History of the Mesoamerican Ball Game, Where Sometimes Loss Was Death. A ball court in Mexico (photograph by Dennis Jarvis) The Olmecs started it, the Maya tweaked it, and the Aztecs nailed it. 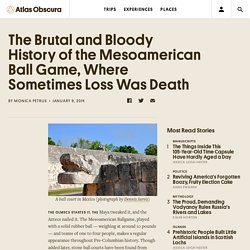 The Mesoamerican Ballgame, played with a solid rubber ball — weighing at around 10 pounds — and teams of one to four people, makes a regular appearance throughout Pre-Columbian history. Though added later, stone ball courts have been found from Arizona to Nicaragua. The Mayan Ball Game. The Mesoamerican ball game was played, experts think, by all the cultures in the region, beginning with the Olmecs who may have invented it. The ball game goes back 3,500 years, making it the first organized game in the history of sports. Mayans loved the game and everyone played at various times, but it also held deep religious, ritual meaning as well. For that reason, it was sometimes played just as a game, with lots of gambling on the teams. What Did the Mayans Do for Fun? Mayan Sports - History of Ancient Mayan Sports such as Ball Game, Tlachtli, Jai Alai, Bul and Patolli. Mayan culture was a very vibrant culture and they seemed to enjoy life to its fullest extent. Even the religion which they followed, despite having some unpleasant aspects such as the human sacrifice, had dancing and singing as essential elements.

Mayan people played a variety of Mayan sports for entertainment and in their leisure time. Maya Civilization. The Maya, the most enduring and most advanced pre-Columbian civilization in the ancient New World, lived in parts of present day southern Mexico (Tabasco, Chiapas and the Yucatan peninsula), Guatemala, Belize, Honduras and El Salvador. Over two million direct descendants of the Maya still live in the same area and speak dialects of Mayan. Maya City-States Maya civilization encompassed a series of city-states each with its own king and district governors who managed the surrounding towns and region.

The Maya built very sophisticated cities populated by advanced buildings and temples. 2000 years of Mayan Literature - World Archaeology. The only work of Mayan literature known outside specialist circles is the Popol Vuh, the 16th century Quiché Mayan book of creation, which has roots in Mayan myth and legend going back perhaps 2,000 years to the pre-Classic Maya civilisation. Precursors of episodes and characters in the Popol Vuh have been found in the art and hieroglyphic writing of the ancient Maya. However, the material was only compiled as a book after the Spanish conquest ofGuatemala. A group of anonymous Quiché Maya wrote it, probably between 1554 and 1558, in their own language but in an alphabetic script borrowed from the Spanish, following the Spanish suppression of their own hieroglyphic script as being the work of the devil.

Their original manuscript, which does not survive, was transcribed by a Dominican friar in Guatemalaand translated into Spanish around 1701. Tedlock does not assume familiarity with the hieroglyphic system, and provides an excellent introductory survey in his first chapter. Related. Mayan Literature – UC Press Blog. Ancient Mayan family life / The Maya: history, culture & religion.

Mayan Families - History of Ancient Mayan Families, Maya Beliefs, Traditions and Customs. Mayan families lived as nuclear units where members of the same family huddled together and lived as a single group. The house of such a family was a thatched hut with no interior partitions. Upon marriage, a Mayan man was required to live with his wife’s parents for a set period and work for them.

After this, he built a home to next to his parents’ home and lived there. The Music of the Maya: Mysterious whistles Confound Experts. Music has held a special role in human society for thousands of years. In ancient China, for instance, sets of bronze bells were played for entertainment and ritual purposes at court. Ancient Classic Maya music.

We are most grateful to Anna Stacy for this excellent introduction to the musical instruments played by the ancient Maya. Stacy is a sophomore student at Brown University (USA). Because she’s interested in learning about how people work, she is pursuing a dual major in neuroscience and anthropology. Everyday Life -  The Mayan Empire. Mayan Everyday Life. Maya Legends (Folklore, Myths, and Traditional Mayan Indian Stories) Indian languages Indian culture American Indian arts This is our collection of links to Maya myths and traditional stories that can be read online. We have indexed our Native American myths section by tribe to make them easier to locate; however, variants on the same legend are often told by American Indians from different tribes, especially if those tribes are kinfolk or neighbors to each other.