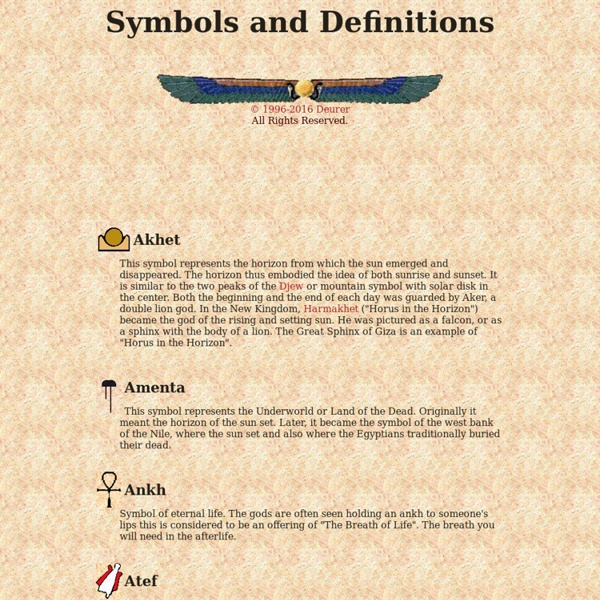 Djed It is believed that the Djed is a rendering of a human backbone. It represents stability and strength. Djew Which means mountain, the symbol suggests two peaks with the Nile valley in the middle. Feather of Maat Represents truth, justice, morality and balance. Fetish of Osiris An animal skin hanging from a stick, this is a symbol of Osiris and Anubis. Flail and Crook A symbol of royalty, majesty and dominion. Heb The heb glyph represents an alabaster bowl. Heb-Sed The Heb-Sed glyph Is a combination of the heb glyph and the sed glyph. Hedjet The White Crown. Ieb This symbol represents a heart. Imenet These symbols represent the west or western desert AKA the land of the dead. Ka The ka is usually translated as "soul" or "spirit" The ka came into existence when an individual was born. Khepresh The blue crown was a ceremonial crown often worn in battle. Khet This symbol represents a lamp or brazier on a stand from which a flame emerges. Maat Represents truth, justice, morality and balance. Menat Naos

Real life experiments that reveal the ancient art and techniques of building Egyptian pyramids Copyright © 2006 by Mike Molyneaux New insights into ancient pyramid construction techniques presented in this article include the following:- [1] The use of battering rams to create acoustic energy for quarrying, shifting and positioning stones. [2] The use of counter-ramps with counter-weight principles for hauling massive stones uphill. [3] The use of overlapping planks and rollers to create an auto-aligning, auto-braking system for the ramps. [4] The use of leveraging towers with counter-weights for lifting stones out of a quarry and onto rollers. [5] Submerging large stones in watery mud for transporting them down rivers or along canals. [6] Partially completed courses of the pyramid forming a spiral staircase to support a ramp to the inner chambers. 1 Actual experiments using scale models A new, realistic set of trials and experiments using scale models or children have now revealed how easily large stones can be transported with rather primitive technology.

The Online Television Community - ShareTV Art Collector: 30 Ancient Egyptian Engravings - With footnotes - 5 - An Egyptian painted wood shabti for Lady Huy with an anthropoid coffin New Kingdom, 18th-19th Dynasty, circa 1550-1196 B.C. The shabti in typical mummiform posture, holding two hoes, wearing a striped tripartite wig and broad collar, the face finely rendered with painted features, the legs with six rows of hieroglyphs for the 'Lady of the house Huy, justified' with the standard shabti text from the Book of the Dead, the wood coffin possibly usurped, with four horizontal bands around the lid and base, a column of hieroglyphic text down the front of the lid with an offering formula to Osiris 'Lord of Abydos', some black and white pigment remaining, the foot of the lid with '112' painted in red, 21.3cm long. An Egyptian limestone anthropoid ancestor bust New Kingdom, 18th-20th Dynasty, circa 1550-1070 B.C. The tripartite wig, as the name suggested, was divided into three parts. An Egyptian feldspar (crystal) and silver falcon amulet New Kingdom, circa 1550-1070 B.C. 3.2cm long Taweret Red jasper

Top 10 Myths About Ancient Egypt History The Ancient Egyptians are shrouded in an aura of mystery and intrigue, cultivated by continuing archeological discoveries. Unfortunately, the sense of awe that pervades Ancient Egypt has also produced countless myths. This list will investigate the most common misconceptions about Ancient Egypt, and include some interesting digressions that will illuminate new areas of their advanced culture. Cleopatra Was Beautiful Cleopatra VII, the last Pharaoh of Ancient Egypt, has always been a cultural figure, renowned for her alluring beauty. Reading about the Ancient Egyptians with their pyramids, mummies and imposing gods, it is easy to reach the conclusion that they were preoccupied with death. Listverse attracts a very rational crowd, but unfortunately there are some who believe that the Egyptians were in contact with aliens. Many believe that we have found out everything we can about Ancient Egypt, and that Egyptology is a dead and buried subject. Pharaohs Killed Servants

Fort Laramie - Old Time Radio Shows - OTR Home > Western > Fort Laramie - (41 Mp3 downloads available) Fort Laramie was a radio Western series that aired Sundays on CBS from January 22 - October 28, 1956. Produced and directed by Norman Macdonnell, this Western drama depicted life at old Fort Laramie during the 19th Century. The 40 episodes starred Raymond Burr as Lee Quince, captain of the cavalry. One year later, Burr became a television star as Perry Mason. Supporting regulars included Vic Perrin as Sgt. 5 Legal and Business Issues to Watch in 2017 | MassPoint Legal and Strategy Advisory PLLC (1) Administrative Law and (De)Regulation Some have suggested that Obama-era administrative actions and regulations can be undone “with a stroke of a pen.” In reality, the process of undoing, modifying, or replacing key Obama-era administrative actions– whether on U.S. economic sanctions, financial services, healthcare, or the environment—will not be as simple, unilateral, or expeditious as some have suggested. To understand and prepare for potential legal and regulatory changes, businesses and other interested parties should acquaint themselves with the U.S. administrative law process– e.g., rulemaking and the roles of the courts and Congress, including whether and how Congress exercises its untested authority to “disapprove” recent Obama Administration regulations under the rarely used 1996 Congressional Review Act. (2) Increased U.S. State & Local Activism (3) Private Sector Role in ESG/Business Ethics (4) Multilateralism, Financial Regulation, and Economic Sanctions

Cracking the Hieroglyphic Code" The earliest attempt at translating hieroglyphics came well before the discovery of the Rosetta Stone. A fifth-century scholar named Horapollo set up a translation system based on hieroglyphics' relation to Egyptian allegories. After Horapollo's hypothesis, 15 centuries of scholars dedicated themselves to a false translation system. De Sacy, who had translated the Demotic portion, tried his hand at the hieroglyphic inscription, but he failed, too. Thomas Young made a significant breakthrough in 1814 when he discovered the meaning of a cartouche [source: BBC]. Identifying the name of the pharaoh Ptolemy, Young was able to make some progress with his translation. Champollion began his linguistic education in 1807 under de Sacy and became familiar with the languages and skills that would aid in his translation of hieroglyphics. In 1822, Champollion got his hands on some very old cartouches. Next, we'll learn about the vast world that opened up after hieroglyphics could be read.

How to Rent Movies With a Very Happy Ending -- Savings Experiment Find out the most economical way to rent movies with this comparison of Netflix versus Redbox. If you're an entertainment maven, chances are you love movies enough to rent them, whether it's a brand-new video such as "Avatar," or a recent classic along the lines of "You've Got Mail." (Hey! So in this installment of the Savings Experiment, allow us to sift through the abundant, popular rental options, because hey: We're all thumbs .. as in thumbs up or thumbs down, a la Siskel and Ebert. Now then: In terms of the plot synopsis, imagine if you will a movie buff who begins by scoping just a few flicks every now and then--let's call him Fast-Rent Freddy. REDBOX Based in the Chicago area, Redbox has become a huge favorite among those who want to pick up a movie on the go, see it for a night and return it the next day, without ever having to brave the aisles at a conventional rental store. Here's how it works: You can reserve movies online at Redbox.com (you need to start an account first).

Isis, Nephtys, Neith and Serket. Four Divine Egyptian Mourners? | HAIR AND DEATH IN ANCIENT EGYPT Last week we saw that in some cases Egyptian art offers images, whose meaning seems not clear, but which are based on well known practices from Ancient Egypt. That was the case of two scenes, one from the Book of the Caverns in the tomb of Ramses IX and the other one from the temple of Osiris in Abydos. In both cases four mourning women appear pulling and shaking a front lock of hair. Four mourners for Osiris with their front lock of hair falling forwards. We know that in Ancient Egypt belief the official mourners who took part in the deceased’s resurrection were two, Isis and Nephtys. These four female figures are categorized in the tomb of Ramses IX as “goddesses” and they are included in the decorative program of a tomb and the temple of Osiris in Abydos, both belonging to a funerary context. Is there a group of four goddesses in Ancient Egypt, who took care of the deceased? Canopic shrine of Tutankhamun with Serket on the left and Isis on the right. Wooden canopic chest of Satipi.

Pyramid Discoveries Will Force History to be Re-Written The world’s largest and oldest pyramid has been discovered in Bosnia A pyramid has been discovered in Bosnia-Herzegovina that is larger, older and more perfectly oriented than Egypt’s Great Pyramid of Giza. Located near the city of Visoko, not only is it the first pyramid to be discovered in Europe, but it is also the largest valley of pyramids in the world. Dr. Its discoverer, Dr. The pyramid in Bosnia-Herzegovina has been dated at over 12,000 years old, and it also features the largest complex of underground tunnels ever discovered. Dr. Dr. Below are some videos that reveal further details about the Bosnian pyramids and the work of Dr. These four videos show an interview of Dr.

How to Watch TV Online for Free (13 more links) Due to the success of the post 13 Places to Watch tv Online for Free and to the numerous comments I’ve decided to make a series of posts contained in the Free Tv category that will complete the list of free time killing links. 1. Streamingtvepisodes It has some good shows too. 2. A simple designed site where visitors can even make money watching tv shows. 3. All the cbs news at a click of a button. 4. Another good site, which offers a few shows not available elsewhere: Chappelle’s Show, Entourage, Jackass, Mythbusters, Penn & Teller: Bullshit! 5. Is one of the best Tv replacement website out there. 6. Your home for Audio and Video Broadcasts from around the World. 7. Democry is a free application you need to install in order to get access to the free tv. 8. You can watch LIVE football/soccer, basketball matches etc, without having to pay a cent! 9. It’s very similar to Peekvid and it has a large database of TV shows, movies, music videos, cartoons, anime and sport clips. 10. 11. 13.

Thoth Tarot & comparisons The Thoth Tarot- Key 15-The Devil & The Night Sun Tarot-Key 15-The Devil: represent a concept that it is so subtle it is easily misunderstood. In fact the early Christian theologians, so misunderstood this concept that it is now considered synonymous with evil.....like the Evil Twin of a One or Monotheistic God... or some such nonsense. As modern person who knows the first law of physics, we know there is only "one energy that cannot be created nor destroyed, only transformed [and transmitted]". Therefore, evil is not and energy, it is a form of upside down thinking, which is often depicted as an upside down pentagram. The Hebrew letter Ayin, shown bottom left on the Thoth card, and top right of the Night Sun Tarot card, is attributed to this card, meaning Eye, which is a metaphor for "I": the "All Seeing Eye", which is the All Seeing Identity shown on the Thoth- goat's forehead. The Path of Ayin (meaning Eye, which is a symbol for The "I"), is the Twenty-sixth Path and is formative.