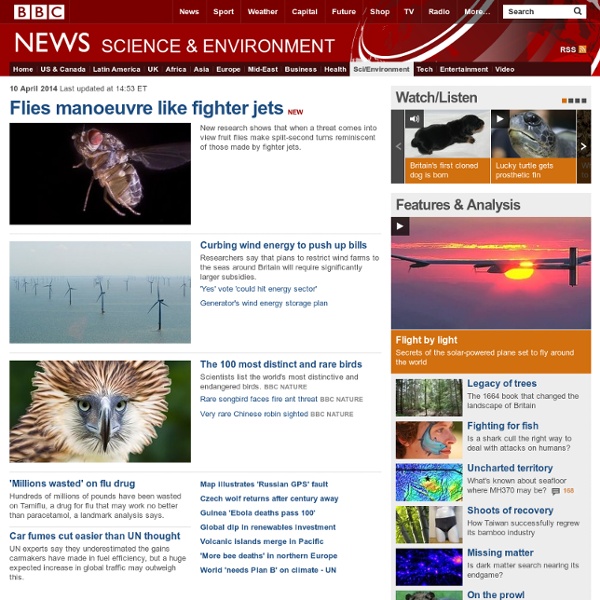 BBC - Virtual Eco-Sphere Copyrighted image Credit: The Open University Open2.net fades away... For ten years, give or take, Open2.net was the online home of Open University and BBC programming. Over the last few months, though, we've been moving into OpenLearn, creating one home for all The Open University's free learning content. It means we share a home with the Open University's iTunesU and YouTube channels, and much more besides. Shark Bay stromatolites at risk from climate change Climate change – resulting in more frequent flooding of the Wooramel River that leads into Shark Bay – may threaten the unique stromatolites that make Shark Bay a World Heritage site. These stromatolites – rocky structures formed over millennia by blue-green algae or cyanobacteria – thrive in Shark Bay’s Hamelin Pool, where an unusual undersea landscape has created an environment twice as saline as normal seawater. Shark Bay was added to the World Heritage List in 1991 because of these stromatolites. They are living examples of the most ancient records of life on Earth. But climate change is disturbing the natural system. The Wooramel River, which flows into Hamelin Pool, has flooded three times in the last year, washing in a huge amount of sediment and damaging Shark Bay’s seagrass meadows.

RWS’ actuations suggest it has something to hide Philippine Daily Inquirer 25 Nov 11; This is in response to the letter of Lim Soon Hua, director for communications of Resorts World Singapore or RWS. (Inquirer, 11/22/11) We beg to disagree that the method RWS used to obtain the dolphins conforms to CITES (Convention on International Trade in Endangered Species of Wild Fauna and Flora) requirements. Investigations - Food and Farming - Can we save the planet through grazing? The next time you look over a hedgerow and see a herd of cows contentedly grazing a field, you may be forgiven for thinking you are witnessing one of the world’s number one climate criminals in action. With a reputation for producing an estimated 33 million tonnes of greenhouse-gases (GHG’S) each year - a staggering 13 per cent of the world’s total emissions - it is not surprising that our bovine friends have belched and farted their way to the top of such an unenviable hit-list. What you may not be aware of however is that this pastoral scene could just be at the forefront of one of the most radical and ingenious solutions to climate change.

Creativity needed to reduce demand for endangered species WWF 25 Nov 11; Efforts to reduce the demand for parts and products from endangered species must effectively address the attitudes, motivations and behaviours that drive this demand if they are to be successful. New and innovative approaches must also be developed for the different groups that can influence the consumer demand for tigers, rhinos and other endangered wildlife species. Thinking laterally These were the conclusions from more than 20 participants from diverse professional backgrounds—including advertising and marketing, social research, behavioural economics, public health and wildlife trade—who met at a workshop in Hong Kong this week.

Staying relevant One zoo shows that animal parks still have a place in society. MANY believe wild animals have no place in captivity. Period. A traditional perception toward zoos is that they are a place where animals are held against their will and gawked at. However, just as cultural values evolve alongside an increasingly educated public, so do society’s collective principles and standards on animal welfare. On various fronts, the purpose of zoos have been called into question. Inside the mind of the octopus Inside the mind of the octopus by Sy Montgomery Photograph: Brandon Cole ON AN UNSEASONABLY WARM day in the middle of March, I traveled from New Hampshire to the moist, dim sanctuary of the New England Aquarium, hoping to touch an alternate reality. I came to meet Athena, the aquarium’s forty-pound, five-foot-long, two-and-a-half-year-old giant Pacific octopus. For me, it was a momentous occasion.

Artificial meat? Food for thought by 2050 Artificial meat grown in vats may be needed if the 9 billion people expected to be alive in 2050 are to be adequately fed without destroying the earth, some of the world's leading scientists report today. But a major academic assessment of future global food supplies, led by John Beddington, the UK government chief scientist, suggests that even with new technologies such as genetic modification and nanotechnology, hundreds of millions of people may still go hungry owing to a combination of climate change, water shortages and increasing food consumption. In a set of 21 papers published by the Royal Society, the scientists from many disciplines and countries say that little more land is available for food production, but add that the challenge of increasing global food supplies by as much as 70% in the next 40 years is not insurmountable.

Durban climate talks: Hidden costs of annual negotiations A member of Oxfam protesting against the use of coal-based energy on Durban's beachfront yesterday. The UN said it would offset some 1,844 tonnes of greenhouse gas emissions resulting from delegates? journeys to and from the conference. -- PHOTO: REUTERS Grace Chua Straits Times 10 Dec 11; DURBAN: It is a time-honoured irony that each year, thousands of people must travel from all over the world to take part in the annual United Nations climate change negotiations.

Prime Indonesian Jungle To Be Cleared For Palm Oil Jakarta Globe 9 Dec 11; Aceh. The man known as Indonesia's "green governor" chases the roar of illegal chainsaws through plush jungles in his own Jeep. He goes door-to-door to tell families it's in their interest to keep trees standing. That's why 5,000 villagers living the edge of a rich, biodiverse peat swamp in his tsunami-ravaged Aceh province feel so betrayed. Their former hero recently gave a palm oil company a permit to develop land in one of the few places on earth where orangutans, tigers and bears still can be found living side-by-side — violating Indonesia's new moratorium on concessions in primary forests and peatlands.

Seized RM3.9 million pangolins likely also from Sabah Seized RM3.9 million pangolins likely also from Sabah Kota Kinabalu: Sabah Customs has not ruled out the possibility that the 5,000kg of frozen pangolin meat seized in Sandakan last week, may have originated from Sabah islands, Sarawak or neighbouring countries. Its Acting Director Dr Janathan Kandok said the department suspected Sandakan is the collection centre before the suppliers meet up and smuggle it out of Sabah. "In the latest case, over 1,000 packets of frozen pangolin meat were seized from a 40-foot long boat at Batu Sapi waters near Kg Bahagia at about 6.30pm on Dec. 7. "This pangolin meat is believed to have medicinal benefits especially for men and it is being sold at RM800 per kg in the international market and RM150 per kg in the local market," he told Daily Express, Monday.

Guide reveals Amazon's biological bounty Mark Kinver BBC News 20 Dec 11; The UN has co-produced a study that lists scientific details of Amazon plant species that can be harvested for economic or medicinal purposes. It is estimated that 80% of people in developing nations depend on non-wood forest products, such as fruit, for nutrition and medicine.