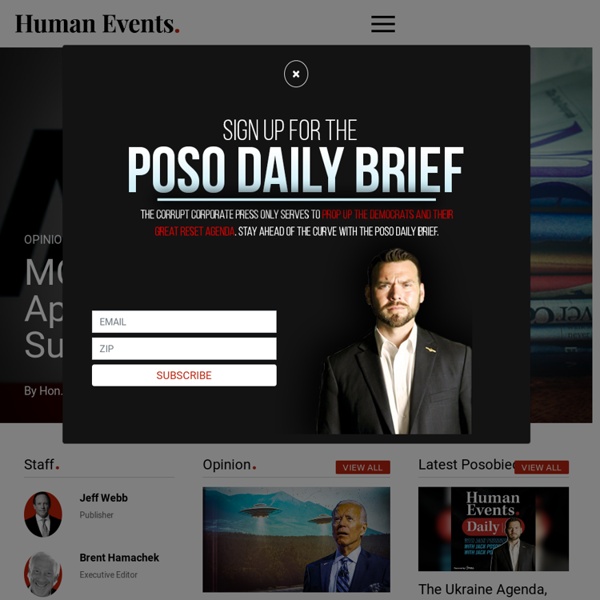 Hillsdale College: Imprimis March 2014 Brian T. Kennedy President, The Claremont Institute BRIAN T. KENNEDY is president of the Claremont Institute and publisher of the Claremont Review of Books. Marginal Revolution Going as far back as Andrew Weiss’s survey paper , there are various attempts to argue that the two theories make the same predictions about earnings and education. A randomly elevated individual will earn more money but is this from having learned more or from being pooled with a more productive set of peers? To explore this, let’s pursue the very good question asked by Bryan Caplan : Our story begins with a 22-year-old high school graduate with a B average.

Rules/FAQ - American Thinker American Thinker Comment Rules: AmericanThinker.com is a community for the civil and thoughtful discussion of issues. AT is not a chatroom, it is a discussion forum. Comments are moderated. AT reserves the right to delete any post for any reason, at any time. Heritage Guide to the Constitution We the People of the United States, in Order to form a more perfect Union, establish Justice, insure domestic Tranquility, provide for the common defense, promote the general Welfare, and secure the Blessings of Liberty to ourselves and our Posterity, do ordain and establish this Constitution for the United States of America. Article I: Legislative Essays » Section 1 All legislative Powers herein granted shall be vested in a Congress of the United States, which shall consist of a Senate and House of Representatives. Section 2 The House of Representatives shall be composed of Members chosen every second Year by the People of the several States, and the Electors in each State shall have the Qualifications requisite for Electors of the most numerous Branch of the State Legislature.

Street Sweep - Fortune Finance: Hedge Funds, Markets, Mergers & Acquisitions, Private Equity, Venture Capital, Wall Street, Washington Apparently Bernie Madoff wasn't the only bad apple at Nasdaq. In the latest shining moment for the U.S. stock exchanges, the Securities and Exchange Commission on Thursday charged Donald Johnson, a former Nasdaq managing director, with ripping off investors to the tune of $755,000 by insider trading ahead of the release of corporate press releases. Johnson, you will be impressed to learn, was in charge through October 2009 of the Nasdaq's "market intelligence" desk, which is surely a misnomer but seems in any case to have afforded him with a lot of info he used to trade profitably on outfits like United Therapeutics (UTHR). Fearless leader

Constitution of the State of California 1849 - California State Archives We, the people of California, grateful to Almighty God for our freedom, in order to secure its blessings, do establish this Constitution. Article I. Declaration of Rights. Sec. 1. Magazine - Table of Contents The Thirteenth Amendment forbade slavery and involuntary servitude, “except as punishment for crime whereof the party shall have been duly convicted.” Crops stretch to the horizon. Black bodies pepper the landscape, hunched over as they work the fields.

The Sharon Statement In this time of moral and political crises, it is the responsibility of the youth of America to affirm certain eternal truths. We, as young conservatives, believe: That foremost among the transcendent values is the individual's use of his God-given free will, whence derives his right to be free from the restrictions of arbitrary force; That liberty is indivisible, and that political freedom cannot long exist without economic freedom; That the purpose of government is to protect those freedoms through the preservation of internal order, the provision of national defense, and the administration of justice; That when government ventures beyond these rightful functions, it accumulates power, which tends to diminish order and liberty;

MITx Opens for Enrollment (and Certification - For Now - Is Free) MIT opens registration today for the first of its online courses offered as part of its new MITx initiative. The university announced MITx late last year as the next step not just in informal online learning but in alternative certification. Registration for MITx is free and open to anyone, and for this first "prototype" class, there is no additional charge to receive the certification upon successful completion of the class. This first class is "6.002x: Circuits and Electronics." It will run from March 5 through June 8 and will be taught by Anant Agarwal and Chris Terman (co-directors of MIT's Computer Science and Artificial Intelligence Laboratory), Piotr Mitros (one of CSAIL's research scientists), and Gerald Sussman (a professor in the department of electrical engineering and computer science). According to the course website, the class will demand approximately 10 hours a week from those enrolled.