Drudge Retort: The Other Side of the News 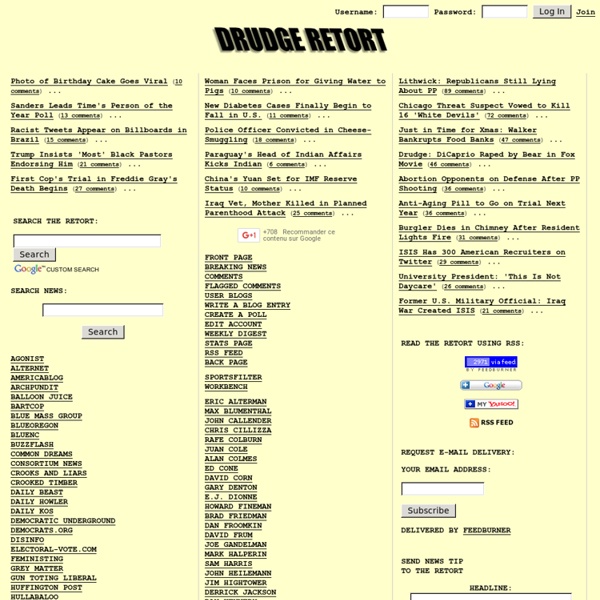 Sputnik International Alex Jones' Infowars: There's a war on for your mind! Weather for Local and International Locations - AccuWeather.com What is a Wiki War? Essentially a wiki war is an ‘edit war’ that occurs on Wikipedia. It happens when editors disagree on article content. The ‘war’ is when many points of view engage in three dimensional chess strategies with each other using Wikipedia policies or admin support to block editing permissions to those with opposing viewpoints, or how veteran Wikipedia contributor David Gerard puts it – “battles to the death for insanely low stakes”. It can be a seriously nasty business, and I’m skeptical that the stakes are so small. The general public is not aware what serious business it can be, because these activities are ‘buried out in the open’ in WikiMedia’s software system. WikiMedia doesn’t discuss them much, nor how dark and sordid they can become. A wiki war is far more nefarious than just a bunch of nerds arguing over sources. I believe this is just a natural signature of an ideological struggle in society. Who ever controls the narrative – influences potentially the entire world through media.

DRUDGE REPORT 2014® Charlie Hebdo investigator took own life hours after attack: report The Associated Press, Paris Wednesday, 14 January 2015 France ordered prosecutors around the country to crack down on hate speech, anti-Semitism and glorifying terrorism, announcing Wednesday that 54 people had been arrested for those offenses since terror attacks left 20 dead in Paris last week, including three gunmen. The order came as Charlie Hebdo’s defiant new issue sold out before dawn around Paris, with scuffles at kiosks over dwindling copies of the satirical newspaper that fronted the Prophet Muhammad anew on its cover. France has been tightening security and searching for accomplices since the terror attacks began, but none of the 54 people have been linked to the attacks. Among those detained was Dieudonne, a controversial, popular comic with repeated convictions for racism and anti-Semitism. Like many European countries, France has strong laws against hate speech and especially anti-Semitism in the wake of the Holocaust. “There should be no more ‘Yes, but,” he insisted.

About - Serial On January 13, 1999, a girl named Hae Min Lee, a senior at Woodlawn High School in Baltimore County, Maryland, disappeared. A month later, her body turned up in a city park. She'd been strangled. Her 17-year-old ex-boyfriend, Adnan Syed, was arrested for the crime, and within a year, he was convicted and sentenced to spend the rest of his life in prison. Sarah Koenig, who hosts Serial, first learned about this case more than a year ago.