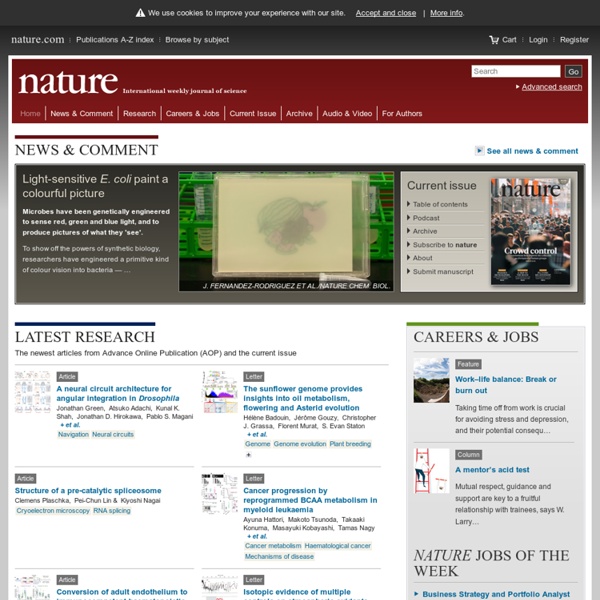 What's That Stuff? You might ask yourself... What's That Stuff? Ever wondered about what's really in hair coloring, Silly Putty, Cheese Wiz, artificial snow, or self-tanners? C&EN presents a collection of articles that gives you a look at the chemistry behind a wide variety of everyday products. Sort: Alphabetically (Text Only) | Most Recent Neuroscience Neuroscience is the scientific study of the nervous system.[1] Traditionally, neuroscience has been seen as a branch of biology. However, it is currently an interdisciplinary science that collaborates with other fields such as chemistry, computer science, engineering, linguistics, mathematics, medicine and allied disciplines, philosophy, physics, and psychology. It also exerts influence on other fields, such as neuroeducation[2] and neurolaw. The term neurobiology is usually used interchangeably with the term neuroscience, although the former refers specifically to the biology of the nervous system, whereas the latter refers to the entire science of the nervous system. Because of the increasing number of scientists who study the nervous system, several prominent neuroscience organizations have been formed to provide a forum to all neuroscientists and educators. History[edit]

Science Illustrated Meerkat Magic Some of the magic moment of filming meerkats for the BBC’s Planet Earth Live. Technology meets fashion Science General Systematic enterprise that builds and organizes knowledge The Universe represented as multiple disk-shaped slices across time, which passes from left to right Modern science is typically divided into three major branches that consist of the natural sciences (e.g., biology, chemistry, and physics), which study nature in the broadest sense; the social sciences (e.g., economics, psychology, and sociology), which study individuals and societies; and the formal sciences (e.g., logic, mathematics, and theoretical computer science), which study abstract concepts.

Spider Silk Is Strong Because It's Smart Spider silk is well known for some spectacular properties. It is stronger than steel and tougher than Kevlar yet flexible enough to be spun into a wide variety of shapes. New research shows that the material is not only strong but also smart. “Spider silk has a particular way of softening and then being stiff that is really essential for it to function properly,” said engineer Markus J.  Synthetic Biology "Synthetic biology" is an umbrella term that refers to a new set of powerful techniques for manipulating the fundamental molecular structures of life, including genes, genomes, cells and proteins. Techniques being developed under the "synthetic biology" rubric include the modification of existing bacteria to produce useful substances or perform new functions, the creation of novel artificial organisms from "scratch," and — less noted to date — the modification of animal and human genes. Synthetic biologists foresee a host of human applications, including new methods to produce drugs, biofuels and vaccines; to diagnose, prevent and cure disease; and — far more controversially — to screen, select, and modify genes for specified traits in embryos, children, and adults. Nonetheless, the field remains in its early days, and separating hype from real potential remains difficult. Such prospects raise concerns for social justice, human rights, and equality.

Physics Various examples of physical phenomena Physics is one of the oldest academic disciplines, perhaps the oldest through its inclusion of astronomy.[8] Over the last two millennia, physics was a part of natural philosophy along with chemistry, certain branches of mathematics, and biology, but during the Scientific Revolution in the 17th century, the natural sciences emerged as unique research programs in their own right.[b] Physics intersects with many interdisciplinary areas of research, such as biophysics and quantum chemistry, and the boundaries of physics are not rigidly defined. New ideas in physics often explain the fundamental mechanisms of other sciences[6] while opening new avenues of research in areas such as mathematics and philosophy.

Study shows brain flexibility, gives hope for natural-feeling neuroprosthetics Opening the door to the development of thought-controlled prosthetic devices to help people with spinal cord injuries, amputations and other impairments, neuroscientists at the University of California, Berkeley, and the Champalimaud Center for the Unknown in Portugal have demonstrated that the brain is more flexible and trainable than previously thought. Their new study, published March 4 in the advanced online publication of the journal Nature, shows that through a process called plasticity, parts of the brain can be trained to do something they normally do not do. The same brain circuits employed in the learning of motor skills, such as riding a bike or driving a car, can be used to master purely mental tasks, even arbitrary ones. Over the past decade, tapping into brain waves to control disembodied objects has moved out of the realm of parlor tricks and parapsychology and into the emerging field of neuroprosthetics. "This is something that is not natural for the rats," said Costa.