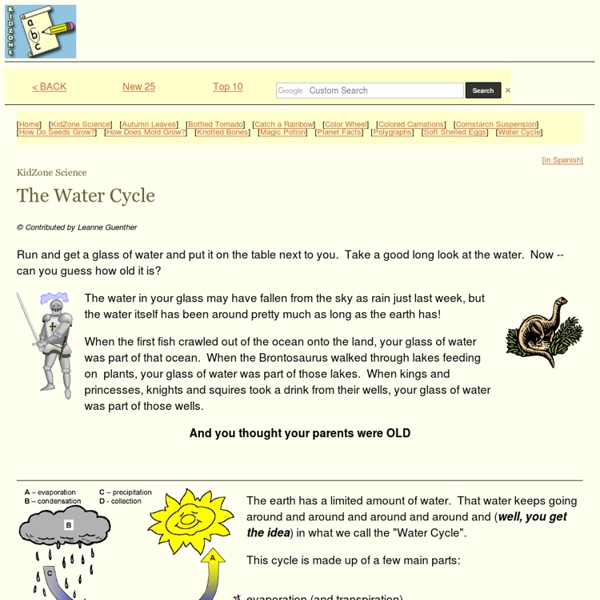 [in Spanish] © Contributed by Leanne Guenther Run and get a glass of water and put it on the table next to you. Take a good long look at the water. The water in your glass may have fallen from the sky as rain just last week, but the water itself has been around pretty much as long as the earth has! When the first fish crawled out of the ocean onto the land, your glass of water was part of that ocean. And you thought your parents were OLD The earth has a limited amount of water. This cycle is made up of a few main parts: evaporation (and transpiration) condensation precipitation collection Evaporation: Evaporation is when the sun heats up water in rivers or lakes or the ocean and turns it into vapor or steam. Do plants sweat? Well, sort of.... Condensation: Water vapor in the air gets cold and changes back into liquid, forming clouds. You can see the same sort of thing at home... Precipitation: Precipitation occurs when so much water has condensed that the air cannot hold it anymore. Collection:

The Water Cycle Introduction Precipitation, evaporation, and transpiration are all terms that sound familiar, yet may not mean much to you. They are all part of the water cycle, a complex process that not only gives us water to drink, fish to eat, but also weather patterns that help grow our crops. Water is an integral part of life on this planet. It is an odorless, tasteless, substance that covers more than three-fourths of the Earth's surface. Most of the water on Earth, 97% to be exact, is salt water found in the oceans. Only about 3% of Earth's water is fresh.

The water cycle — Science Learning Hub The Earth has a finite amount of water. The water that is here today is the same water that will be here in 20 or even 20 million years’ time. So, if all living things use water, how is it that we don’t use up all our water? Dynamic and complex: the global water cycle An interactive diagram featuring the global water cycle with explanations from four New Zealand scientists. The water cycle encompasses a number of processes that circulate water through the Earth’s subsystems. The dynamic water cycle In this video, 4 New Zealand scientists – Dave Campbell, Louis Schipper, David Hamilton and Keith Hunter – talk about how only a small percentage of the Earth’s water is freshwater, and of that small percentage, only a fraction is available for human use. Water and the atmosphere Water enters the atmosphere through evaporation10, transpiration, excretion and sublimation: Transpiration is the loss of water from plants (via their leaves). Water and the biosphere, hydrosphere and geosphere

The Water Cycle for Kids and Students The water cycle describes how Earth's water is not only always changing forms, between liquid (rain), solid (ice), and gas (vapor), but also moving on, above, and in the Earth. This process is always happening everywhere. Back to the water cycle diagram for students. Animals In the grand scheme of the water cycle, animals may not play a very big role, but all animals, including you, participate in moving water around as part of the water cycle. The water cycle is critical to all animals and life on Earth. There is one creature on Earth that does have a very large impact on the water cycle—human beings. Atmosphere The atmosphere truly is the superhighway in the sky that moves water everywhere over the Earth. The next time you go outside you will be standing in the Earth's atmosphere. The air outside may look invisible, but it is full of molecules, including water molecules, as water vapor. How much does a cloud weigh? Clouds are made of water, and water has weight, so how can they float? Lakes

The science of water - An introduction to its amazing properties Advertisement by Chris Woodford. Last updated: August 23, 2016. Pour yourself a glass of water and you could be drinking some of the same molecules that passed through the lips of Julius Caesar, Joan of Arc, Martin Luther King, or Adolf Hitler. Photo: Water covers over two thirds of Earth's surface and is an essential ingredient for all the flourishing life our planet enjoys—including this lily of the valley plant. What is water? We can answer that question in many different ways. Chemically speaking, water is a liquid substance made of molecules—a single, large drop of water weighing 0.1g contains about 3 billion trillion (3,000,000,000,000,000,000,000) of them! Most of the water in our world is a combination of "ordinary" hydrogen atoms with "ordinary" oxygen atoms, but there are actually three different istopes (atomic varieties) of hydrogen and each of those can combine with oxygen to give a different kind of water. Water has no end of amazing properties. Water, ice, and steam Patents

Water cycle As the Earth's surface water evaporates, winds move water in the air from the sea to the land, increasing the amount of fresh water on land. Water vapor is converted to clouds that bring fresh water to land in the form of rain or snow. Precipitation falls on the ground, but what happens to that water depends greatly on the geography of the land at any particular place. The water cycle involves the exchange of energy, which leads to temperature changes. The evaporative phase of the cycle purifies water which then replenishes the land with freshwater. Description[edit] Processes[edit] Many different processes lead to movements and phase changes in water Condensed water vapor that falls to the Earth's surface . The precipitation that is intercepted by plant foliage, eventually evaporates back to the atmosphere rather than falling to the ground. Snowmelt The runoff produced by melting snow. The variety of ways by which water moves across the land. Subsurface flow Evaporation Advection Condensation

The Watercycle The Watercycle The Water Cycle (also known as the hydrologic cycle) is the journey water takes as it circulates from the land to the sky and back again. The Sun's heat provides energy to evaporate water from the Earth's surface (oceans, lakes, etc.). WHY ARE THE OCEANS SALTY? Web Links On the Water Cycle and the Oceans Enchanted Learning®Over 35,000 Web PagesSample Pages for Prospective Subscribers, or click below Click to read our Privacy Policy E-mail Advertisement. Copyright ©2000 EnchantedLearning.com ------ How to cite a web page

Water Education Foundation Did you know that the water you drank this morning might have been the same water a dinosaur drank millions of years ago? Or it may have been the same water that supported Columbus' ships on the sea. There is the same amount of water on Earth today as there has always been. Water itself is the only substance that exists in liquid, gas and solid form - the keys to the water cycle. Water evaporates from oceans, rivers and lakes (water in its liquid form) and rises into the atmosphere (water in its gas form) where it condenses to form clouds. top Of all the water on Earth, only a small amount is available for us to use. 97.2% of the Earth's water supply is salt water. Of the total supply of water on Earth, 0.6% is groundwater (we can use some of this water) 0.01% is in lakes and streams (we can use some of this water) 2.2% is in glaciers and icecaps 0.001% is water vapor In the water world, water is commonly measured in acre-feet. Brush your teeth?

The Water Cycle © 2012 Clipart.com Purpose To help students understand the continuous cycle that water undergoes as it changes form. Context In this lesson, students build upon their previous investigations of water—and its different forms—by learning about the water cycle and its continuous flow around us. In general, students at this level should already have an understanding of the following benchmark ideas: some events in nature have a repeating pattern—such as daily weather patterns or changes in temperature and the appearance of rain and snow at different times of the year; water can be a liquid or a solid and can go back and forth from one form to the other; and water left in an open container disappears, but water in a closed container does not disappear. This lesson furthers what students know about the connection between liquid and solid forms of water, in addition to helping them recognize that water can also be a gas, which is much more difficult at this level. Planning Ahead Motivation