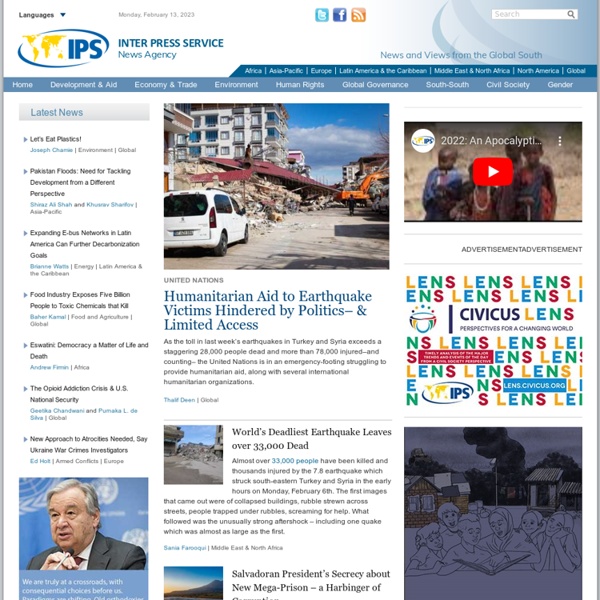 Imagination > News Public demo versions of the IMAGINATION prototype are now available. Please try them at www.imagenotion.com and let us know what you think. 2009. September 14ICT Results reports on IMAGINATION 2009. February 24Deliverable 15 "User Guide of ImageNotion" was delivered. 40 maps that explain the world Maps can be a remarkably powerful tool for understanding the world and how it works, but they show only what you ask them to. So when we saw a post sweeping the Web titled "40 maps they didn't teach you in school," one of which happens to be a WorldViews original, I thought we might be able to contribute our own collection. Some of these are pretty nerdy, but I think they're no less fascinating and easily understandable. A majority are original to this blog, with others from a variety of sources.

Palestine: the world's next nation This map shows in green countries that support recognising Palestine as a state. 252,265 have signed the petition. We reached our target of 1 million before the UN General Assembly on September 19th. Now help us reach our new target of 2,000,000 Ownership Chart: The Big Six Broadcasters make billions in profits while using the public airwaves for free. In return, they are supposed to provide programming that fulfills community needs. Instead, lobbyists have successfully fought to make it easier for broadcast companies to gobble up even more free airspace while doing less to serve the public. Take Action to end the big broadcast swindle. 2011 Revenue: $6.2 billion Company Overview: These private equity firms own Clear Channel, the largest radio station owner in the country.

Après Nous, Le Déluge I can perform all the economic analysis in the world, and it won’t convey the sheer apprehension I feel about China’s current situation anywhere near as well as the following pictures, found on ChinaSmack. The gold-encrusted hallways, marble foyers, and imposing granite frontage are not from Versailles, or the Vatican, or even Caesar’s Palace in Las Vegas. They are from the newly completed corporate headquarters of state-owned Harbin Pharmaceutical, in northeast China.

Is the Pentagon Strong-Arming the White House into Subverting Mideast Democratic Uprisings? March 15, 2011 | Like this article? Join our email list: Best of Russia on display The motto of the exhibit—“the main thing is not winning but participating”—is often seen as consolation for losers, but in the Best of Russia 2010 contest, this phrase is synonymous with success. An extremely large number of photos were eliminated in preliminary screening. The jury received 26,546 photos from across the country and had to select 365—the number of days in the year, so all the photographers who made the list are automatically winners. The exhibit is far from an endorsement of the official view of “the Russian way of life.”

Signs of the Times Quick Guide The following timeline describes just a few of the hundreds of atrocities and crimes committed by the CIA. [...] Radio Free Europe — The CIA creates its first major propaganda outlet, Radio Free Europe. Over the next several decades, its broadcasts are so blatantly false that for a time it is considered illegal to publish transcripts of them in the U.S. Late 40s Operation MOCKINGBIRD — The CIA begins recruiting American news organizations and journalists to become spies and disseminators of propaganda. If the Feds Get Their Way, Big Pharma Could Sell Pot February 22, 2011 | Like this article? Join our email list: Stay up to date with the latest headlines via email. S. Philippines faces food insecurity after floods BANGKOK (AlertNet) - Recent flooding in the southern Philippines has affected half a million people and destroyed crops, raising concerns about food shortages in the coming months, the U.N. World Food Programme has said. The waters have now subsided considerably. But U.N. agencies are also worried about living conditions for tens of thousands who remain in evacuation centres with few or no health and sanitation facilities.