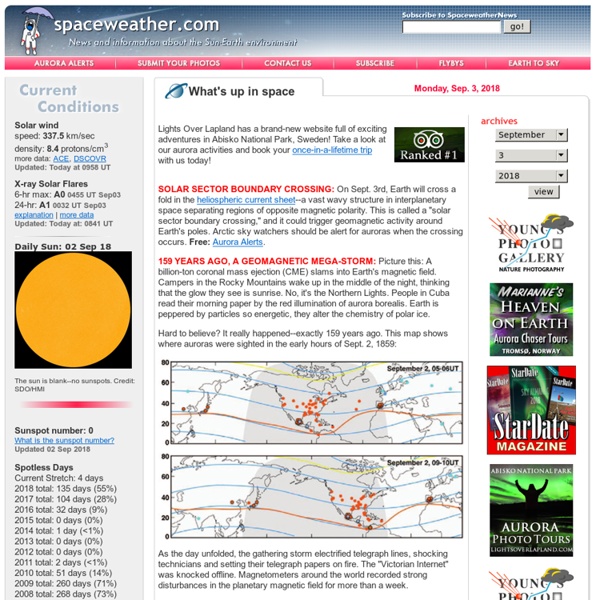 A Galah to help capture millions of rainbows to map the history of the Milky Way Our galaxy, the Milky Way, contains at least 100 billion stars. Over the centuries, astronomers have scoured the skies, developing a thorough understanding of the lives of those stars, from their formation in vast nebulae to their fiery and spectacular deaths. But how has our galaxy changed over time? Solar wind samples give insight into birth of solar system Two papers in this week's issue of Science report the first oxygen and nitrogen isotopic measurements of the Sun, demonstrating that they are very different from the same elements on Earth. These results were the top two priorities of NASA's Genesis mission, which was the first spacecraft to return from beyond the Moon, crashing in the Utah desert in 2004 after its parachute failed to deploy during re-entry. Most of the Genesis payload consisted of fragile solar-wind collectors, which had been exposed to the solar particles over a period of two years.

Photos: Drought Disaster 2012 A Struggle for Farms Next Crops wither. High-speed electrons have been spotted outside Earth's magnetic field, and NASA can't explain it In the region of space just outside Earth’s magnetic field, NASA has detected electrons that are being accelerated to almost the speed of light - and no one can explain why. In fact, our current understanding of particle physics says this kind of acceleration should be impossible so far out from the magnetosphere, and now physicists are trying to figure out what kind of force can be pushing them to such speeds. "This is a puzzling case because we're seeing energetic electrons where we don't think they should be, and no model fits them," says one of the researchers, David Sibeck from NASA's Goddard Space Flight Centre. "There is a gap in our knowledge, something basic is missing."

ISS HD Earth Viewing Experiment Black Image = International Space Station (ISS) is on the night side of the Earth. No Audio = Normal. There is no audio by design. Most Distant Quasar Found A team of European astronomers has used ESO's Very Large Telescope and a host of other telescopes to discover and study the most distant quasar found to date. This brilliant beacon, powered by a black hole with a mass two billion times that of the Sun, is by far the brightest object yet discovered in the early Universe. The results will appear in the 30 June 2011 issue of the journal Nature. "This quasar is a vital probe of the early Universe. It is a very rare object that will help us to understand how supermassive black holes grew a few hundred million years after the Big Bang," says Stephen Warren, the study's team leader. Quasars are very bright, distant galaxies that are believed to be powered by supermassive black holes at their centres.

l'univers et ses mystères au COMPLET en haute definition Les plus grandes explosions HD 720p / Nouveau documentaire science complet en francais by DocMeFiLDraGoN3 47,053 views Documentaire science issu de : l'univers et ses mystères ceci est l'episode 47Science documentary : the universe and its mysteries this is episode 47 Full documentary subscribe and like please thx With all the documentaries available on my channel, you can learn more about astronomy, space, time, matter and many answers to questions that may arise are all like: is it possible to see black holes, and then how the big bang emerged from the first moment (because that triggered ca can not be a supreme deity) scientists will tell you (the majority), the role of supernovae, constellations , nebulae, the speed of light, the moon, the galaxy, the Milky Way, the solar system, atoms, dark matter, dark energy (black), gravity (gravity), asteroids, stars, star clusters, the discoveries of Albert Einstein, the hubble satellite imagery and many others .

Bright galaxy sheds light on early Universe Astronomers said on Wednesday they had snared light from a bright, ancient galaxy with a super-massive black hole at its core, a finding that would help explain aspects of the young Universe. The phenomenon is called a quasar, which are very bright but very distant galaxies with a mighty black hole at their heart. Until now, the most distant quasar ever seen sent light 870 million years after the Big Bang, which is believed to have occurred nearly 13.7 billion years ago. This record has now been beaten by European astronomers, who after a five-year probe found a quasar whose light was emitted just 770 million years after the cosmic birth. ULAS J1120+0641 has a "redshift" -- a signature of red light that is a telltale of distance -- of 8.6, meaning that the light took 12.9 billion years to reach us.