The 23 Photos That Will Make Your Stomach Drop 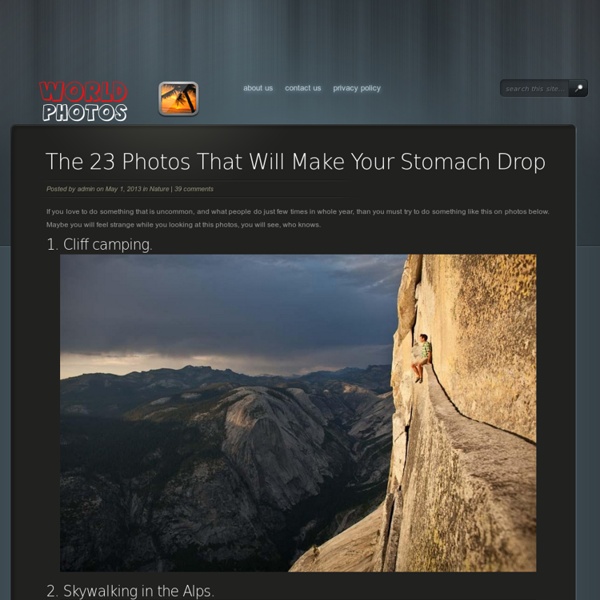 Most Beautiful Villages Around The World photo Popeye Village, is a group of rustic and ramshackle wooden buildings located at Anchor Bay in the north-west corner of the Mediterranean island of Malta. Photo by: Mosin Village on the bank of the Niger river, Mali. Photo by: Yann Arthus-Bertrand

World's Most Beautiful Trees Photography - One Big Photo The Portland Japanese Garden is a traditional Japanese garden occupying 5.5 acres (22,000 m²), located within Washington Park in the west hills of Portland, Oregon, USA. Photo by: unknown Huge 750 years old sequoia tree, California. Photo by: Michael Nichols Kiss under a cherry blossom tree. Photo by: Korri Crowley The Most Amazing Photographs of the World Around us in 2011 This is Thor's Well also known as "the gates of the dungeon" located on Cape Perpetua, Oregon. Emerald Lake in the crater of an extinct volcano located in Tongariro National Park in New Zealand. This is a restaurant located on a cliff on the east coast of Zanzibar.

Gallery: The power of water “Maybe ignorance is bliss, but we can’t be ignorant any more. The consequences are too dire for human health and the health of the planet.” Photographer Ed Burtynsky is contemplating climate change, an unheralded but ever-present character in his latest book and film, Watermark, a clip of which he showed at TED2014 in Vancouver. And the mild-mannered artist is fired up. “There is a fundamental flaw in democracy, where career politicians vie for power in the next election and long-term thinking has somehow disappeared,” he told me last week.

Amazing Places To Experience Around The Globe (Part 1) Preachers Rock, Preikestolen, Norway Blue Caves - Zakynthos Island, Greece Skaftafeli - Iceland Plitvice Lakes – Croatia Crystalline Turquoise Lake, Jiuzhaigou National Park, China 17 Of The Most Unusual Beaches Around The World When someone says “beach” you probably think of yellow or white sand, rolling waves, bright sunlight and a beer or fruity cocktail. But beaches come in far more different shapes and colors than some of us might have expected. Here are 17 beaches that, in one way or another, might not be anything like the beaches you’re used to. One of the most striking differences in many of these beaches are the different sand colors.